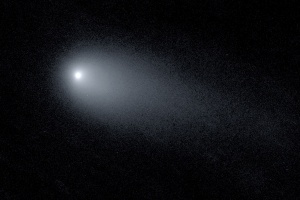 Maunakea, Hawaii – Astronomers at Yale University are getting a fresh glimpse of a visitor from another star; using W. M. Keck Observatory, they captured a new image of 2I/Borisov, the very first interstellar comet we know of to enter into our Solar System.

The alien traveler, first spotted this summer, is steadily getting brighter from our vantage point as it continues to draw nearer to Earth; the comet will reach its closest approach in December.

Researchers say 2I/Borisov formed in a solar system beyond ours and was ejected into interstellar space as a consequence of a near-collision with a planet in its original solar system.

To provide context on its size, the team superimposed Earth on the data image to scale with the comet (pictured below); its solid nucleus is only about a mile wide, but its tail is nearly 100,000 miles long, which is 14 times the size of our planet.

“It’s humbling to realize how small Earth is next to this visitor from another solar system,” said van Dokkum, Sol Goldman Family Professor of Astronomy at Yale.

2l/Borisov has taken on a “ghostly” appearance after this ancient ball of ice began reacting to the Sun’s warmth. The comet continues to evaporate as it sails close to Earth, releasing gas and fine dust in its tail.

“Astronomers are taking advantage of Borisov’s visit, using telescopes such as Keck Observatory to obtain information about the building blocks of planets in systems other than our own,” said Laughlin, Yale University Professor of Astronomy.

The comet was slightly more than two Earth-Sun distances from our planet when van Dokkum and his team took the image. The team also captured LRIS spectra of 2I/Boriso, which could unmask a treasure trove of information about the nature of its home solar system.

“Interstellar objects like 2I/Borisov are cosmic artifacts that hold a goldmine of data about solar systems other than our own,” said van Dokkum. “We can study the gas and material surrounding 2I/Borisov to characterize its chemical make-up, and compare it to other comets from our Solar System.”

2I/Borisov is only the second observed object to visit our Solar System after `Oumuamua, which astronomers at the University of Hawaii Institute for Astronomy spotted in 2017 using the Panoramic Survey Telescope and Rapid Response System (Pan-STARRS1) telescope at Haleakala on Maui.

“This is one of those moments that show off the power of a classically scheduled observatory like Keck,” said John O’Meara, chief scientist at Keck Observatory. “Pieter’s team changed their plans at the last minute and got this beautiful data. Now it’s time to see what that data reveal.”