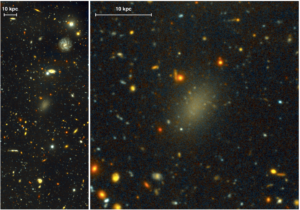 pieter van dokkum, roberto abraham, gemini, sloan digital sky survey
The dark galaxy Dragonfly 44. The image on the left is a wide view of the galaxy taken with the Gemini North telescope using the Gemini Multi-Object Spectrograph (GMOS). The close-up on the right is from the same very deep image, revealing the large, elongated galaxy, and halo of spherical clusters of stars around the galaxy’s core, similar to the halo that surrounds our Milky Way Galaxy. Dragonfly 44 is very faint for its mass, and consists almost entirely of Dark Matter.

MAUNAKEA, Hawaii — Using the world’s most powerful telescopes, an international team of astronomers has discovered a massive galaxy that consists almost entirely of Dark Matter. Using the W. M. Keck Observatory and the Gemini North telescope – both on Maunakea, Hawaii – the team found a galaxy whose mass is almost entirely Dark Matter. The findings are being published in The Astrophysical Journal Letters today.

Even though it is relatively nearby, the galaxy, named Dragonfly 44, had been missed by astronomers for decades because it is very dim. It was discovered just last year when the Dragonfly Telephoto Array observed a region of the sky in the constellation Coma. Upon further scrutiny, the team realized the galaxy had to have more than meets the eye: it has so few stars that it quickly would be ripped apart unless something was holding it together.

To determine the amount of Dark Matter in Dragonfly 44, astronomers used the DEIMOS instrument installed on Keck II to measure the velocities of stars for 33.5 hours over a period of six nights so they could determine the galaxy’s mass. The team then used the Gemini Multi-Object Spectrograph (GMOS) on the 8-meter Gemini North telescope on Maunakea in Hawaii to reveal a halo of spherical clusters of stars around the galaxy’s core, similar to the halo that surrounds our Milky Way Galaxy.

“Motions of the stars tell you how much matter there is, van Dokkum said. “They don’t care what form the matter is, they just tell you that it’s there. In the Dragonfly galaxy stars move very fast. So there was a huge discrepancy: using Keck Observatory, we found many times more mass indicated by the motions of the stars, than there is mass in the stars themselves.”

Finding a galaxy with the mass of the Milky Way that is almost entirely dark was unexpected. “We have no idea how galaxies like Dragonfly 44 could have formed,” Roberto Abraham, a co-author of the study, said. “The Gemini data show that a relatively large fraction of the stars is in the form of very compact clusters, and that is probably an important clue. But at the moment we’re just guessing.”

“This has big implications for the study of Dark Matter,” van Dokkum said. “It helps to have objects that are almost entirely made of Dark Matter so we don’t get confused by stars and all the other things that galaxies have. The only such galaxies we had to study before were tiny. This finding opens up a whole new class of massive objects that we can study.

“Ultimately what we really want to learn is what Dark Matter is,” van Dokkum said. “The race is on to find massive dark galaxies that are even closer to us than Dragonfly 44, so we can look for feeble signals that may reveal a Dark Matter particle.”

DEIMOS (DEep Imaging Multi-Object Spetrograph) boasts the largest field of view (16.7 arcmin by 5 arcmin) of any of the Keck Observatory instruments, and the largest number of pixels (64 Mpix). It is used primarily in its multi-object mode, obtaining simultaneous spectra of up to 130 galaxies or stars. Astronomers study fields of distant galaxies with DEIMOS, efficiently probing the most distant corners of the universe with high sensitivity.