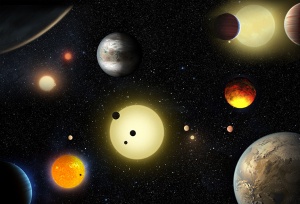 The NASA Kepler mission revealed that our Galaxy is teeming with planetary systems and that Earth-sized planets are common, but most of the planets Kepler detected orbit stars that are too faint to permit detailed study.

Excitingly, the NASA Transiting Exoplanet Survey Satellite (TESS) launched in April 2018 and is expected to find hundreds of small planets orbiting stars that are much closer and brighter. Unlike Kepler planets, the TESS planets are ideal targets for follow-up observations to determine their masses, compositions, and atmospheric properties.

Courtney Dressing, Assistant Professor of Astronomy at UC Berkeley, describes the TESS mission and explains how her group is using W. M. Keck Observatory to conduct in-depth analyses of the TESS planets to probe the compositional diversity of small planets, investigate the formation of planetary systems, and set the stage for the next phase of exoplanet exploration – the quest for biosignatures in the atmospheres of strange new worlds.