Astronomy Talk: The Wonder of Comet ISON, A Relic From the Beginning of the Solar System 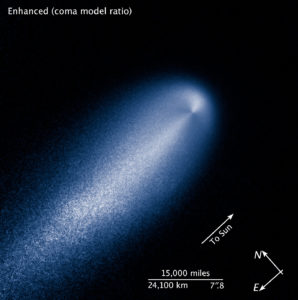 nasa/esa/stsci/aura
This NASA Hubble Space Telescope image of Comet (C/2012 S1) ISON was photographed on April 10, when the comet was slightly closer than Jupiter's orbit at a distance of 386 million miles from the Sun (394 million miles from Earth). The comet's dusty coma, or head of the comet, is approximately 3,100 miles across, or 1.2 times the width of Australia. A dust tail extends more than 57,000 miles, far beyond Hubble's field of view.

Dr. Carey Lisse, head of NASA’s Comet ISON Observation Campaign, will present a timely talk on how and when comets were formed, and where they come from. Also a Senior Research Scientist with Johns Hopkins University Applied Physics Laboratory, Lisse will relate how comets may have helped start life on the Earth, and also how they may have ended it for millions of creatures at least 4 times in the past. He’ll also give a bit of the history of comet observing by mankind, and explain how Comet 2012 S1 (ISON) fits into this picture of comets as relics from the beginning of our solar system.