Astronomy Talk: Zooming into the Center of our Galaxy with Keck Observatory 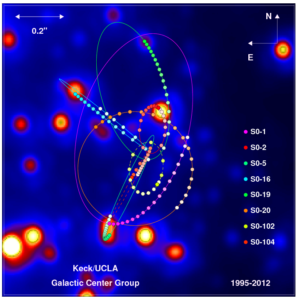 wmko/ucla
The orbits of stars within the central 1.0 X 1.0 arcseconds of our Galaxy. In the background, the central portion of a diffraction-limited image taken in 2012 is displayed. While every star in this image has been seen to move over the past 17 years, estimates of orbital parameters are best constrained for stars that have been observed through at least one turning point of their orbit. The annual average positions for these stars are plotted as colored dots, which have increasing color saturation with time. Also plotted are the best fitting simultaneous orbital solutions. These orbits provide the best evidence yet for a supermassive black hole, which has a mass of 4 million times the mass of the Sun.

The Galactic Center Group at UCLA has used the W. M. Keck Observatory for the past two decades to observe the center of the Milky Way at the highest angular resolution possible. This work established the existence of a supermassive black hole at the heart of our Galaxy. In this talk, Dr. Leo Meyer, Research Scientist for the UCLA Galactic Center Group, will focus on the black hole itself and the gas that it swallows. The feeding of the black hole is a turbulent process resulting in highly variable emission of infrared light. Observations of this variability provide a great way to learn about the black hole and its immediate environment.