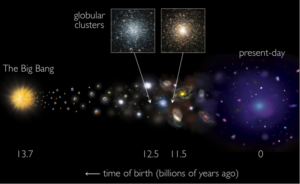 nasa/cxc/sao and a. romanowsky.
Image: cosmic timeline showing the birth of the Universe in a Big Bang 13.7 billion years ago to the present day. Using the Keck Observatory, an international team of researchers led by Professor Forbes of Swinburne University of Technology has determined ancient star clusters, known as globular clusters, formed in two epochs – 12.5 and 11.5 billion years ago. They formed alongside galaxies, rather than prior to galaxies, as previously thought.

Maunakea, Hawaii – Using a new age-dating method and the W. M. Keck Observatory on Maunakea, an international team of astronomers have determined that ancient star clusters formed in two distinct epochs – the first 12.5 billion years ago and the second 11.5 billion years ago. These results are being published in Monthly Notices of the Royal Astronomical Society.

Although the clusters are almost as old as the Universe itself, these age measurements show the star clusters – called globular clusters – are actually slightly younger than previously thought.

“We now think that globular clusters formed alongside galaxies rather than significantly before them,” research team leader, Professor Duncan Forbes of Swinburne University of Technology said.

The new estimates of the star cluster average ages were made possible using data obtained from the SAGES Legacy Unifying Globulars and GalaxieS (SLUGGS) survey, which was carried out on Keck Observatory’s 10-meter, Keck II telescope. Observations were carried out over years using the powerful DEIMOS multi-object spectrograph fitted on Keck II, which is capable of obtaining spectra of one hundred globular clusters in a single exposure.

“The Universe is now well known to be 13.7 billion years old,” research team member and Professor Jean Brodie said. “We determined globular clusters form on average some 1.2 and 2.2 billion years after the Big Bang.”

“Our age measurements indicate that globular clusters managed to avoid the period, called cosmic re-ionization, in which the Universe was bathed in ultra-violet radiation which could have destroyed them” said fellow team member, Professor Aaron Romanowsky.

“Now that we have estimated when globular clusters form, we next need to tackle the questions of where and how they formed.” Forbes said.

The SLUGGS survey is comprised of an international team of astronomers who aim to understand the formation and evolution of galaxies and their globular cluster systems.

Keck Observatory is a private, 501(c)3 non-profit organization and a scientific partnership of the California Institute of Technology, the University of California and NASA.