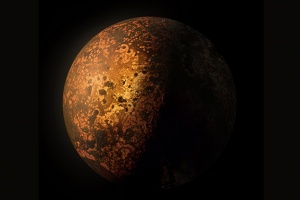 among the alien worlds featured in w. m. keck observatory's exoplanet imaginarium is epic 220674823 b. this super-earth lives up to its name, with “epic” surface temperatures that are so hot, it is expected to be covered in molten lava. its extreme environment is due to its searing proximity to the planet's star; one year on epic 220674823 b lasts only 13 earth hours. scene inspired by scientific data published on adams et al. (2017), apj, 153, 82.

MAUNAKEA SKIES ASTRONOMY TALK | The Exoplanet Imaginarium is the result of a collaboration between the W. M. Keck Observatory and award-winning exoplanet artist Adam Makarenko.

Together, we have created a science-based artistic rendering of a variety of exoplanet scenes.

Through this project, we bring alien worlds to life, embarking on a deep-space visual journey to extrasolar planets that have either been discovered or characterized using Keck Observatory data.

Serving as an interface between science, technology, and the arts, this project is designed to fulfill the ultimate dream of anyone who has ever wondered what extrasolar planets look like, to imagine ourselves on board a spacecraft flying by a strange world, or standing on an alien moon’s surface looking at a giant planet rising above the horizon.

The Maunakea Skies Astronomy Talk Series is hosted by `Imiloa Astronomy Center. Tickets can be purchased over the phone at (808) 932-8901. Learn more HERE.