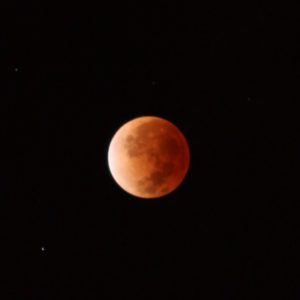 Taken by Keck Observatory Guidestar, Maureen Salmi from the ninth floor of the Ala Moana Hotel in Honolulu on December 10th, 2011, using a DSLR camera with standard zoom lens, and tripod.

People in Hawaii are in prime position to view a total lunar eclipse tonight—one of two expected this year.

After the full moon rises at sunset tonight, the eclipse will start just 11 minutes later, at 6:53 pm, but you won’t see any changes. The partial phase will begin at about 7:53 pm making the moon appear red or black depending on atmospheric conditions, as the moon appears to travel into the shadow of the Earth. The total eclipse starts at 9:07 pm, with the moon completely shadowed from the Sun, at which point it will be very dark. At 10:25, it will leave the shadow of the Earth and begin to lighten up again.

The gusty trade winds are bringing drier than normal air and quickly blowing away most clouds, which should increase the chance to good viewing. Leeward locations should be best.

The next total lunar ecslipe will come on the evening of October 7th, with the partial phase starting at 11:14 pm and the total ecslipe at 12:25 on October 8.