Life in the Universe: The Science of Astrobiology 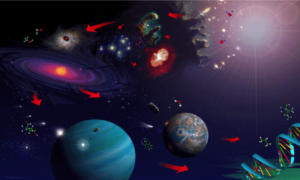 nasa
The 14-billion year history of the Universe, from the Big Bang (upper right), through the formation of galaxies, the cycling of elements in stars (top center), planetary system formation (left), to the formation of habitable planets and life itself (lower right).

Is life common in the universe, or rare? Humans have pondered this question for millennia.

Today we are privileged to be able to bring the tools of modern science to answer questions that were once the province of philosophers and theologians. In this Astronomy Talk, Dr. Carl Pilcher, Interim Director of the NASA Astrobiology Institute, will help us study the four billion-year evolution of life and our planet to consider how habitable environments and life itself might arise elsewhere in the Universe. Join us for a riveting Astronomy Talk in exploring these fascinating questions as we paint a picture of life as a cosmic phenomenon.