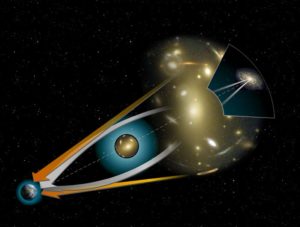 In our standard model of cosmology, only five percent of the mass-energy budget of the Universe is accounted for by particles that have been detected in Earth-based laboratories. The remaining 95 percent, called dark matter and dark energy, has only been detected gravitationally via astronomical observations. Although the abundance of dark matter and dark energy has been measured with great precision, their fundamental nature remains mysterious. In this talk, UCLA astronomer Tommaso Treu will briefly review the history of the discovery of dark matter and dark energy and describe how we can gain new insights by studying the trajectories of photons as they travel across the universe, a phenomenon known as strong gravitational lensing.