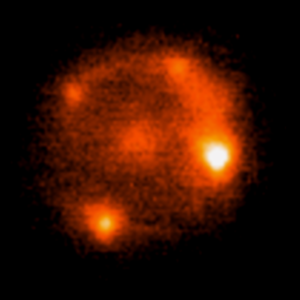 w. m. keck observatory
An image of the gravitationally lensed iPTF16geu Type Ia supernova taken in near-infrared with W. M. Keck Observatory. The lensing galaxy visible in the center has distorted and bent the light from iPTF16geu, which is behind it, to produce multiple images of the same supernova (seen around the central galaxy). The position, size and brightness of these images help astronomers infer the properties of the lensing galaxy.

Maunakea, Hawaii– Scientists will now be able to measure how fast the universe is truly expanding with the kind of precision not possible before.

To get a high-resolution view, the discovery team used the W. M. Keck Observatory’s OSIRIS and NIRC2 instruments with laser-guided adaptive optics at near-infrared wavelengths.

The resolution of the Keck adaptive optics images was equivalent to being able to distinguish the individual headlights of a car in San Francisco as viewed from Hawaii. The measurements confirmed the four separate images originated from iPTF16geu and that its light traveled for 4.3 billion years before reaching Earth.

“Resolving for the first time, multiple images of a strongly lensed supernova is a major breakthrough,” said Ariel Goobar, Professor at the Oskar Klein Centre at Stockholm University and lead author of the study. “We can measure the light-focusing power of gravity more accurately than ever before, and probe physical scales that may have seemed out of reach until now.”

iPTF16geu was initially observed by the intermediate Palomar Transient Factory (iPTF), a Caltech-led international project that uses the Palomar Observatory to scan the skies and discover, in near real-time, fast-changing cosmic events such as supernovas using a fully-automated, wide-field survey.

It took some of the world’s leading telescopes to gather more detailed information about iPTF16geu. In addition to Keck Observatory, the discovery team also used the NASA/ESA Hubble Space Telescope and the European Southern Observatory (ESO) Very Large Telescope in Chile.

“The discovery of iPTF16geu is truly like finding a somewhat weird needle in a haystack,” said Rahman Amanullah, co-author and research scientist at Stockholm University. “It reveals to us a bit more about the Universe, but mostly triggers a wealth of new scientific questions.”

Astronomers detect thousands of supernova every year, but only a few of those found are gravitationally-lensed. Because they are only visible for a short time, spotting them can be difficult.

“iPTF is known for finding supernova candidates, but the key is to image them with Keck Observatory’s cutting-edge adaptive optics while the supernova is still bright,” said Shri Kulkarni, John D. and Catherine T. MacArthur Professor of Astronomy and Planetary Science and co-author of the study. “Thanks to Keck Observatory’s ability to respond to such supernova events on short notice, the discovery team was able to produce fine images, which allowed them to successfully observe the light rise and fall from each of iPTF16geu’s four images.”

This discovery is highly interesting to scientists because type Ia supernovas can be used as a “standard candle” to calculate galactic distances.

A standard candle is an astrophysical object that emits a certain, known amount of light. In this case, the object is a type Ia supernova, a class of dying stars that always explode with the same absolute brightness. If astronomers know such an object’s true luminosity, they can infer its distance from Earth. The dimmer the object, the farther away it is.

The Magnifying Power of Gravitational Lensing

This rare discovery is made possible through gravitational lensing, a phenomenon that was first predicted by Albert Einstein in 1912. As light of the distant object passes by a massive object such as a galaxy cluster in the foreground, it gets bent by gravity, just as light gets bent passing through a lens. When the foreground object is massive enough, it will magnify the object behind it. In iPTF16geu’s case, its light was magnified by up to 50 times and bent into four separate images by a galaxy in front of it.

The discovery team analyzed the four lensed images of iPTF16geu, measured how long it took for the light from each image to journey to Earth (light is not bent in the same way in each image, so the travel times are slightly different), then used the differences in the arrival times to calculate the expansion rate of the universe – known as the Hubble constant.

This animation shows the phenomenon of strong gravitational lensing. This effect caused the supernova iPTF16geu to appear 50 times brighter than under normal circumstances and to be visible on the sky four times. CREDIT:ESA/Hubble/L. Calçada

W. M. Keck Observatory is a distinguished leader in the field of adaptive optics (AO), a breakthrough technology that removes the distortions caused by the turbulence in the Earth’s atmosphere. Keck Observatory pioneered the astronomical use of both natural guide star (NGS) and laser guide star adaptive optics (LGS AO) and our current systems now deliver images three to four times sharper than the Hubble Space Telescope.

OSIRIS, the OH-Suppressing Infrared Imaging Spectrograph, is one of W. M. Keck Observatory’s “integral field spectrographs.” The instrument works behind the adaptive optics system, and uses an array of lenslets to sample a small rectangular patch of the sky at resolutions approaching the diffraction limit of the 10-meter Keck Telescope. OSIRIS records an infrared spectrum at each point within the patch in a single exposure, greatly enhancing its efficiency and precision when observing small objects such as distant galaxies. It is used to characterize the dynamics and composition of early stages of galaxy formation.

The W. M. Keck Observatory operates the largest, most scientifically productive telescopes on Earth. The two, 10-meter optical/infrared telescopes on the summit of Maunakea on the Island of Hawaii feature a suite of advanced instruments including imagers, multi-object spectrographs, high-resolution spectrographs, integral-field spectrographs and world-leading laser guide star adaptive optics systems. The Observatory is a private 501(c) 3 non-profit organization and a scientific partnership of the California Institute of Technology, the University of California, and NASA.