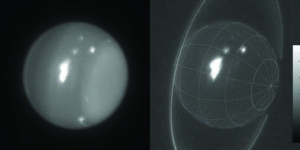 imke de pater (uc berkeley) & w. m. keck observatory
Infrared images of Uranus (1.6 and 2.2 microns) obtained on Aug. 6, 2014, with adaptive optics on the 10-meter Keck II telescope. The white spot is an extremely large storm that was brighter than any feature ever recorded on the planet in the 2.2 micron band. The cloud rotating into view at the lower-right limb grew into the large storm that was seen by amateur astronomers at visible wavelengths.

Knowledge about our own Solar System has increased by leaps and bounds over the past few decades due to a combination of spacecraft missions and technical advancements at the W. M. Keck Observatory and other telescopes.

Imke de Pater, Professor of Astronomy at University of California, Berkeley will start with a short overview of the numerous bodies in our Solar System now known to orbit the Sun, and which have become familiar to us as individual worlds. She will then focus on recent results her group obtained with regard to extremely large volcanic eruptions on Jupiter’s moon Io, and giant storms on Uranus using Keck Observatory.