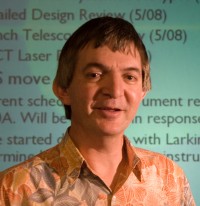 In 1987 there were 2 billion fewer people on the planet, The Simpsons were brand new to television, a first class stamp cost 22 cents and the first ?naked-eye? supernova in almost 400 years had astronomers around the world spellbound. It was also the year that a handful of bright young engineers from around the world converged on a project to build the world?s two largest, most advanced optical telescopes.

Today, 25 years later, some of those engineers are still working on the twin Keck telescopes. Hilton Lewis celebrated his quarter century at Keck Observatory last year, Allan Honey passed that mark two weeks ago and a few others, like Richard Cohen and Barbara Schaefer, are very close to reaching the same milestone.

Lewis, a native of South Africa who grew up in Namibia, started out as the head of the software team. He is now deputy director of Keck Observatory, responsible for technical activities. Software is absolutely critical at Keck because the Keck telescopes were revolutionary and heavily dependent on computers to control not only their movements, but the 36 hexagonal mirrors that must work together with an accuracy of four nanometers ? about the size of a few molecules, or about 1/25,000 the diameter of a human hair ? to act as a single 10-meter-wide starlight gathering surface.

?The thing that made it all possible was the advent of relatively inexpensive computing power ? the mini computer and microcomputer,? recalled Lewis, who was educated as an electronics engineer at the University of Cape Town. Lewis came to Keck Observatory by way of the Australian National University?s 2.3-meter telescope at Siding Spring Observatory in New South Wales, Australia, where he wrote the software used to control the telescope.

Microcomputers were still new in the late 1980s, and somebody had to write the software to make the new fangled computers talk to the many new fangled machines involved in the Keck telescopes.

The work started for Lewis and Honey, who Lewis hired, in Pasadena on the campus of Caltech. At the same time, in 1986 through 1988, the Keck I dome, telescope and optics were under construction. The software team didn?t move to the Big Island until 1989, when they moved into the Waimea headquarters, built on land donated by Parker Ranch.

?It was a wonderful place to be after Los Angeles,? said Lewis. ?Kids could go out and play without worry. All of us had a wonderful time.?

Lewis? three children flourished on the Big Island, and his wife Gail dove into raising them and contributing to the community with her talents as an educator.

?It was a good place to raise a family,? said Honey, father of two boys. Still, the change from California was a little jarring at first. ?There was a hitching post outside the Bank of Hawaii.? And traffic was so mild that he remembers seeing a pig strolling down the highway through town. ?That?s when it hit me that I really wasn?t in Southern California anymore.?

Honey?s path to Keck Observatory was circuitous. After graduating from Queen Elizabeth High School in Surrey, British Columbia, he spent a year at community college and was supposed to go on to the University of British Columbia. But he crashed his car, and had to work to pay for that mistake. So he worked in telecommunications during the day, while taking night school. It was a full 10 years later, supported by his wife Kathy, a registered nurse, that he finished his Computer Science degree at the University of Victoria. After that he worked in robotics, including some of the systems that led to today?s deep sea ROVs.

The family?s transition to the Big Island was not always easy. In the early days, both Gail Lewis and Kathy Honey had to put up with endless late night repair calls as telescope operations went through growing pains.

?After working 10-hour days we?d go home for dinner and the phone would start ringing,? Lewis recalls. Many of those 10-hour days were followed by 6-hour nights. We really owe our wives a huge debt of gratitude for putting up with the constant disruption to our family life. It was exhausting but also exhilarating to be working on the greatest observatory project of the time.?

Honey?s job has not changed much since 1990, he said. Although the technological tools he has at his disposal have improved tremendously, he is, frankly, a little surprised that he?s been at Keck Observatory so long.

?It seemed like the blink of an eye. I thought I?d get bored in five years and move on,? said Honey. ?But I never got bored. Astronomers are very clever people. They are always changing things? leading to new challenges for the software team.

Somewhere along the line Honey also started doing outreach with kids on the Big Island. He doesn?t remember quite how it started, exactly. But any young person interested in robotics or scouting, or a tour of Keck Observatory headquarters, has probably encountered Uncle Al. He?s been described by some as the busiest man on the island.

The longevity of both Lewis and Honey at Keck Observatory is in part a testament to the success of the great technological experiment that the Keck telescopes are. But there is also the power of the Big Island. As Honey puts it: ?Once I was in Hawaii, what other jobs would I take??