If you think washing the mirrors and windows in your home is a daunting task, imagine cleaning two of the largest light-collecting surfaces in the astronomy world—the twin 10-meter Keck telescope mirrors.

Keck Observatory’s two primary mirrors are each comprised of 36 hexagonal segments. Each segment is 1.8 meters, or 6 feet, in diameter, weighs 880 pounds or roughly 0.4 metric tons and is covered with a thin, reflective layer of aluminum.

There are two methods Keck’s technicians use to maintain the shine, or reflectivity, of these segments of the mirror, and to keep Keck at the cutting edge of astronomical research.

First, similar to a scaled-up version of using Windex to keep bathroom mirrors shiny, the telescope mirrors are periodically “dusted,” not with Windex, but with a spray of carbon dioxide snow. The carbon dioxide particles and gas, which are nondestructive, nonabrasive, residue-free and environmentally friendly, blow dust and grit from the mirror surface through a process called sublimation.

The second method used to clean the mirror surfaces is much more involved and requires physically removing the segments from the telescope structure. Extracting the segments allows technicians to care for them individually and to be able to strip and replace each mirror coating with a fresh layer of aluminum. This process, called segment exchange, maintains the mirrors’ perfect reflection.

George Wall, an optics technician at Keck Observatory, prepares the glass in his hand and the naked segment behind him for a session in the coating chamber. When the segment is removed, its front side, the side covered in plastic in this image, will feature a fresh, shiny layer of aluminum. Credit: Rick Peterson.

With his shaved head and earring, George Wall looks like a younger Mr. Clean. Since he and fellow Keck Observatory Optics Technician Anthony Jaramillo are responsible for maintaining the shine on the twin 10-meter telescope mirrors, the resemblance suits Wall well.

The segments of the two Keck primary mirrors are each three inches thick and made of a glass and ceramic composite called Zerodur. Resistant to thermal expansion, the Zerodur itself is not reflective and must be coated with a reflective metal. This mirror coating is the essence of the telescope; it is the material that captures and reflects incoming photons into the telescope instruments for analysis by astronomers, says Craig Nance, the Observatory’s Operations Engineering Manager.

Keck Observatory uses bare aluminum for the mirror coatings because the telescopes are optimized to observe from the blue wavelengths to the infrared wavelengths in the electromagnetic spectrum. Bare aluminum reflects photons reasonably well over this entire spectral range, Nance explains. Other coatings have different spectral ranges. Silver, for example, has a “blue cutoff” and does not reflect blue light effectively.

The aluminum coating, at only 120 nanometers thick, is roughly the depth of a groove in a DVD. The metal layer is extremely delicate and over time loses its reflectivity from exposure to air and other weathering effects. During a cycle of segment exchange, Wall and Jaramillo strip the aluminum coatings from the mirror segments and replace the metal layer with a fresh aluminum coat. 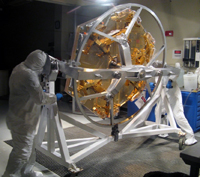 After stripping the segment, Wall and Jaramillo maneuver it on its handling cart and wheel it into the mirror barn. Credit: Craig Nance, WMKO.

To remove a segment from the 10-meter honeycomb mirror structure, the telescope must be positioned at just the right angle, zenith, so that a large crane, which is mounted into the dome ceiling, can be lowered and its eagle-like talons placed around the segment edges.

The individual 880-pound glass piece is carefully hoisted out and away from the telescope support structure, and lowered to the dome floor.

Once at ground-level, the mirror segment is maneuvered onto a specially designed handling cart and wheeled from the dome, down the Observatory corridor and into the segment storage area. This room houses a 10-foot-deep pressurized vacuum chamber, a coating removal and segment cleaning room, and the “mirror barn,” where spare segments are stored.

Inside the cleaning room, Wall and Jaramillo chemically strip away the old aluminum with an acid solution. The naked segment is then photographed. Visually documenting the condition of the segment after each exchange allows the segment handling crew to compare the images to previous ones and ensure that the glass is in good condition and the electronics are working properly. 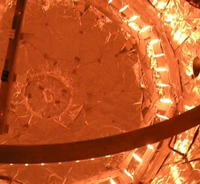 Video: Click to listen and watch during a flash coating test. The aluminum vaporizes because of the glowing tungsten filaments (seen above) and eventually covers the porthole through which this movie was shot, leaving only the reflection of the camera. Credit: Craig Nance, WMKO.

After inspection, the segment is positioned face-down into the vacuum chamber. The segment rests at the top of the chamber, several feet above the tungsten filaments and tiny ingots, or clips, of pure aluminum that sit at the bottom.

Once the segment is secured in the chamber, the cover is reinstalled and the air is pumped from the chamber, a process that takes over five hours. The partial vacuum is then ready for “glow discharge.”

During this process, an aluminum ring within the vacuum chamber is energized. Argon gas is added to the vacuum to interact with the aluminum ring. A brilliant violet haze fills the chamber as the noble gas particles become molecular billiard balls zipping around the chamber and gently bumping any remaining impurities from the segment glass.

After glow discharge, the segment is prepared for flash coating. Tungsten filaments at the bottom of the chamber are heated, and aluminum clips melt into the tungsten. The temperature of the filaments is increased until the aluminum atoms are vaporized and flung into the chamber, where they “freeze” after coming into contact with the cool glass of the segment. An instrument measures the buildup of the aluminum layer and automatically cuts the current in the tungsten filaments when the deposited aluminum layer reaches a uniform thickness of 120 nanometers. This flash coating process takes only 20 seconds.

At the end of the process, Wall and Jaramillo extract the segment, which now bears a brilliantly reflective coating. Several tests are performed to ensure the coating meets the standards required for the segment to be reinstalled on the telescope. Newly refurbished segments are calculated to be up to 17 percent brighter, increasing the amount of light collected for the astronomers.

During the current segment exchange cycle on Keck II, the team has removed and replaced 16 of the 36 segments with plans to replace and recoat the remaining 20 pieces of glass by September 2010.  The summit crew will then schedule segment exchange on Keck I. When this cycle of segment exchange is complete, it will be time to begin again on Keck II, perpetuating the process of constant improvement for the Keck telescope mirrors.