Astronomers Shed Light on Formation of Black Holes and Galaxies 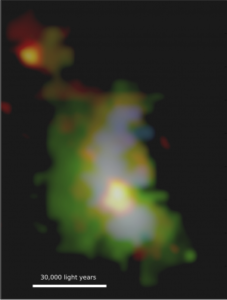 credit: a. vayner and team
Image of the quasar host galaxy from the UC San Diego research team’s data. The distance to this quasar galaxy is ~9.3 billion light years. The four-color image shows findings from use of the Keck Observatory and ALMA. As seen from Keck Observatory, the green colors highlight the energetic gas across the galaxy that is being illuminated by the quasar. The blue color represents powerful winds blowing throughout the galaxy. The red-orange colors represent the cold molecular gas in the system as seen from ALMA. The supermassive black hole sits at the center of the bright red-orange circular area slightly below the middle of the image.

Maunakea, Hawaii – Stars forming in galaxies appear to be influenced by the supermassive black hole at the center of the galaxy, but the mechanism of how that happens has not been clear to astronomers until now.

In a study published today in The Astrophysical Journal, Wright, graduate student Andrey Vayner, and their colleagues examined the energetics surrounding the powerful winds generated by the bright, vigorous supermassive black hole (known as a “quasar”) at the center of the 3C 298 host galaxy, located approximately 9.3 billion light years away.

“We study supermassive black holes in the very early universe when they are actively growing by accreting massive amounts of gaseous material,” says Wright. “While black holes themselves do not emit light, the gaseous material they chew on is heated to extreme temperatures, making them the most luminous objects in the universe.”

The UC San Diego team’s research revealed that the winds blow out through the entire galaxy and impact the growth of stars.

“This is remarkable that the supermassive black hole is able to impact stars forming at such large distances,” says Wright.

This implies that the supermassive black hole mass is established well before the galaxy, and potentially the energetics from the quasar are capable of controlling the growth of the galaxy.

To conduct the study, the UC San Diego researchers utilized multiple state-of-the-art astronomical facilities. The first of these was Keck Observatory’s instrument OSIRIS (OH-Suppressing Infrared Imaging Spectrograph) and its advanced adaptive optics (AO) system. An AO system allows ground-based telescopes to achieve higher quality images by correcting for the blurring caused by the Earth’s atmosphere. The resulting images are as good as those obtained from space.

The second major facility was the Atacama Large Millimeter/submillimeter Array, known as “ALMA,” an international observatory in Chile that is able to detect millimeter wavelengths using up to 66 antennae to achieve high-resolution images of the gas surrounding the quasar.

“The most enjoyable part of researching this galaxy has been putting together all the data from different wavelengths and techniques,” said Vayner. “Each new dataset that we obtained on this galaxy answered one question and helped us put some of the pieces of the puzzle together. However, at the same time, it created new questions about the nature of galaxy and supermassive black hole formation.”

Wright agreed, saying that the data sets were “tremendously gorgeous” from both Keck Observatory and ALMA, offering a wealth of new information about the universe.

These findings are the first results from a larger survey of distant quasars and their energetics’ impact on star formation and galaxy growth. Vayner and the team will continue developing results on more distant quasars using the new facilities and capabilities from Keck Observatory and ALMA.

The OH-Suppressing Infrared Imaging Spectrograph (OSIRIS) is one of W. M. Keck Observatory’s “integral field spectrographs.” The instrument works behind the adaptive optics system, and uses an array of lenslets to sample a small rectangular patch of the sky at resolutions approaching the diffraction limit of the 10-meter Keck Telescope. OSIRIS records an infrared spectrum at each point within the patch in a single exposure, greatly enhancing its efficiency and precision when observing small objects such as distant galaxies. It is used to characterize the dynamics and composition of early stages of galaxy formation.