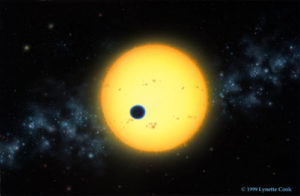 lynette cook, copyright restricted - by permission only
An artist's rendition shows the distant planet crossing in front of its star.

MAUNA KEA, Hawaii (November 7th, 1999) have witnessed for the first time a distant planet passing in front of its star, providing direct and independent confirmation of the existence of extrasolar planets that to date have been inferred only from the wobble of their star.

“This is the first independent confirmation of a planet, and it also gives us the first-ever measure of the size of one of these planets,” said Geoffrey Marcy, a professor of astronomy at the University of California, Berkeley.

Marcy and his colleagues, Paul Butler of the Dept. of Terrestrial Magnetism at the Carnegie Inst. of Washington and Steve Vogt of UC Santa Cruz and Lick Observatory, first detected a wobble on Nov. 5, 1999 with the Keck I telescope in the star called HD 209458. Ascribing the wobble to a nearby planet, they were able to estimate its orbit and approximate mass.

Right: An artist’s rendition shows the distant planet crossing in front of its star.

As with all new planets they detect, the team immediately brought it to the attention of a collaborator at Tennessee State University, astronomer Greg Henry, who works at the Center of Excellence in Information Systems. He operates several telescopes at the privately funded Fairborn Observatory in the Patagonia mountains of southern Arizona.

Henry turned his automated telescope on the star at the time Marcy and Butler predicted the planet would cross the face of the star IF the planet’s orbital plane were lucky enough to carry it between Earth and the star. Until now, none of the 18 other extrasolar planets Marcy and Butler have discovered has had its orbital plane oriented edge-on to Earth so that the planet could be seen to transit the star, nor have any of the other planets discovered by other researchers.

This time, however, on Nov. 7, Henry observed a 1.7 percent dip in the star’s brightness. A repeat measurement will take place on Nov. 14 as the planet orbits its star once every 3.523 days.

“This planetary transit occurred at exactly the time predicted from Marcy’s observations, confirming absolutely the presence of a companion,” Henry said. “This says that our indirect evidence for planets, the change in radial velocity of the star, really is due to planets. We’ve essentially seen the shadow of the planet.” The parent star’s brightness has been observed constantly in the past four days and has not dimmed or “blinked,” except during the transit.

The star HD 209458 is 47 parsecs (153 light years or 1.4 million billion kilometers or 859,000 billion miles) away in the constellation of Pegasus, and is about the same age, color and size as our own Sun. It is very near the star, 51 Pegasi, around which the first extrasolar planet was discovered in 1995.

With the orbital plane of the planet known, the astronomers for the first time could determine precisely the mass of the planet and its density.

Interestingly, while the planet’s mass is only about two-thirds (63 percent) of Jupiter’s mass, its radius is 60 percent bigger than that of Jupiter. This fits with theories that predict a bloated planet when, as here, the planet is very close to the star.

The density, about 0.2 grams per cubic centimeter, means it is a gas giant like Jupiter. However, such gas giants could not have formed at the distance this planet is from its star, Henry said.

Various groups around the world have been searching for planets by looking for dimming of stars., or as Marcy says, “staring at the sky and seeing if any star blinks.” To date, none of these searches has turned up a new planet.

“With this one, everything hangs together,” Marcy said. “This is what we’ve been waiting for.”

The research was supported by the National Aeronautics and Space Administration, the National Science Foundation, Sun Microsystems and the Richard Lounsbery Foundation.

Photometry reveals a transit ingress at JD 2451490.70 with depth of 0.017 mag, consistent with the transit time predicted from the velocities. Further measurements of transits and velocities would be valuable. The next three predicted times of ingress occur at UT times: 15 Nov 6:19, 18 Nov 18:53, 22 Nov 7:28, all times uncertain by 1 hour.