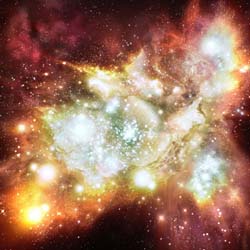 MAUNA KEA, Hawaii (October 30th, 2003) A serendipitous discovery has given astronomers, for the first time, the ability to study an enormous star-forming region from the very early days of the Universe, when it was less than 2 billion years old, or about 15 percent its current age. The discovery was made possible by an international team of collaborators, led by Bob Fosbury of the European Space Agency’s Space Telescope-European Coordinating Facility in Germany, which used the W. M. Keck Observatory to conduct part of the research.

Called the “Lynx Arc,” after the constellation in which it appears, this unique object is about 1 million times brighter and 8 million times farther away (at a redshift of 3.36) than the Orion Nebula, a nearby “star birth” region visible with small telescopes. The newly identified super-cluster contains over a million blue-white stars that are twice as hot as similar stars in our galaxy. It is a rarely glimpsed example of the early days of the Universe where furious firestorms of star birth blazed across the skies. Fosbury and his team report the discovery in the October 20 issue of the Astrophysical Journal.

“We may have found a key time in the growth of galaxies, a phase most may go through, and a phase that can only be studied using the most sensitive instruments on the biggest ground-based telescopes,” said co-author and team member Dr. Bradford Holden of the University of California Observatories/Lick Observatory at Santa Cruz. “What is fascinating about this galaxy is that it appears to be making incredibly massive stars, much larger than almost any star we see inside our own galaxy, and the galaxy has made a huge number of them. We are not watching the actual birth of a galaxy, but rather a galaxy going through an enormous growth spurt.”

The discovery of this unique object was the result of a systematic study of distant clusters of galaxies carried out with major X-ray, optical and infrared telescopes, including both 10-meter Keck Telescopes on Mauna Kea. The mega-cluster of stars appears as a puzzling red arc behind a distant galaxy cluster located 5.4 billion light-years away in the northern constellation of Lynx. The arc is the stretched and magnified image of a more mysterious celestial object 12 billion light-years away, far beyond the cluster of galaxies.

“Only by combining the gravitational lensing, a sort of natural telescope, with the Echellette Spectrograph and Imager at the Keck Observatory, could we do the detailed analysis required to figure out just how many stars are in this galaxy and just how hot they really are,” said Holden

At first, Fosbury and colleagues tried to identify the arc by analyzing the light from the object, but the team was not able to recognize the pattern of colors in the spectral signature of the remote object. While looking for matches with the color spectrum, Fosbury realized that the light was related to that of the nearby Orion Nebula, a star-forming region in our own Milky Way galaxy. However where the Orion Nebula is powered by only four hot and bright blue stars, the Lynx arc contains about a million such stars!/p>

Holden added, “What is particularly exciting about this work, for me at least, is that there are a lot of galaxies that look similar to this one, but because this galaxy is being made brighter by gravitational lensing, we can study it in much more detail than the others.”

The Keck observations helped show that the stars in the Lynx arc are more than twice as hot as the Orion Nebula’s central stars, with surface temperatures up to 144,000°F (80,000°C). Though there are much bigger and brighter star-forming regions than the Orion Nebula in our local Universe, none are as bright as the Lynx arc, nor do they contain such large numbers of hot stars.

Even the most massive, normal nearby stars are no hotter than around 72,000°F (40,000°C). However, stars forming from the original, pristine gas in the early Universe can be more massive and consequently much hotter – perhaps up to 216,000°F (120,000°C). The earliest stars may have been as much as several hundred solar masses, but the chemical make-up of the Universe today prevents stars from forming beyond about 100 solar masses. Such ‘primordial’ super-hot stars are thought to be the first luminous objects to condense after the Big Bang cooled. Astronomers believe that these first ‘monster’ stars formed considerably earlier than the Lynx Arc – up to 1.8 billion years earlier.

“This remarkable object is the closest we have come so far to seeing what such primordial objects might look like when our telescopes become powerful enough to see them,” said Bob Fosbury.