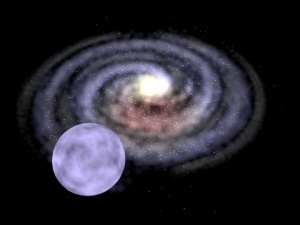 Maunakea, Hawaii – An international team of astronomers has pinpointed the origin of a runaway high-velocity star named PG 1610+062 and determined that it was likely ejected from its birth cluster with the help of a mid-mass black hole (MMBH).

The findings are published in the journal Astronomy & Astrophysics.

In order to put tight constraints on PG 1610+062’s projected rotational velocity, its radial velocity, as well as measure its chemical composition accurately, the team needed spectral data of the star, but its distance and position in the sky made W. M. Keck Observatory’s Echellette Spectrograph and Imager (ESI) the only tool for the job.

“In the northern hemisphere, only the combination of Keck Observatory and ESI gave us what we needed. The collecting area of Keck allowed us to gather enough photons for our object and ESI has exactly the right resolution, which is high enough to resolve all the spectral features,” says co-author Thomas Kupfer, a Kavli Institute for Theoretical Physics Postdoctoral Scholar at the University of California, Santa Barbara.

While formerly considered an old star with half a solar mass, typical for the galactic halo, the Keck Observatory data revealed that PG1610+062 is actually a surprisingly young star that’s ten times more massive, ejected from the Galactic disk almost at the escape velocity from the Milky Way.

Some even faster stars, called hyper-velocity stars (HVSs), do exist – the first three were discovered in 2005. Among them is the unique star US 708, which was found from observations using the Low Resolution Imaging Spectrometer (LRIS) on the Keck I telescope; it was going so fast it escaped the Milky Way’s gravitational pull. To achieve such velocities requires an extremely dramatic slingshot event.

Simulations carried out in 1988 suggested that a giant, 4 million solar mass black hole (SMBH) could do the trick. By disrupting a binary star system, i.e. swallowing one star and leaving its stellar partner with all the energy in the system, ejecting it far beyond the escape velocity of the Milky Way. Lacking other plausible explanations for the formation of HVSs, this scenario was readily accepted as the standard ejection mechanism, in particular after observational evidence for the existence of such a SMBH at the Galactic Center became overwhelming in the early 2000s.

By using the European Space Agency’s Gaia spacecraft’s unprecedented astrometric precision measurements, PG1610+062 has been traced back to nowhere near the Galactic Center, but to the Sagittarius spiral arm of our galaxy, therefore ruling out the idea that the Galactic Center SMBH slingshot the star.

Even more interesting is the derived extreme acceleration of PG1610+062, which excludes most likely all alternative scenarios except the interaction with a MMBH. Such objects have been predicted to exist in young stellar clusters in the spiral arms of the Milky Way, but none has been detected yet.

“Now, PG1610+062 may provide evidence that MMBHs could indeed exist in our galaxy. The race is on to actually find them,” says lead author Andreas Irrgang of the Friedrich-Alexander University of Erlangen-Nuremberg in Germany.

There is plenty more to learn about this star and its place of origin. As the Gaia mission proceeds, precision will improve and the place of origin will be narrowed down further, possibly allowing astronomers to search for the parent star cluster and ultimately for the black hole.

The team, which includes Felix Fürst of the European Space Astronomy Centre in Spain, Stephan Geier of the Institute of Physics and Astronomy at the University of Potsdam in Germany, and Ulrich Heber of the Friedrich-Alexander University of Erlangen-Nuremberg, is currently searching for additional candidates similar to PG1610+062 using Gaia and other large survey telescopes. The brighter, closer ones might be suitable for tracing back to cores of star clusters, which might provide evidence of intermediate mass black holes in their centers.