Astronomers Uncover the Brightest Lensed Quasar in the Early Universe 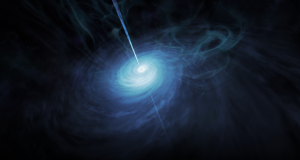 Maunakea, Hawaii – Astronomers have discovered the brightest gravitationally lensed object ever seen at a time when the universe was less than one billion years old.

With the help of multiple, world-class telescopes in Hawaii – Gemini Observatory, James Clerk Maxwell Telescope (JCMT), United Kingdom Infra-Red Telescope  (UKIRT), and W. M. Keck Observatory on Maunakea, Hawaii Island, as well as the Panoramic Survey Telescope and Rapid Response System (Pan-STARRS1) operated by the University of Hawaii Institute for Astronomy on Haleakala, Maui – the researchers discovered that the brilliant beacon is a quasar, the core of a galaxy with a black hole ravenously eating material surrounding it.

The results are published in today’s issue of The Astrophysical Journal Letters and were announced this afternoon during a press conference at the 233rd Meeting of the American Astronomical Society in Seattle.

Though the quasar is very far away – 12.8 billion light-years – astronomers can detect it because a galaxy closer to Earth acts as a lens and makes the quasar look extra bright. The gravitational field of the closer galaxy warps space itself, bending and amplifying the distant quasar’s light. This effect is called gravitational lensing.

Though researchers have searched for these very remote quasars for over 20 years, a rare and fortuitous celestial alignment made this one visible to them.

“We don’t expect to find many quasars brighter than that in the whole observable universe,” said lead investigator Xiaohui Fan, Regents’ Professor of Astronomy at the University of Arizona’s Steward Observatory.

The super-bright quasar, cataloged as J043947.08+163415.7, could hold the record of being the brightest lensed quasar in the early universe for some time, making it a unique object for follow-up studies.

Shining at an apparent brightness equivalent to 600 trillion suns, the quasar is fueled by a supermassive black hole at the heart of a young galaxy in the process of forming. An immense amount of energy is emitted as the black hole consumes material around it. The detection provides a rare opportunity to study a zoomed-in image of how such black holes accompanied star formation in the very early universe and influenced the assembly of galaxies.

The quasar existed at a transitional period in the universe’s evolution, called reionization, where light from young galaxies and quasars reheated the obscuring hydrogen that cooled off not long after the Big Bang.

The quasar would have gone undetected if not for the power of gravitational lensing, which boosted its brightness by a factor of 50.

However, because very distant quasars are identified by their red color (due to absorption by diffuse gas in intergalactic space), sometimes their light is “contaminated,” and looks bluer because of the starlight of an intervening galaxy. As a result, they may be overlooked in quasar searches because their color is diluted to resemble that of a normal galaxy. Fan proposes that many other remote quasars have been missed due to this light contamination.

His team got lucky with finding J043947.08+163415.7, because the quasar is so bright it drowns out the starlight from the especially faint foreground lensing galaxy. “Without this high level of magnification, it would make it impossible for us to see the galaxy,” said co-author Feige Wang, a physics postdoctoral scholar at the University of California, Santa Barbara. “We can even look for gas around the black hole and what the black hole may be influencing in the galaxy.”

“This detection is a surprising and major discovery; for decades we thought that these lensed quasars in the early universe should be very common, but this is the first of its kind that we have found,” said Fabio Pacucci, a postdoctoral associate at Yale University who observed J043947.08+163415.7 with Fan at Keck Observatory. “It gives us a clue on how to search for ‘phantom quasars’ – sources that are out there, but cannot be really detected yet.”

This animation shows an artist’s impression of J043947.08+163415.7, a very distant quasar powered by a supermassive black hole. This object is by far the brightest object yet discovered in the early universe. CREDIT: ESA/HUBBLE, NASA, M. KORNMESSER

Pacucci is the lead author of a follow-up paper with Harvard University’s Astronomy Department Chair, Abraham (Avi) Loeb, on the theoretical implications of Fan’s discovery, which is published in the same issue of The Astrophysical Journal Letters as Fan’s paper.

“Our theoretical study predicts that we might be missing a substantial fraction of the population of these ‘phantom quasars.’ If they are indeed numerous, it would revolutionize our idea of what happened right after the Big Bang, and even change our view of how these cosmic monsters grew up in mass,” said Pacucci.

“The puzzling growth of extremely bright quasars within less than a billion years after the Big Bang might be partly a mirage. After removing the magnification by gravitational lensing, the inferred black holes would be less massive and could originate more naturally in the infant universe,” added Loeb.

Fan’s team selected J043947.08+163415.7 as a very distant quasar candidate based on its color by combining photometric data from the UKIRT Hemisphere Survey in the near-infrared, Pan-STARRS1 survey at optical wavelengths, and NASA’s Wide-field Infrared Survey Explorer archive in the mid-infrared.

Follow-up spectroscopic observations at the University of Arizona’s Multi-Mirror Telescope confirmed that the candidate was in fact a high-redshift, ultra-distant quasar.

“I have been observing at Keck since I was a graduate student more than 20 years ago,” said Fan. “The combination of Keck’s large collecting area, powerful instruments, and unparalleled observing conditions on Maunakea allows us to study objects at literally the edge of the observable universe and constantly expand our cosmic horizon.”

Another Maunakea Observatory, Gemini North, collected an infrared spectrum, which determined the distance of the quasar and the mass of its powerful black hole.

All the data combined revealed the signature of a very faint foreground galaxy directly between the quasar and Earth that is magnifying the quasar image.

However, the foreground lensing galaxy and the quasar are so close in the sky that it is impossible to separate them with images taken from the ground due to blurring of Earth’s atmosphere. It took the exquisitely sharp images by NASA’s Hubble Space Telescope to finally reveal that the quasar image is split into three components by a faint lensing galaxy.

“It’s a hard system to photograph because it turns out to be so compact, which requires the sharpest view from Hubble,” Fan said. 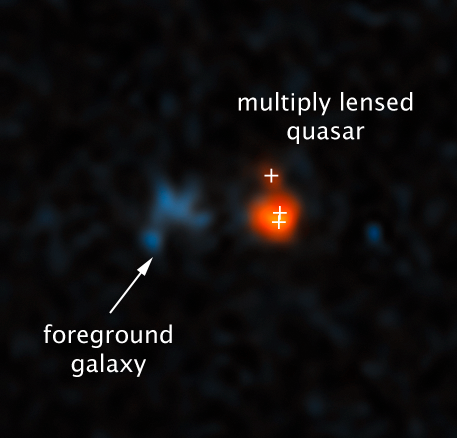 This is a Hubble Space Telescope image of a very distant quasar (at right) that has been brightened and split into three images by the effects of the gravitational field of a foreground galaxy (left). The crosses mark the centers of each quasar image. The quasar would have gone undetected if not for the power of gravitational lensing, which boosted its brightness by a factor of 50. The gravitational field of the foreground galaxy (seen at left) warps space like a funhouse mirror, amplifying the quasar’s light. Shining with the brilliance of 500 trillion suns, the quasar is fueled by a supermassive black hole at the heart of a young galaxy in the process of forming. The image shows the quasar as it looked 12.8 billion years ago – only about 1 billion years after the big bang. The quasar appears red because its blue light has been absorbed by diffuse gas in intergalactic space. By comparison, the foreground galaxy has bluer starlight light. The quasar, cataloged as J043947.08+163415.7, could hold the record of being the brightest in the early universe for some time, making it a unique object for follow-up studies. CREDIT: NASA, ESA, X. FAN (UNIVERSITY OF ARIZONA)

Besides being bright in visible and infrared wavelengths, the lensed quasar is also bright in submillimeter wavelengths, where it was observed with the JCMT. This is due to hot dust heated by intense star formation in the galaxy hosting the lensed quasar. The formation rate is estimated to be up to 10,000 stars per year (by comparison, our Milky Way galaxy makes one star per year).

“Clearly, this black hole is not only accreting gas, but has a lot of star formation around it,” said co-author Jinyi Yang, a postdoctoral fellow at the University of Arizona. “However, because of the boosting effect of gravitational lensing, the actual rate of star formation could be much lower than the observed brightness suggests,” she added.

This animation depicts how the mass of a galaxy is bending the light of a much more distant quasar through gravitational lensing, making the quasar appear three times larger and 50 times brighter in the night sky. CREDIT: ESA/HUBBLE, L. CALCADA

The quasar is ripe for future scrutiny. Fan’s team is analyzing a detailed 20-hour spectrum from the European Southern Observatory’s Very Large Telescope, which would show gas absorption features to identify chemical composition and temperatures of intergalactic gas in the early universe.

Astronomers also will use the Atacama Large Millimeter/submillimeter Array, and eventually NASA’s James Webb Space Telescope, to look within 150 light-years of the black hole to directly detect the influence of the black hole’s gravity on gas motion and star formation in its vicinity.