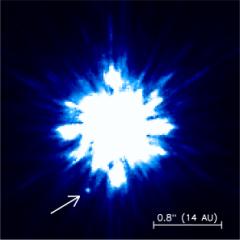 w.m. keck observatory
Keck adaptive optics image of 15 Sge and its companion, also obtained in the near-infrared.The arrow points to the companion, seen as a close point source. Orientation and size are the same as the above image.

MAUNA KEA, Hawaii (January 1st, 2002) Astronomers using adaptive optics on the Gemini North and Keck telescopes have taken an image of a brown dwarf orbiting a nearby star similar to the Sun. The faint companion is separated from its parent star by less than the distance between the Sun and the planet Uranus and is the smallest separation brown dwarf companion seen with direct imaging.
The research team estimates the mass of the brown dwarf at 55 to 78 times the mass of planet Jupiter. The discovery raises puzzling questions about how the brown dwarf formed, and it adds to the surprising diversity of extrasolar planetary systems being found with cutting-edge observational techniques.

“This discovery implies that brown dwarf companions to average, Sun-like stars exist at a separation comparable to the distance between the Sun and the outer planets in our Solar System,” said Michael Liu, the Beatrice Parrent fellow at the University of Hawaii’s Institute for Astronomy. Liu is lead author of a paper presented today at a press conference in Washington, DC, at the 199th meeting of the American Astronomical Society.

Found with adaptive optics technology at the Gemini North and Keck Telescopes on Mauna Kea, Hawaii, the brown dwarf is located in the constellation Sagitta (The Arrow) around a star commonly known as 15 Sge. The star, a G-star formally identified as HR 7672, is one to three billion years old, making it slightly younger than the Sun. It is located approximately 58 light-years from Earth.

“This companion is probably too massive to have formed the way we believe that planets do, namely from a circumstellar disk of gas and dust when the star was young,” Liu added. “This finding suggests that a diversity of processes act to populate the outer regions of other solar systems. The parent star is very similar to our Sun, yet it has a brown dwarf companion whose mass is dozens of times the combined mass of all the planets in our solar system.”

Co-authors on the paper presented today are Debra Fischer, James Graham, James Lloyd and Geoff Marcy of the University of California at Berkeley, and Paul Butler of the Carnegie Institution’s Department of Terrestrial Magnetism in Washington, DC.

The brown dwarf lies at a separation of 14 Astronomical Units (AU), 14 times the distance between Earth and the Sun (1 AU = 150 million kilometers or 93 million miles). This makes it the closest substellar object yet seen by direct imaging around a main sequence (stable, hydrogen-burning) star. For comparison, Saturn orbits the Sun at 10 AU, with Uranus the next planet outward at 19 AU.

Astronomers believe that brown dwarfs are intermediate objects between planets and stars. Often described as ‘failed stars’, they are more massive than Jupiter, the largest planet in our Solar System. However, they fall short of the minimum mass need to sustain nuclear fusion, estimated at 8 percent of the Sun’s mass. After a modest initial outburst of higher temperatures at birth, brown dwarfs cool off and steadily grow fainter.

While many planets have been found around other stars by radial velocity studies (which search for the very weak wobbling of stars due to an unseen planet), the same studies find almost no brown dwarfs, a phenomenon known as the “brown dwarf desert. However, such work only probes the inner four AU around other stars. Very little is known about region outside of four AU, the domain of giant planets in our own solar system.

Hints of an interesting object around 15 Sge first arose in data gathered ten years ago from Lick Observatory on Mount Hamilton, CA. Marcy, Butler, and Fischer obtained high-precision radial velocity measurements of this star as part of their effort to find planets. While they did not find any planets, they did notice clues of a more massive, distant companion.

In the summer of 2001, Liu took high-resolution pictures of 15 Sge using the University of Hawaii’s QUIRC camera and Hoku’pa’a adaptive optics (AO) system on the 8.1-meter Gemini North telescope. Second and third epoch imaging were obtained using the Keck AO system in August and December 2001.

Ground-based astronomical images normally are blurred due to the turbulence of the Earth’s atmosphere.AO is an exciting technology that compensates for this effect in real time, correcting the blurring and making some images sharper than even those produced by the Hubble Space Telescope.

Liu noticed a very faint object next to 15 Sge, akin to distinguishing a firefly next to a bright searchlight.However, the object could have been a distant star in the background, merely appearing to be close to 15 Sge when projected on the sky. Over the course of six months, Liu and his collaborators monitored the star with Keck AO and NIRSPEC on the 10-meter Keck II telescope and found that the faint object moved on the sky along with the primary star, proving the two objects were physically associated. A spectrum of the companion indicated a very cool temperature, characteristic of brown dwarfs.

“Only by using adaptive optics to produce very sharp images could we have found this companion,” Liu explains. “It is too faint and too close to its parent star to be seen otherwise.”

Liu and his collaborators are continuing to search for such objects. “Now that we know brown dwarfs exist in the region of giant planet formation, we would like to understand how often these oddball pairings occur in the Universe, and what that can tell us about the alternate and divergent ways in which solar systems form around Sun-like stars,” he says

Full resolution images of the 15 Sge system and a conceptualization from artist Jon Lomberg are available on the web at: