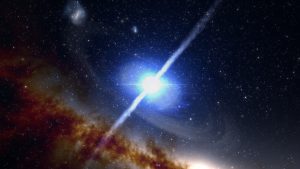 artist's impression of a merger of two neutron stars, which produces the remarkably brief (1 to 2 second) yet intensely powerful event known as a short gamma-ray burst.
Credit: NOIRLab/NSF/AURA/J. da Silva/Spaceengine

A number of mysterious gamma-ray bursts appear as lonely flashes of intense energy far from any obvious galactic home, raising questions about their true origins and distances. Using data from some of the most powerful telescopes on Earth and in space, including W. M. Keck Observatory and Gemini North on Maunakea, Hawaiʻi, astronomers may have finally found their true origins — a population of distant galaxies, some nearly 10 billion light-years away.

Maunakea, Hawaiʻi – An international team of astronomers has found that certain short gamma-ray bursts (GRBs) did not originate as castaways in the vastness of intergalactic space as they initially appeared. A deeper multi-observatory study instead found that these seemingly isolated GRBs actually occurred in remarkably distant – and therefore faint – galaxies up to 10 billion light-years away.

This discovery suggests that short GRBs, which form during the collisions of neutron stars, may have been more common in the past than expected. Since neutron-star mergers forge heavy elements, including gold and platinum, the universe may have been seeded with precious metals earlier than expected as well.

The study has been accepted for publication in the Monthly Notices of the Royal Astronomical Society and is available in preprint format on arXiv.org.

“Many short GRBs are found in bright galaxies relatively close to us, but some of them appear to have no corresponding galactic home,” said Brendan O’Connor, lead author of the study and an astronomer at both the University of Maryland and the George Washington University. “By pinpointing where the short GRBs originate, we were able to comb through troves of data from multiple observatories to find the faint glow of galaxies that were simply too distant to be recognized before.”

This cosmic sleuthing required the combined power of some of the most powerful telescopes on Earth and in space, including two Maunakea Observatories in Hawaiʻi – W. M. Keck Observatory and Gemini North telescope – as well as the Gemini South telescope in Chile. The two Gemini telescopes comprise the International Gemini Observatory, operated by NSF’s NOIRLab. Other observatories involved in this research include the NASA/ESA Hubble Space Telescope, Lowell Discovery Telescope in Arizona, Gran Telescopio Canarias in Spain, and the European Southern Observatory’s Very Large Telescope in Chile. 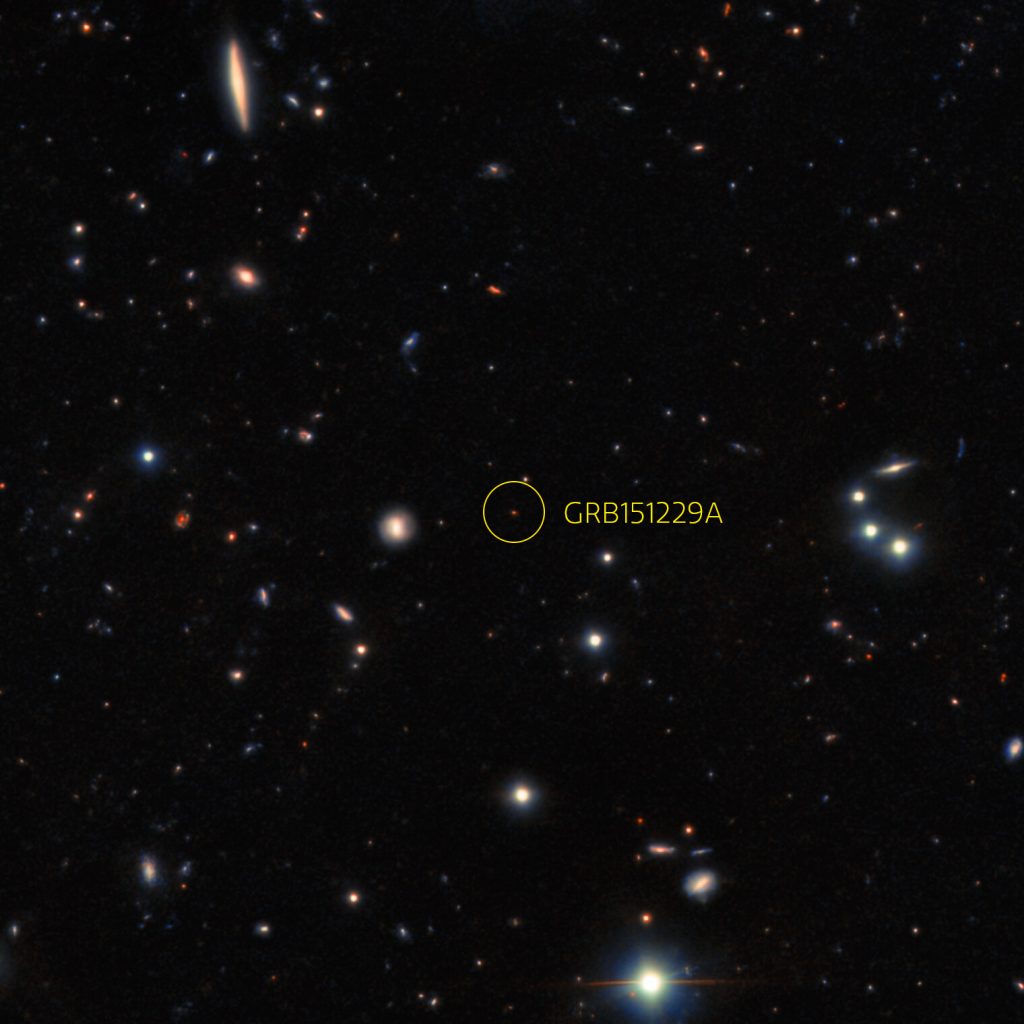 This image captured by the Gemini North telescope on Maunakea in Hawaiʻi reveals the previously unrecognized galactic home of the gamma-ray burst identified as GRB 151229A. Astronomers calculate that this burst, which lies in the direction of the constellation Capricornus, occurred approximately 9 billion years ago. Credit: International Gemini Observatory/NOIRLab/NSF/AURA

The researchers began their quest by reviewing data on 120 GRBs captured by two instruments aboard NASA’s Neil Gehrels Swift Observatory: Swift’s Burst Alert Telescope, which signaled a burst had been detected; and Swift’s X-ray Telescope, which identified the general location of the GRB’s X-ray afterglow. Additional afterglow studies made with the Lowell Observatory more accurately pinpointed the location of the GRBs.

The afterglow studies found that 43 of the short GRBs were not associated with any known galaxy and appeared in the comparatively empty space between galaxies.

“These hostless GRBs presented an intriguing mystery and astronomers had proposed two explanations for their seemingly isolated existence,” said O’Connor.

One hypothesis was that the progenitor neutron stars formed as a binary pair inside a distant galaxy, drifted together into intergalactic space, and eventually merged billions of years later. The other hypothesis was that the neutron stars merged many billions of light-years away in their home galaxies, which now appear extremely faint due to their vast distance from Earth.

“We felt this second scenario was the most plausible to explain a large fraction of hostless events,” said O’Connor. “We then used the most powerful telescopes on Earth to collect deep images of the GRB locations and uncovered otherwise invisible galaxies 8 to 10 billion light-years away from Earth.”

This result could help astronomers better understand the chemical evolution of the universe. Merging neutron stars trigger a cascading series of nuclear reactions that are necessary to produce heavy metals, like gold, platinum, and thorium. Pushing back the cosmic timescale on neutron-star mergers means that the young universe was far richer in heavy elements than previously known.

“This pushes the timescale back on when the universe received the ‘Midas touch’ and became seeded with the heaviest elements on the periodic table,” said O’Connor.