A native of Italy, Tommaso Treu, now a UC Santa Barbara astrophysicist, earned degrees at University of Pisa and the Scuola Normale Superiore and was a graduate student at the Space Telescope Science Institute. His postdoctoral studies at the California Institute of Technology and as a Hubble fellow at UCLA exposed him to two of the greatest telescopes in the world—Keck and Hubble—and he now uses both facilities to add bits and pieces from different cosmic eras to the galactic family album of the Universe. 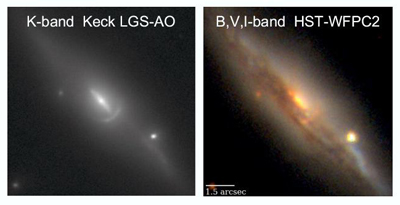 These images show an edge-on spiral system that lenses a background object located several billion light years from Earth. The lensed background object is visible as an arclet close to the center of the foreground spiral in the optical Hubble Space Telescope discovery image (right) and even more apparent in the Keck near-IR image, where the effects of dust are minimized (left). The combined information at multiple wavelengths allows one to correct for the dust, infer the stellar mass of the early galaxy and determine where it fits within the family photo album of the Universe. Credit: A. Dutton, P. Marshall, M.W. Auger, T. Treu.

“When I look up in the sky and see these incredible objects, like galaxies and star clusters, I want to know how they were assembled and why they came in the shape and color they’re in and not any others,” says Treu.

To answer these questions, Treu tracks how stars, gas and dust have interacted with unseen black holes and dark matter. He then determines how these relations have shaped the Universe.

His success recently earned him the 2010 Newton Lacy Pierce Prize from the American Astronomical Society, the major professional organization in North America for astronomers. The prize recognizes outstanding achievement in observational astronomical research based on measurements of radiation from an astronomical object.

Treu’s research focuses particularly on the supermassive black holes that lie at the heart of elliptical and spiral galaxies. The black holes are small relative to the mass of the entire galaxy, but, due to their gravity, they can accrete or gather material and convert it to energy, enough energy to outshine the entire galaxy.

This process is essential to the development of a galaxy and how galaxies evolve to shape the Universe, Treu says. That’s because the energy output acts like a thermostat and keeps gas in the galaxy at a certain temperature to regulate star formation. If the gas remains cool, it can collapse and stars can develop. But if the black hole puts out exceedingly large amounts of energy, it may keep the gas warmer and keep the stars from forming, Treu says.

He adds that measuring the amount of energy a black hole, specifically those in the earliest galaxies, releases is important because the energy output may determine how the Universe evolved.

Of course, in the earliest galaxies, “we see a blob and have to interpret what is going on billions of light years away,” Treu says. With Keck Observatory’s Next Generation Adaptive Optics system, Treu will be able to sharpen his view of the blobs at shorter wavelengths. The improved resolution and ability to observe what is going on in the early Universe is essential to understanding cosmic history, he adds.

Treu will discuss his research honored by the Newton Lacy Pierce Prize at the 2011 winter AAS meeting to be held next January in Seattle, Washington.