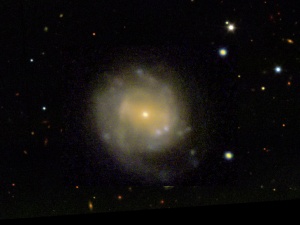 Maunakea, Hawaii – A Northwestern University-led international team of astronomers is getting closer to understanding the mysterious bright object that burst in the northern sky this summer, dubbed AT2018cow or ‘The Cow.’

With the help of W. M. Keck Observatory on Maunakea, Hawaii and the University of Hawaii Institute for Astronomy’s ATLAS twin telescopes, the multi-institutional team now has evidence that they likely captured the exact moment a star collapsed to form a compact object, such as a black hole or neutron star.

The stellar debris, approaching and swirling around the object’s event horizon, caused the remarkably bright glow.

The research, which will be appearing in The Astrophysical Journal, was announced today during a press conference at the 233rd Meeting of the American Astronomical Society in Seattle.

This rare event will help astronomers better understand the physics at play within the first moments of the creation of a black hole or neutron star.

“Based on its X-ray and UV emission, ‘The Cow’ may appear to have been caused by a black hole devouring a white dwarf. But further observations of other wavelengths across the spectrum led to our interpretation that ‘The Cow’ is actually the formation of an accreting black hole or neutron star,” said lead author Raffaella Margutti, assistant professor of physics and astronomy at Northwestern University and faculty member of Northwestern’s CIERA (Center for Interdisciplinary Exploration and Research for Astrophysics). “We know from theory that black holes and neutron stars form when a star dies, but we’ve never seen them right after they are born. Never.” 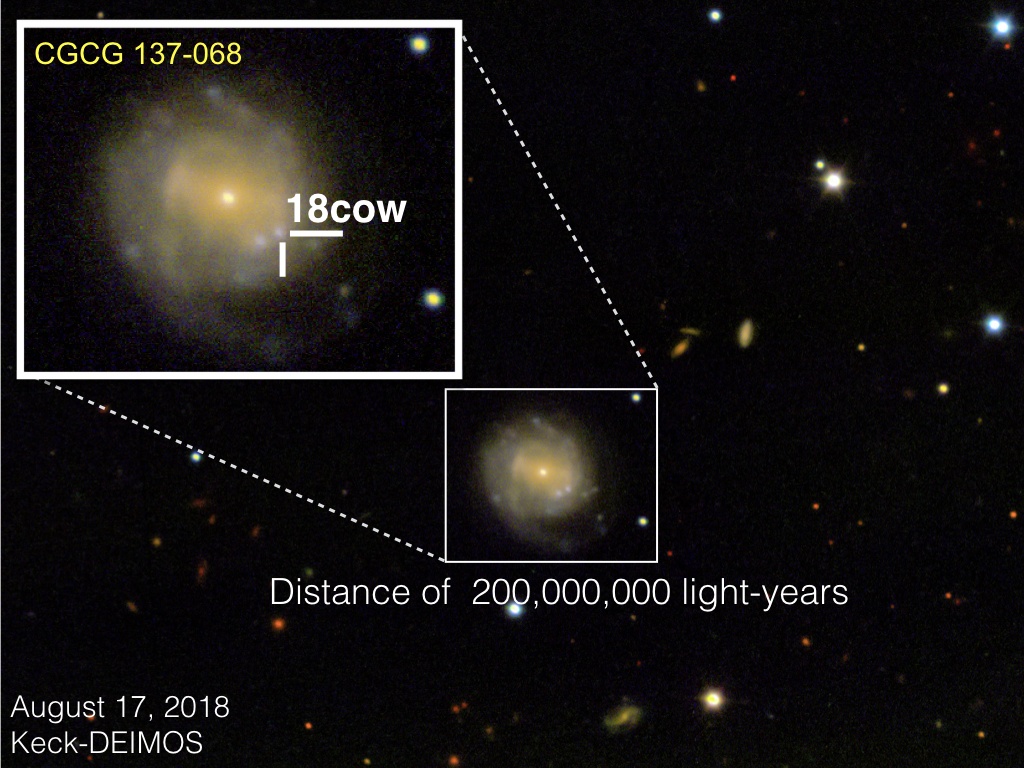 The Cow was first spotted on June 16 after the ATLAS telescopes on Haleakala and Maunaloa captured a spectacularly bright anomaly 200 million light years away in the Hercules constellation. The object quickly flared up, then vanished almost as quickly.

The event captured immediate international interest and left astronomers scratching their heads. “We thought it must be a supernova,” Margutti said. “But what we observed challenged our current notions of stellar death.”

For one, the anomaly was unnaturally bright — 10 to 100 times brighter than a typical supernova. It also flared up and disappeared much faster than other known star explosions, with particles flying at 30,000 kilometers per second (or 10 percent of the speed of light).

Within just 16 days, the object had already emitted most of its power. In a universe where some phenomena last for millions and billions of years, two weeks amounts to the blink of an eye.

“We knew right away that this source went from inactive to peak luminosity within just a few days,” said co-author Ryan Chornock, assistant physics and astronomy professor at Ohio University. “That was enough to get everybody excited because it was so unusual and, by astronomical standards, it was very close by.”

Using Northwestern’s access to Keck Observatory’s twin telescopes, Margutti’s team took a closer look at the object’s makeup with the Low Resolution Imaging Spectrometer (LRIS) on the Keck I telescope as well as the DEep Imaging and Multi-Object Spectrograph (DEIMOS) on Keck II.

“Keck was instrumental in determining the chemical composition and geometry of AT2018cow,” said co-author Nathan Roth, a JSI postdoctoral fellow at the University of Maryland. “Keck’s unique niche is its capability to monitor the late-time behavior of The Cow. This can be difficult; as more time passes after the event, the fainter it becomes. But with Keck’s late time spectroscopy, we were able to pierce through the ‘interiors’ of the explosion. This revealed AT2018cow’s red-shifted spectral features very nicely.”

“The Cow is a great example of a type of observation that’s becoming critical in astronomy: rapid response to transient events,” says Keck Observatory Chief Scientist John O’Meara. “Looking forward, we are implementing new observational policies and telescope instrumentation that allow us to be as quick on the sky and to the science as we can.”

The team also obtained optical images from the MMT Observatory in Arizona, as well as the Southern Astrophysical Research SOAR Telescope in Chile.

When Margutti and her team examined The Cow’s chemical composition, they found clear evidence of hydrogen and helium, which excluded models of compact objects merging — like those that produce gravitational waves.

“It took us a while for us to realize what we were looking at, I would say months,” said co-author Brian Metzger, associate physics professor at Columbia University. “We tried several possibilities and were forced to go back to the drawing board multiple times. We were finally able to interpret the results, thanks to the hard work of our incredibly dedicated team.”

This enabled them to continue studying the anomaly long after its initial visible brightness faded.

Margutti attributes The Cow’s relative nakedness to potentially unraveling this intergalactic mystery. Although stars might collapse into black holes all the time, the large amount of material around newly born black holes blocks astronomers’ vision.

Fortunately, about 10 times less ejecta swirled around The Cow compared to a typical stellar explosion. The lack of material allowed astronomers to peer straight through to the object’s “central engine,” which revealed itself as a probable black hole or neutron star.

“A ‘lightbulb’ was sitting deep inside the ejecta of the explosion,” Margutti said. “It would have been hard to see this in a normal stellar explosion. But The Cow had very little ejecta mass, which allowed us to view the central engine’s radiation directly.”

Margutti’s team also benefited from the star’s relative closeness to Earth. Even though it was nestled in the distant dwarf galaxy called CGCG 137-068, astronomers consider that to be “right around the corner.”

“Two hundred million light-years is close for us,” Margutti said. “This is the closest transient object of this kind that we have ever found.”

“Being given the opportunity to contribute to something as cutting edge and international as understanding AT2018cow as an undergrad is a surreal experience,” said co-author Daniel Brethauer, a first-year undergraduate student at Northwestern. “To have helped the world’s experts figure out what AT2018cow is even in the smallest way was beyond my wildest expectations at the beginning of the summer and something that I will remember for the rest of my life.”

Department of Physics and Astronomy

The Low Resolution Imaging Spectrometer (LRIS) is a very versatile visible-wavelength imaging and spectroscopy instrument commissioned in 1993 and operating at the Cassegrain focus of the Keck I telescope. Since it has been commissioned, it has seen two major upgrades to further enhance its capabilities: addition of a second blue arm optimized for shorter wavelengths of light and the installation of detectors that are much more sensitive at the longest (red) wavelengths. Each arm is optimized for the wavelengths it covers. This large range of wavelength coverage, combined with the instrument’s high sensitivity, allows the study of everything from comets (which have interesting features in the ultraviolet part of the spectrum), to the blue light from star formation, to the red light of very distant objects. LRIS also records the spectra of up to 50 objects simultaneously, especially useful for studies of clusters of galaxies in the most distant reaches, and earliest times, of the universe. LRIS was used in observing distant supernovae by astronomers who received the Nobel Prize in Physics in 2011 for research determining that the universe was speeding up in its expansion.