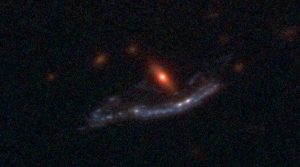 With this innovative technique, the researchers have created the first ever spatial maps of the enormous, translucent gas clouds that birth galaxies, shedding new light on galactic evolution and star formation in the young universe.

The study is published in today’s online issue of the journal Nature.

Known as Damped Lyman-α systems (or DLAs), these reservoirs of primitive gas filled most of the early universe after the Big Bang. Over cosmic time, gravity pulled the gas into clouds that slowly condensed to create some of the earliest galaxies and stars. DLAs are still observable today but detecting them using traditional methods is extremely challenging.

“DLAs are a key to understanding how galaxies form in the universe, but they are typically difficult to observe since the clouds are too diffuse and don’t emit any light themselves,” said Rongmon Bordoloi, assistant professor of physics at NC State and lead author of the study.

Since gas becomes more visible when it is in front of something bright, astrophysicists have been using quasars – distant, supermassive black holes that unleash powerful jet streams of energy – as a “backlight” to detect DLA clouds. But the light from quasar jets only illuminate pencil-thin beams through the massive gas clouds. While this method allows astronomers to locate DLAs, it doesn’t provide the macro view needed to measure their total size and mass.

“This technique has been used for decades, and has taught us a lot,” said John O’Meara, chief scientist at W. M. Keck Observatory and co-author of the study. “But it’s like being blind and touching the tail of an elephant—you have no idea what the rest looks like.”

Bordoloi and O’Meara’s team came up with a solution to this problem by combining the latest advances in integral field spectroscopy with a phenomenon that acts as nature’s magnifying glass. Using Keck Observatory’s Keck Cosmic Web Imager (KCWI), an extremely sensitive integral field spectrograph, the team located and measured two DLA systems that were backlit by SGASJ152745.1+065219—a very distant, gravitationally lensed galaxy.

“Gravitationally lensed galaxies refer to galaxies that appear stretched and brightened. This is because there is a gravitationally massive structure in front of the galaxy that bends the light coming from it as it travels toward us,” Bordoloi explained. “So we end up looking at an extended version of the object. It’s like using a cosmic telescope that increases magnification and gives us better visualization.”

An artist’s rendering showing how a cluster of galaxies (lensing cluster) acts as a gravitational lens that magnifies and extends the light from SGASJ152745.1+065219 (galaxy). This results in a projected image (marked in the rectangle panel) that is brighter and easier to detect with a telescope. This allowed astronomers to use Keck Observatory’s KCWI instrument to zoom in on the projected image and map out the gas of two giant DLAs that are two-thirds the size of the Milky Way. Credit: W. M. Keck Observatory/Adam Makarenko

This technique has been used before for heavy elements like carbon and magnesium, but not for neutral hydrogen nor for gas thought to be in the right condition to create galaxies.

“This is the culmination of my work investigating star forming gas in the universe,” O’Meara said. “I’ve been playing the quasar game for a quarter century, but now I can do it right by looking at how DLAs vary within a single structure, not statistically. It’s a new age for studies like this.”

The findings show both DLAs are colossal; they’re nearly as large as the Milky Way, with diameters exceeding 17.4 kiloparsecs. It would take light about 56,723 years to complete a one-way journey across these gaseous giants.

“The most amazing thing about the DLAs we observed is that they aren’t unique—they seem to have similarities in structure, host galaxies were detected in both, and their masses indicate that they contain enough fuel for the next generation of star formation,” Bordoloi said. “With this new technology at our disposal, we are going to be able to dig deeper into how stars formed in the early universe.”

“I’ve waited most of my career for this combination: a telescope and instrument powerful enough, and nature giving us a bit of lucky alignments to study not one but two DLAs in a rich new way,” O’Meara said. “It’s great to see the science come to fruition.”

The Keck Cosmic Web Imager (KCWI) is designed to provide visible band, integral field spectroscopy with moderate to high spectral resolution formats and excellent sky-subtraction. The astronomical seeing and large aperture of the telescope will enable studies of the connection between galaxies and the gas in their dark matter halos, stellar relics, star clusters, and lensed galaxies. Support for this project was provided by The Heising-Simons Foundation, Mt. Cuba Astronomical Foundation, and other Friends of Keck Observatory.