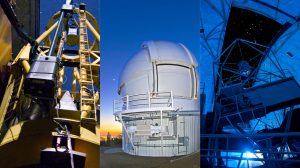 Maunakea, Hawaiʻi – Current and former astronomers from the University of Hawaiʻi Institute for Astronomy (IfA) have wrapped up a massive collaborative study that set out to determine if most solar systems in the universe are similar to our own. With the help of W. M. Keck Observatory on Maunakea in Hawaiʻi, the 30-year planetary census sought to find where giant planets tend to reside relative to their host stars.

In our solar system, the giant planets—Jupiter and Saturn—are found in the chilly outer regions, while smaller planets tend to orbit closer to the Sun. Earth lives in an intermediate tropical zone well-suited to life, at a distance of 1AU (astronomical unit) from the Sun. Jupiter is about 5 AU from the Sun, and Saturn is at 9 AU. An AU, the distance from the Earth to our Sun, is about 93 million miles.

“Dynamically speaking, Jupiter and Saturn are the VIPs—Very Important Planets—of the solar system,” said IfA Parrent Postdoctoral Fellow Lauren Weiss. “They are thought to have shaped the assembly of the terrestrial planets, potentially stunting the growth of Mars and slingshotting water-bearing comets toward Earth.”

Researchers also found that giant planets tend to reside about 1 to 10 AU from their host stars, a mostly icy region located beyond these stars’ temperate zones.

Where Giant Planets Live: This Illustration shows where giant planets reside with respect to their host stars. Recent findings from the California Legacy Survey, in which hundreds of stars and planets were surveyed, reveal that giant planets around other stars tend to orbit between 1 and 10 astronomical units (AU) from their stars. An AU is the distance between Earth and the sun. The results are depicted in this chart, such that the taller buildings show where most of the giant planets tend to “live” relative to their stars, i.e., in the zone between 1 and 10 AU from their stars. Giant planets residing very close to their stars, colloquially known as “hot Jupiters,” receive an abundance of light and heat from their nearby host stars, and are thus adorned in sunglasses. More distant giants receive much less light from their host stars and therefore are colder and depicted with hats and earmuffs. Image credit: California Legacy Survey/T. Pyle (Caltech/IPAC)

The new research is reported in two journal articles accepted for publication in The Astrophysical Journal Supplement. Lee Rosenthal, a graduate student at Caltech who works with Howard, is lead author of one study, and Fulton is lead author of the second paper.

Researchers observed 719 sun-like stars for more than three decades, finding 177 planets, including 14 that were newly discovered. The planets have masses between one-hundredth and 20 times the mass of Jupiter.

The project, called the California Legacy Survey, originated in the Golden State in the 1990s; half of the data was obtained using Keck Observatory’s High-Resolution Echelle Spectrometer (HIRES). It is the longest-duration exoplanet survey to date.

Rosenthal explains that the survey was designed to be unbiased by carefully selecting random stars, “as if you could put your hand in a grab bag of stars and pull a random planet out.” Working on this project as part of his PhD thesis, Rosenthal says it was “humbling to work on a 30-year project where some of the data are older than I am.”

In our solar system, we also have planets that are a bit smaller than Jupiter and Saturn, Uranus and Neptune, which are located out beyond Saturn. The California Legacy Survey is not sensitive to planets in that size range and at that distance.

“While we can’t detect smaller planets similar to Neptune and Uranus that are very distant from their stars, we can infer that the large gas giants like Jupiter and Saturn are extremely rare in the outermost regions of most exoplanetary systems,” explained Fulton.

“This survey is a great jumping-off point for future instruments that are sensitive to planets the size of Earth,” said Howard, who is leading one such cutting-edge instrument, the Keck Planet Finder, which is expected to be shipped to Keck Observatory in 2022. 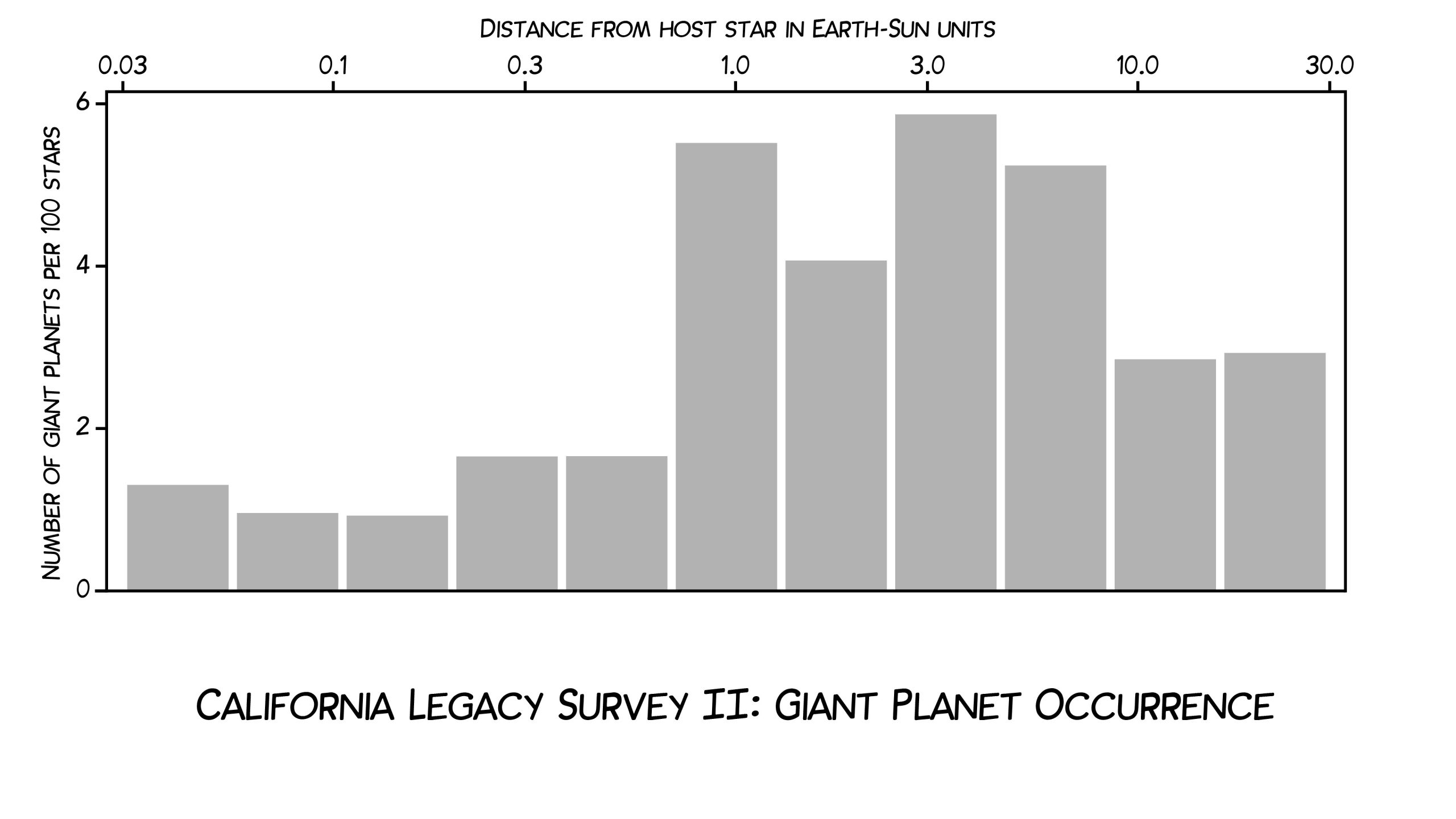 Giant Planet Occurence: This graph of data collected by the California Legacy Survey indicates that most giant planets in the galaxy tend to reside about 1 to 10 astronomical units (AU) from their host stars. An AU is defined as the distance from Earth to our sun, or about 93 million miles. This is similar to what we see in our own solar system: Earth orbits at 1 AU; Jupiter is situated at about 5 AU and Saturn at 9 AU. Image credit: California Legacy Survey/T. Pyle (Caltech/IPAC)

The collaboration included researchers from IfA, Caltech, and the University of California, and primarily used Keck Observatory and the Shane and Automated Planet Finder telescopes at Lick Observatory, near San Jose, California.

The team plans to continue to sift through data for new patterns and clues to help understand the characteristics and formation of other star systems, as well as our own solar system. They are also looking forward to next-generation surveys.

The first paper in the series, led by Rosenthal, is titled, “The California Legacy Survey I. A Catalog of 177 Planets from Precision Radial Velocity Monitoring of 719 Nearby Stars Over Three Decades.” The second paper in the series, led by Fulton, is titled, “California Legacy Survey II. Occurrence of Giant Planets Beyond the Ice Line.”

The W. M. Keck Observatory telescopes are among the most scientifically productive on Earth. The two 10-meter optical/infrared telescopes on the summit of Maunakea on the Island of Hawaiʻi feature a suite of advanced instruments including imagers, multi-object spectrographs, high-resolution spectrographs, integral-field spectrometers, and world-leading laser guide star adaptive optics systems. Some of the data presented herein were obtained at Keck Observatory, which is a private 501(c) 3 non-profit organization operated as a scientific partnership among the California Institute of Technology, the University of California, and the National Aeronautics and Space Administration. The Observatory was made possible by the generous financial support of the W. M. Keck Foundation.The authors wish to recognize and acknowledge the very significant cultural role and reverence that the summit of Maunakea has always had within the Native Hawaiian community. We are most fortunate to have the opportunity to conduct observations from this mountain.