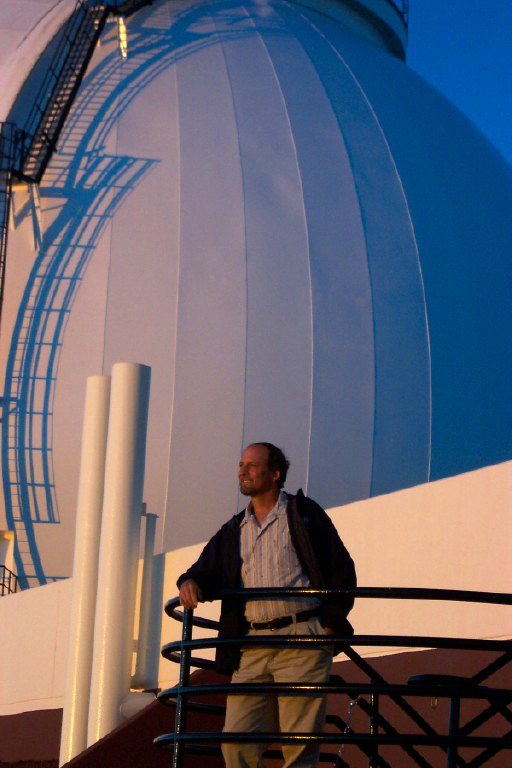 Geoff Marcy, an astronomer at UC Berkeley, began searching for worlds beyond our Solar System in the early nineties. Today he is one of the most prolific planet hunters ever to study stars and their planets. One of the keys to his success is access to the Keck Observatory in Hawaii and the Keck I telescope’s premier instrument, the High Resolution Echelle Spectrograph, or HIRES.

HIRES was built by Steve Vogt at UC Santa Cruz and was not originally designed to hunt for planets. Instead, astronomers first used it to study what Vogt calls, “faint fuzzy blobs at the edge of the Universe,” which today are known as distant, energetic galaxies called quasi-stellar objects.

By 1995, the planet hunting field “broke wide open,” Vogt explains, and he realized that Keck could be a leader in this nascent area of research that was “ready to explode.” As a result, he, with the help of Marcy, Paul Butler and other collaborators, modified HIRES to transform it into one of the best planet detectors to date. HIRES has discovered nearly a third of the 400 exoplanets so far identified using the radial velocity or “wobble” technique.

The technique is based on gravity. As a planet orbits its parent star, its gravitational pull causes the star to move slightly. HIRES records this motion as a shift in the star’s spectra. From the data, planet hunters can calculate the speed of the star as it moves toward or away from them and determine the orbiting planet’s mass. 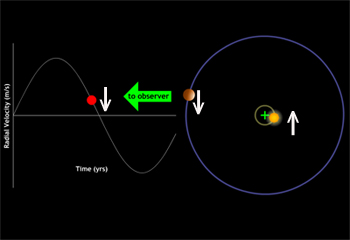 This artist’s illustration shows the orbit of a planet and its gravitational affect on its parent star. The radial velocity curve is shown on the left. Credit: University of Nebraska-Lincoln.

Keck and HIRES are crucial for planet-hunting because astronomers can only determine a planet’s mass using this radial velocity technique, Vogt notes.

In 2009, he, Eugenio Rivera and Greg Laughlin of UC Santa Cruz, along with Butler of the Carnegie Institute of Washington, identified at least six low-mass planets around two nearby, Sun-like stars. Two of the planets had masses only five and 7.5 times greater than Earth. In the same year, Andrew Howard of UC Berkeley, Debra Fischer of Yale, Marcy and their colleagues also used HIRES to discover a planet that had just four times the mass of the Earth—the second smallest exoplanet found to date.

Astronomers call these low-mass planets “super-Earths” and believe that they are important milestones on planet hunters’ quest for their holy grail.

To accelerate the search for Earths, NASA launched the Kepler spacecraft in March 2009. The .95-meter space-based telescope monitors the light from 100,000 stars to determine if any of them dim and then brighten periodically. The change in light may indicate that a planet is repeatedly passing in front of, or transiting, its parent star.

The phenomenon is similar to a solar eclipse where the Moon passes in front of the Sun and, from our viewpoint, blocks a vast majority of our star’s light. But when a planet the size of Earth eclipses, or transits its star, it will only block a small fraction, 1/10,000, of the star’s light.

Marcy explains that Kepler cannot determine with absolute certainty whether the object “taking a bite out” of its parent’s starlight is really a planet. It could be just another star. “This is where Keck plays a crucial role to the Kepler mission,” he says. Keck and HIRES can measure the star’s wobble and calculate the mass of the light-eating object.

This illustration shows a planet transiting its parent star, as seen from Earth. The resulting light curve appears below. Credit: SuperWASP.

If the devourer is indeed a planet, astronomers can then use the planet’s mass, from the radial velocity data, and its volume, from the transit data, to determine the density and help astronomers understand the composition of the new world.

In less than a year, the Keck-Kepler combo has revealed more than five planets comprised of everything from ice to helium and hydrogen gas. The discoveries include a planet, Kepler 7b, which is roughly half the mass of Jupiter but has an ultra-low density similar to Styrofoam. It, unlike Earth, would float, if you could throw it in a bathtub.

Yet even without the space-based telescope, Keck’s planet hunters may soon find the very closest, potentially habitable planets, Laughlin says. HIRES has already uncovered super-Earths, that are just a few times the mass of our Earth, albeit in close, hot orbits, says Fischer, who was finishing graduate school at UCSC when the first exoplanets were discovered in 1995.

Detecting such low-mass planets requires a sensitivity fine enough to measure star’s wobbles or radial velocities of about one meter per second. The tug of Earth-mass worlds on Sun-like stars, however, is ten times smaller and likely causes them to wobble or exhibit a radial velocity of about ten centimeters per second, about the speed of a snail, Marcy explains. 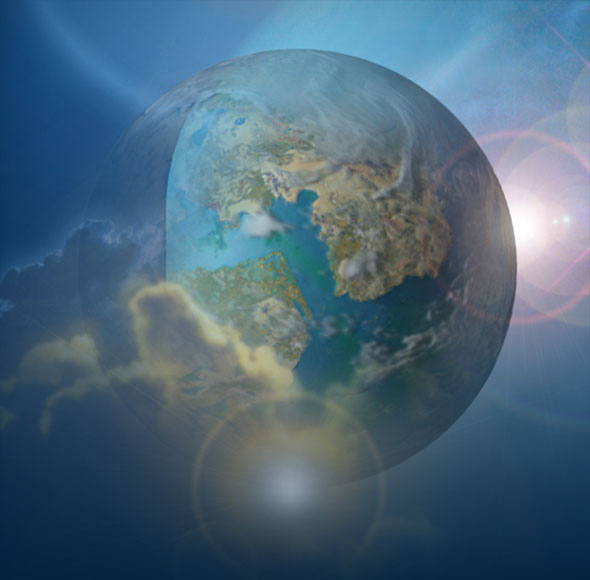 Planet hunters may soon find worlds like this artist’s rendition of an Earth-like planet. Credit: JPL

To observe such sluggish speeds, he and other Keck planet hunters would like to add a little MAGIQ to Keck’s HIRES in the form of a next-generation Multi-function Acquisition, Guiding and Image Quality monitoring system. The new system will keep the instrument locked on its targets with improved sensitivity and accuracy—far beyond its current meter per second precision and potentially within the realm of rocky planets.

A search for such worlds began when the first humans looked to the stars and asked, ‘Are we alone?’ “Now, we are closing in on an answer, Marcy says.