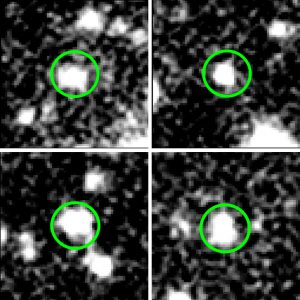 four of the 38 galaxies in the protocluster magaz3ne j095924+022537 that were imaged using keck observatoryʻs mosfire instrument.
Credit: I. McConachie, G. Wilson/UC Riverside

Why Cluster’s Galaxies are Unlike Those in All the Other Known Protoclusters is a Mystery, says UC Riverside-led Team

Maunakea, Hawaiʻi – An international team of astronomers led by researchers at the University of California, Riverside (UCR), has discovered a massive cluster of young galaxies forming in the early universe.

With the help of W. M. Keck Observatory on Maunakea, Hawaiʻi Island, the team found that the newly discovered growing galactic metropolis, named MAGAZ3NE J095924+022537, is a newborn galaxy cluster, or protocluster, consisting of at least 38 member galaxies, and is about 11.8 billion light-years away from Earth.

Galaxy clusters grow over time under gravity and, in the present-day universe, can contain hundreds or even thousands of galaxies, as well as hot gas and dark matter. As time goes by, their galaxies burn through the fuel available and evolve from vigorously star-forming galaxies into red and dead galaxies.

“In the early universe, all protoclusters discovered until now are full of vigorously star-forming galaxies,” said Ian McConachie, a graduate student in the UCR Department of Physics and Astronomy and the lead author of the research paper published in The Astrophysical Journal. “But incredibly, unlike all of the other protoclusters that have been found at this epoch, many galaxies in MAGAZ3NE J0959 appear to have already stopped forming stars.”

“We were surprised to find a galaxy graveyard in such a young cluster,” said co-author Percy Gomez, a staff astronomer at Keck Observatory who worked with and mentored McConachie during his time as a Keck Visiting Scholar. “Now the question is, what did these galaxies look like before? A new search is on.”

Co-author Gillian Wilson, a professor of physics and astronomy at UCR in whose lab McConachie works, said J0959 was discovered from the “Massive Ancient Galaxies At Z > 3 NEar-infrared,” or MAGAZ3NE, survey, designed to discover and study ultramassive galaxies and their neighbors.

“We are seeing this protocluster as it appeared when the universe was less than 2 billion years old,” she said. “It is as if you took a cluster like Coma, the nearest rich cluster of galaxies to Earth, and plopped it into the early universe.”

In the early universe, all previously discovered distant protoclusters like, for example, “The Spiderweb” (left: artist’s impression) are full of vigorously star-forming galaxies. In contrast, the newly-discovered protocluster “MAGAZ3NE J095924+022537” contains a high fraction of red and dead galaxies like the nearby “Coma” cluster (right). The discovery of an ancient cluster containing galaxies which resemble those found in modern clusters was a huge surprise. Credits: Spiderweb: M. Kornmesser/ESO; Coma: Russ Carroll, Robert Gendler, & Bob Franke/Dan Zowada Memorial Observatory.

Co-author Benjamin Forrest, a former postdoctoral researcher in Wilson’s lab who is now based at UC Davis, explained that at the heart of MAGAZ3NE J0959 is an ultramassive galaxy that has already formed a mass of more than 200 billion suns.

“Why this ultramassive galaxy and so many of its neighbors formed most of their stars and then became inactive when the universe was still so young, in contrast to other known protoclusters from the same time, is a big mystery,” he said. “Why its galaxies are so unlike those in all the other known protoclusters, and so similar to those in Coma, is a complete mystery.”

Forrest added that MAGAZ3NE J0959 was discovered from the ground, but the advent of powerful new capabilities, like the recently-launched James Webb Space Telescope, should soon reveal whether there are other protoclusters like MAGAZ3NE J0959 packed with dead galaxies waiting to be found in the early universe.

“Should such protoclusters be found in large numbers, it would mean that the current paradigm of protocluster formation would require a major revision,” Forrest said. “A new scenario of protoclusters existing in a diversity of states in the early universe would have to be adopted. With many member galaxies quenching in the first two billion years, this would almost certainly pose significant challenges for current models of galaxy simulation.”

Closely associated to the question of how ultramassive galaxies form is the question of the environment in which they form, for example, are they always found in overdense environments like protoclusters, or can they also form in isolation? Next, the team plans to study the neighborhood of all other ultramassive galaxies in the MAGAZ3NE survey to answer this question.

The study was supported by grants from the National Science Foundation and NASA.