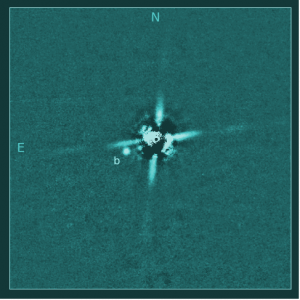 a direct image of the planet 2m0437, which lies about 100 times the earth-sun distance from its parent star. the image was taken by ircs on the subaru telescope on maunakea. the much-brighter host star has been mostly removed, and the four “spikes'' are artifacts produced by the optics of the telescope. credit: subaru telescope

Maunakea, Hawaiʻi – One of the youngest planets ever found around a distant infant star has been discovered by an international team of scientists led by University of Hawaiʻi at Mānoa faculty, students, and alumni.

Thousands of planets have been discovered around other stars, but what sets this one apart is that it is newly-formed and can be directly observed. The planet, named 2M0437b, joins a handful of objects advancing our understanding of how planets form and change with time, helping shed new light on the origin of the solar system and Earth.

The in-depth research has been accepted for publication in the Monthly Notices of the Royal Astronomical Society and is available in preprint format on arXiv.org.

“This serendipitous discovery adds to an elite list of planets that we can directly observe with our telescopes,” explained lead author Eric Gaidos, a professor in the UH Mānoa Department of Earth Sciences. “By analyzing the light from this planet we can say something about its composition, and perhaps where and how it formed in a long-vanished disk of gas and dust around its host star.”

The researchers estimate that the planet is a few times more massive than Jupiter, and that it formed with its star several million years ago, around the time the main Hawaiian Islands first emerged above the ocean. The planet is so young that it is still hot from the energy released during its formation, with a temperature similar to the lava erupting from Kīlauea Volcano.

In 2018, 2M0437b was first seen with the Subaru Telescope on Maunakea by UH Institute for Astronomy (IfA) visiting researcher Teruyuki Hirano. For the past several years, it has been studied carefully utilizing other telescopes on the mauna.

Gaidos and his collaborators used W. M. Keck Observatory on Maunakea to monitor the position of the host star as it moved across the sky. With Keck Observatory’s Near-Infrared Camera, second generation (NIRC2) in combination with the Keck II telescope’s adaptive optics system, the team was able to verify that planet 2M0437b was truly a companion to the star, and not a more distant object. The observations required three years because the star moves slowly across the sky.

“The exquisite data from the Keck Observatory allowed us to confirm that the faint neighbor is moving through space along with its star, and thus is a true companion,” explained Dr. Adam Kraus, a professor in the Department of Astronomy at the University of Texas at Austin and co-author on the paper. “Eventually, we might even be able to measure its orbital motion around the star.”

The planet and its parent star lie in a stellar “nursery” called the Taurus Cloud. 2M0437b is on a much wider orbit than the planets in the solar system; its current separation is about 100 times the Earth-Sun distance, making it easier to observe. However, sophisticated adaptive optics are still needed to compensate for the image distortion caused by Earth’s atmosphere.

“Two of the world’s largest telescopes, adaptive optics technology, and Maunakea’s clear skies were all needed to make this discovery,” said co-author Michael Liu, an astronomer at IfA. “We are all looking forward to more such discoveries, and more detailed studies of such planets with the technologies and telescopes of the future.”

Gathering more in-depth research about the newly-discovered planet may not be too far away. “Observations with space telescopes such as NASA’s Hubble and the soon-to-be-launched James Webb Space Telescope could identify gases in its atmosphere and reveal whether the planet has a moon-forming disk,” Gaidos added.

The star that 2M0437b orbits is too faint to be seen with the unaided eye, but currently from Hawaiʻi, the young planet and other infant stars in the Taurus Cloud are almost directly overhead in the pre-dawn hours, north of the bright star Hokuʻula (Aldeberan) and east of the Makaliʻi (Pleiades) star cluster.