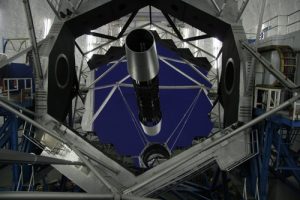 the keck ii telescope showing the 36 hexagonal segments of the primary mirror. a fold mirror in the central tower sends the light to the ao system housed within the enclosure on the right.
Credit: Andrew Cooper

Maunakea, Hawaii – W. M. Keck Observatory can now provide adaptive optics (AO) correction using light from cosmic objects at wavelengths invisible to the naked eye. Near-infrared AO wavefront sensing, in addition to sensing in visible light, is a new capability on the Keck II telescope thanks to a major upgrade, which involves the installation of an innovative infrared pyramid wavefront sensor.

The paper detailing the project is published in the Journal of Astronomical Telescopes, Instruments, and Systems.

Adding a pyramid wavefront sensor in the infrared is exceptionally useful in direct imaging and detecting cooler, hard-to-see astronomical objects such as exoplanets and young dwarf stars where planet formation commonly occurs.

“It’s like adding night-vision goggles to Keck’s AO system,” said lead author Charlotte Bond, a postdoctoral AO scientist who led the project development team. “The infrared pyramid wavefront sensor is especially desirable for the study of baby exoplanets, which are expected to orbit cooler, redder stars or be shrouded in dust, making them faint at visible wavelengths but relatively bright in the infrared.”

AO technology removes the blurring effect caused by turbulence in the Earth’s atmosphere, resulting in sharper views of the universe. This technique relies on a star, either a real one or an artificial star created by a laser, near the object of interest as a reference point; the wavefront sensor measures the atmospheric blurring of the starlight, then a deformable mirror shapeshifts 1,000 times per second to correct the distortions.

The new wavefront sensor is highly-sensitive; it uses a four-sided pyramid prism to split the incoming starlight and produce four images of the telescope’s primary mirror on a detector placed behind the prism. The distribution of light between the four images provides superior accuracy in measuring atmospheric blurring.

The University of Hawaiʻi Institute for Astronomy provided the camera for the pyramid wavefront sensor which is based on a new technology, very low noise, infrared avalanche photodiode array.

The Keck II telescope’s AO upgrade also involves a new GPU-based real-time controller (RTC) that analyzes the image coming from the pyramid wavefront sensor then controls the deformable mirror to correct the atmospheric distortions. The software architecture implemented on the RTC is based on code developed by Olivier Guyon at Subaru Telescope.

“This has been one of the most exciting projects I’ve ever worked on,” said co-author Sylvain Cetre, a software engineer at Keck Observatory and one of the lead project developers. “The new RTC performs heavy computations in the shortest time possible at very high speeds, resulting in a dramatic improvement in image quality.”

The success of the Keck II telescope AO upgrade was most recently proven in May by Jason Wang, a Heising-Simons Foundation 51 Pegasi b Fellow at Caltech, when he and his team tested the new technology and captured remarkable direct images of the birth of a pair of giant exoplanets orbiting the star PDS 70. 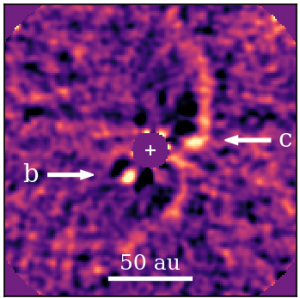 The upgrade was also used during the testing phase over the past year to study a nearby binary star whose past orbit was the closest known flyby to our solar system.

Keck Observatory has since made the new AO system available for regular science observations, beginning in August of 2020.

With this upgrade in place, astronomers can now take images with more exquisite detail than ever before. This advanced AO capability will be used to deepen our knowledge of planetary formation, dark matter, dark energy, and more.

According to Zoran Ninkov, a program director at the National Science Foundation, “NSF’s Advanced Technologies and Instrumentation program and Mid-Scale Innovations Program have supported advances in AO systems like this, which allow ground-based telescopes to attain images as sharp as those obtained from space. This new infrared pyramid system at Keck will provide an exciting new window on faint and cool objects like exoplanets, perhaps even finding some that could support life.”

“I had been thinking about the potential performance advantages of a near-infrared wavefront sensor for well over a decade,” said Wizinowich. “It is gratifying to see this breakthrough technology finally manifest.”

This project was supported by NSF’s Advanced Technologies and Instrumentation program (award number 1611623) and developed in collaboration with the University of Hawaiʻi (UH), Caltech, Subaru Telescope, Arcetri Observatory, and Marseille Astrophysics Laboratory. Wizinowich served as the Principal Investigator who worked with co-Principal Investigators Dimitri Mawet, astronomy professor at Caltech and senior researcher at JPL, and Mark Chun, specialist/associate director of UH Institute for Astronomy – Hilo. 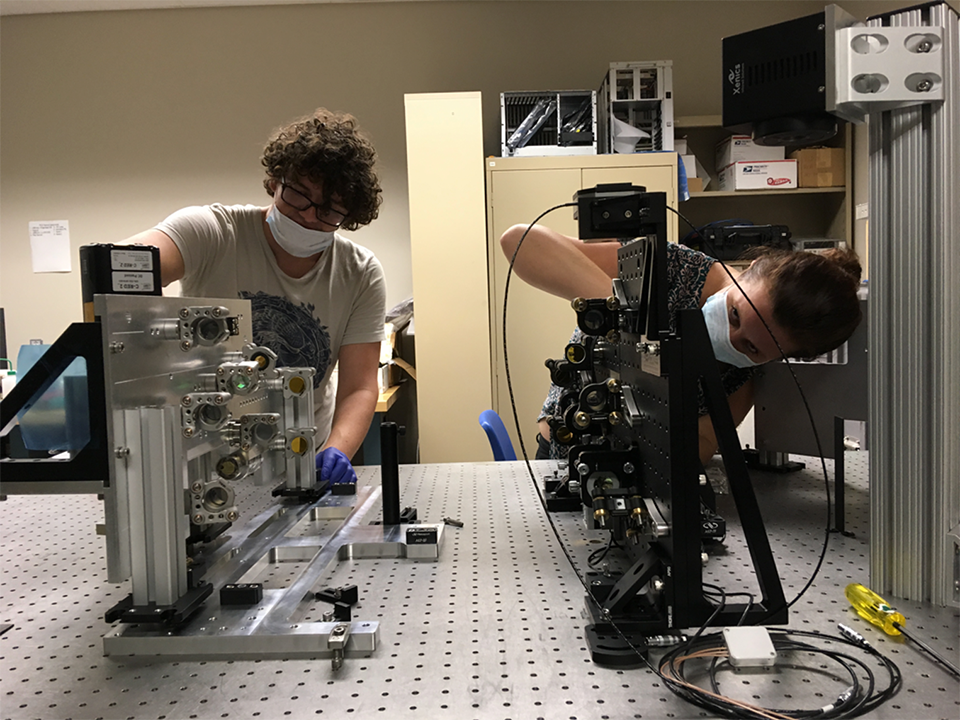 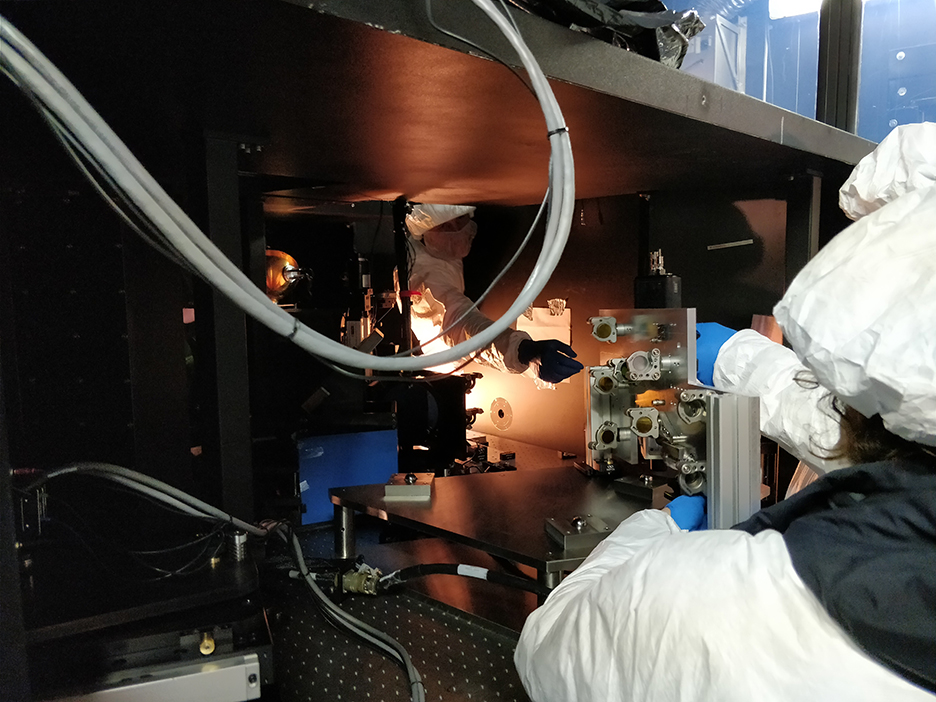 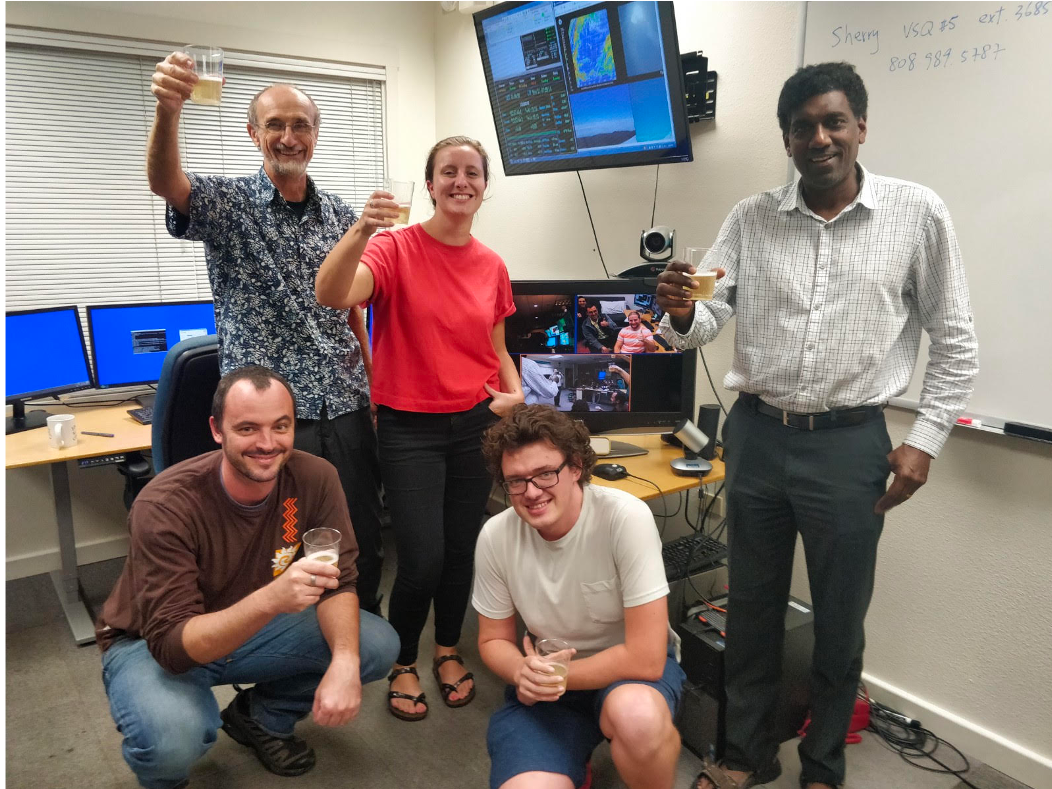 The W. M. Keck Observatory telescopes are among the most scientifically productive on Earth. The two 10-meter optical/infrared telescopes on the summit of Maunakea on the Island of Hawaii feature a suite of advanced instruments including imagers, multi-object spectrographs, high-resolution spectrographs, integral-field spectrometers, and world-leading laser guide star adaptive optics systems. Keck Observatory is a private 501(c) 3 non-profit organization operated as a scientific partnership among the California Institute of Technology, the University of California, and the National Aeronautics and Space Administration. The Observatory was made possible by the generous financial support of the W. M. Keck Foundation. The authors wish to recognize and acknowledge the very significant cultural role and reverence that the summit of Maunakea has always had within the Native Hawaiian community. We are most fortunate to have the opportunity to conduct observations from this mountain.

The National Science Foundation (NSF) is an independent federal agency created by Congress in 1950 “to promote the progress of science; to advance the national health, prosperity, and welfare; to secure the national defense…” NSF is vital because it supports basic research and people to create knowledge that transforms the future. This type of support: Is a primary driver of the U.S. economy, enhances the nation’s security, advances knowledge to sustain global leadership. With an annual budget of $8.3 billion (FY 2020), NSF is the funding source for approximately 25 percent of all federally supported basic research conducted by America’s colleges and universities. In many fields such as mathematics, computer science and the social sciences, NSF is the major source of federal backing.

ABOUT THE ADVANCED TECHNOLOGIES AND INSTRUMENTATION PROGRAM

The Advanced Technologies and Instrumentation (ATI) program provides individual investigator and collaborative research grants for development of new technologies and instrumentation for astronomy and astrophysics. The program supports overarching science objectives of the Division of Astronomical Sciences. Development of innovative, potentially transformative technologies are encouraged, even at high technical risk. Supported categories include but are not limited to:  advanced technology development or concept feasibility studies and specialized instrumentation to enable new observations that are difficult or impossible to obtain with existing means.  Proposals may include hardware and/or software development and/or analysis to enable new types of astronomical observations. The program encourages making products of research available to the public. It also encourages community coordination of technology and instrumentation development efforts via an annual Principal Investigators meeting.