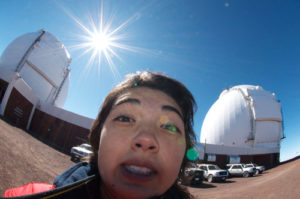 Young people these days. They go through high school and college, trying to find their way in the world with gloom, doom and debt all around them. The path to becoming a highly skilled and employable worker is not easy, despite the unending media reports that America needs such people more than ever. Is it any wonder, then, that today?s youth are often characterized as an aimless, unmotivated generation?

Well yes, actually, it is a wonder. Just a few minutes of conversation with some of the young people who have been summer interns at Keck Observatory makes it crystal clear that the listless youth stereotype is totally false. What?s more, it becomes obvious that Hawaii is no backwater when it comes to science and technical careers.

?Hawaii is great because students like me have access to places like Keck and the HPA Energy Lab,? said Mariko Thorbecke, currently a digital communications intern at Keck Observatory as well as an intern at the Hawaii Preparatory Academy Energy Lab. At Keck she is tasked with researching and assembling a video recording and webcasting system so that future Keck Astronomy Lecture Series will be broadcast around the world on the Internet.

Although Thorbecke started her Keck internship with a primary interest in computer science and a love of physics instilled by her HPA physics teacher, Jerry Bleckel, she has since discovered a range of new interests and other career paths open to her. Communicating science is one of them.

?I would have never thought of a career in astronomy,? said Thorbecke. ?I thought it was just stars and planets.? Now she sees it as a fantastic field where physics and technology are redefining the nature of the universe.

Christina Balkaran, another one of Keck?s summer interns, was already in love with astrophysics when she started her position with support astronomer Greg Wirth. She came to the Big Island from her home state of Connecticut, where she is studying astrophysics at Connecticut College. Balkaran?s project has been to process loads of raw data about a dwarf galaxy that is orbiting the Andromeda galaxy. The data were collected with the Keck II telescope?s DEIMOS instrument several years ago, just waiting for someone like Balkaran to analyze it for new information about the cosmos.

?I?m very, very lucky,? said Balkaran, who is part of the first generation in her family to attend college. She was not only able to work on a real astronomy project with astronomers at a world-class observatory, but she also discovered there are skills involved in being an astronomer that go beyond understanding physics and outer space. There is also a huge amount of engineering and computer programming done at Keck, which was both a surprise and an opportunity for Balkaran to pick up some of those skills at Keck. ?It really makes you appreciate what everyone does here.?

Engineering intern Sean Jones is taking home similar lessons. He earned his internship through the Akamai Workforce Initiative, which has been sending college students to Keck, CFHT and other observatories on the Big Island for years. Jones is an engineering student at UH Manoa and an Oahu native. His project helped to design a new platform that will be placed high up on the walls of one of the Keck telescope domes to hold equipment for the next generation in adaptive optics systems (a technology which cancels out the starlight-distorting effects of the Earth?s atmosphere).

?This was a whole project design, from scratch,? Jones said. ?I did make a lot of progress and I think learning this design process will serve me very well.?

But perhaps an even bigger revelation for Jones was discovering that there are actually real engineering careers in Hawaii.

?It gave me some insight into good jobs that are not the Mainland,? said Jones. ?After this, I see there are definitely opportunities for mechanical engineers in Hawaii.?

Nor are the interns the only ones gaining from their time at Keck.

?We do get real benefits,? said Keck Operations Engineering Manager Craig Nance. Over the years, Nance has mentored five Akamai interns who how have done important and sometimes very high-profile projects. For example, if you have ever looked online at the Keck Observatory webcams on Mauna Kea, you are seeing the product of an Akamai intern. Another intern installed anemometers to measure wind speeds in the air ventilation tunnels of the big telescope domes. These have allowed engineers to learn how much air was moving and whether energy could be saved?and the observatory made a bit greener?by turning down the giant fans that keep the telescopes at a steady temperature (the answer was yes, energy could be saved).

There is also a less obvious, incidental benefit to Keck, which comes from having young people working among Keck?s professional staff, some with decades of experience and at the peaks of their careers.

?The interns? energy and enthusiasm helps to freshen my view of what I do,? said Keck librarian/archivist Peggi Kamisato, who has mentored interns in the past.

And of course, there is always a benefit of all these young people taking the momentum they build at Keck out into the world to build their careers and contribute to other workplaces, explained Hilton Lewis, Keck?s deputy director. That sometimes even leads interns, years later, right back to Keck and other observatories as full-time staff.

?We are, after all, helping to generate future engineers and scientists to lead the future of astronomy,? said Lewis.

Young people these days. They face big challenges, and they?re more than up to them.