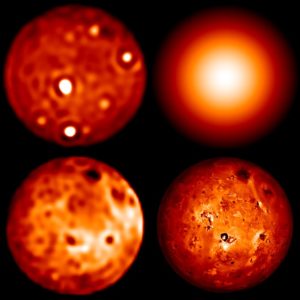 w. m. keck observatory
Surface details captured with Keck adaptive optics in the K-band (upper left) show a comparable level of detail to visible light pictures taken with the NASA Galileo orbiter (upper right). The L band image (lower left) is dominated by active volcanic hot spot emissions, such as Loki, located near the center of the disk. These spots can now be monitored from the ground. An image of Io without adaptive optics (lower right) shows what the Keck telescope would see without adaptive optics. Note that no hot spots are detected in this image.

MAUNA KEA, Hawaii (June 3rd, 2002) The highest resolution infrared global images ever taken of Jupiter’s volcanic moon, Io, are now available from the W.M. Keck Observatory and UC Berkeley in a unique animated movie and 3D Java applet. The images provide a complete survey of Io’s surface during one full rotation and demonstrate the power of adaptive optics, enabling astronomers to study phenomena from the Earth that previously could be studied only from space.

“Adaptive optics technology is now able to produce eightfold improvements in image quality beyond what has previously been possible”, said Dr. Frederic H. Chaffee, director of the W. M. Keck Observatory. “The Ionian images released today show features on its surface as small as 60 to 120 miles across. This is equivalent to being able to distinguish the two headlights of a single car in St. Louis while looking at them from Los Angeles, 1800 miles away.”

The Keck II 10-meter mirror telescope, with its adaptive optics system, provides the highest resolution pictures ever taken from an Earth-based telescope. The Keck images released today show a similar level of detail to data taken by the NASA’s Galileo orbiter, a spacecraft that came within 400,000 miles of Io’s surface. By contrast, the Keck telescopes on Earth are more than 390 million miles away (1000 times farther) from Io.

“Observations such as these are the only method by which we can obtain complete spatial coverage of Ionian volcanic activity and at resolutions better than what we find with the global Galileo data for this wavelength range”, said Dr. David Le Mignant, W.M. Keck Observatory.

The Io movie was produced from 14 pictures taken with the Keck infrared camera (NIRC2) placed behind the adaptive optics system. This camera is capable of producing images with a Strehl ratio of up to 85 percent. Strehl is a measure of the corrected image and a Strehl ratio of 100 percent equals a fully corrected, perfect image. The quality of these images is so high, it’s as if the Keck telescope were taking pictures from space.

The images of Io were taken at a wavelength of 3.5 microns (L-band) and were spaced approximately 25 degrees apart in Ionian longitude such that the entire surface of Io was recorded during a six-night period in December 2001. The contrast and resolution of the images were then increased by using a numerical process named Myopic Iterative Step Preserving Restoration Algorithm (MISTRAL), a deconvolution, or image enhancement, method developed for planetary observations by the Office National d’Etudes et de Recherche Aerospatiales (ONERA). Then, the images were converted to an animation to show one full rotation of Io as it orbits Jupiter. Finally, the W.M. Keck Observatory created a Java applet to add interactive control and synchronous comparisons to pictures taken at visible wavelengths with the Galileo orbiter.

“These new observations give important clues about the temperature and composition of Io’s volcanic structures such as lava lakes, fire fountains, calderas and lava tubes. With the Galileo mission ending, adaptive optics systems will be the only tools available to study this exotic extra-terrestrial volcanism,” said Dr. Franck Marchis of UC Berkeley.

This observational study of Io was partially supported by the France-Berkeley Fund and by the National Science Foundation and Technology Center for Adaptive Optics, managed by the University of California at Santa Cruz under cooperative agreement No. AST-9876783.

The W.M. Keck Observatory, located at the summit of Mauna Kea in Hawaii, provides astronomers from associated institutions access to two 10-meter optical telescopes, the world’s largest. Each telescope features a revolutionary primary mirror composed of 36 hexagonal segments that work in concert as a single piece of reflective glass to provide unprecedented power and precision. Both Keck telescopes are equipped with adaptive optics systems, which provide real-time correction to images affected by atmospheric turbulences. The NIRC2 instrument was built at Caltech by a team led by Keith Matthews. Funding for both telescopes, the NIRC2 instrument, and the Keck II adaptive optics system was provided by the W.M. Keck Foundation. The observatory is operated by the California Association for Research in Astronomy, a partnership of the California Institute of Technology, the University of California, and the National Aeronautics and Space Administration (NASA).