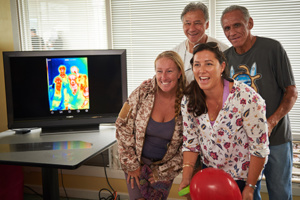 kyle lanclos/w. m. keck observatory
Keck Observatory Open House attendees had a chance to see how much they radiated by taking a picture with an infrared camera, while learning how the Keck Observatory telescopes use infrared to “see” the universe.

FAMILIES STEP INTO “PORTAL TO THE UNIVERSE”

Waimea, Hawaii Island – This is a special event that happens once every three to five years, one that offers the public a chance to get a behind-the-scenes look inside W. M. Keck Observatory.

On Saturday, November 11, Keck Observatory welcomed the community to a free, family-friendly Open House at its Waimea headquarters. Employees transformed nearly an acre of the campus into a science festival filled with hands-on educational activities, designed to ensure a memorable experience for everyone, from keiki to kupuna.

“This is our signature outreach event, and we always look forward to seeing friends and families walk through our doors, captivated by curiosity,” said Keck Observatory Director Hilton Lewis. “The revolutionary science that comes from Keck would not be possible without the support from our community. We believe in giving back by sharing our exciting discoveries. Our hope is that people will come away with the same love for astronomy that inspires us each and every time we peer into the universe.”

The event, themed “Keck Observatory: Your Portal to the Universe,” drew more than 1,000 people. The last time Keck Observatory hosted an Open House was in 2013. Some of the most popular activities were featured again this year, including: New to Keck Observatory’s Open House was “Ask an Astronomer” with special guests Dr. Charles Beichman, executive director of the NASA Exoplanet Science Institute (NExScI) at Caltech, and Dr. Raja GuhaThakurta of UC Santa Cruz. Both wore wizard hats so the community could easily spot them and ask any astronomical questions they had.

Also, for the very first time at Open House, the Keck Observatory Optics team displayed one of the telescope’s innovative mirror segments and showed how it is engineered to work with 35 neighboring mirrors with nanometer precision. Together, the segments give the twin telescopes the power of a single 10-meter diameter mirror – the largest on Earth.

“It’s exciting to see people’s eyes light up, especially the kids, when we show them the game-changing technologies and ground-breaking research we have right here in Hawaii,” said Keck Observatory Outreach Coordinator Shelly Pelfrey. “My colleagues, including astronomers, engineers, and technicians, see this as an opportunity to educate and inspire the next generation, to imagine themselves working here at Keck or other observatories, right here in Hawaii.”

One such success story is that of Brialyn Onodera of Hilo, one of the guest speakers at the Open House “Keck Theater.” The Kamehameha Schools grad worked as a summer intern at Keck Observatory in 2015 through the Akamai Workforce Initiative, and again in 2016 at the Daniel K. Inouye Solar Telescope (DKIST) on Maui. Just this past September, after graduating from University of Hawaii at Manoa, DKIST hired Onodera as a full-time engineer.

“People think there aren’t too many astronomy opportunities in Hawaii but there are. You just have to network and know where to look for them,” Onodera said. “Growing up on the Big Island of Hawaii, I was always exposed to the telescopes. I always thought it’d be cool to work for one of the observatories but I didn’t think it was realistic to get a job right after college. But then I landed this great opportunity to work for DKIST and help build the largest solar telescope in the world – it’s amazing!”

Along with Onodera, there were many other young bright minds who attended Keck Observatory’s Open House. The Boy Scouts of America’s local Cub Scouts Pack 47, high school students from Hawaii Preparatory Academy, Honokaa High School, Pahoa High School, and Parker School, as well as college students from University of Hawaii at Hilo’s Astronomy Department and UH Hilo’s Astrophysics Club, volunteered to lend a hand at the event.

W. M. Keck Observatory is among the world’s largest, most versatile, and scientifically impactful astronomical facilities. Located atop Maunakea on Hawaii Island, home of one of the best astronomical observation sites on Earth, Keck Observatory’s revolutionary twin, 10-meter optical/infrared telescopes feature a suite of advanced instruments including imagers, multi-object spectrographs, high-resolution spectrographs, integral-field spectrometers, and world-leading laser guide star adaptive optics systems. The Observatory is a private 501(c) 3 non-profit organization and a scientific partnership of the California Institute of Technology, the University of California, and NASA. For more information, visit: www.keckobservatory.org