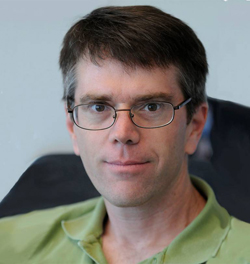 Charles Steidel was the recipient of the 2010 Cosmology Prize of The Peter and Patricia Gruber Foundation. The award recognizes his revolutionary studies using the W. M. Keck Observatory of the most distant galaxies in the Universe.

“Professor Steidel pioneered the techniques needed to find young galaxies and led the efforts that have opened a direct observational window to a time when the Universe was only about one tenth of its current age,” the official citation said.  Steidel will receive the $500,000 award, as well as a gold medal, in October at the University of Chicago in Chicago, Illinois, where he will also deliver a lecture.

“My main scientific interest is, and has been, how did the first galaxies form? When did they form and has the way that galaxies form changed over time?” Steidel said.

In order to answer those questions, he and his colleagues needed to observe galaxies at different stages of the Universe’s history. The astronomers were especially interested in so-called “primordial galaxies,” which date from a period of more than 12 billion years ago, when the Universe was less than two billion years old.

Astronomers had already observed a handful of objects at such a distance, but most were extreme, such as quasars and not normal, star-forming galaxies. Steidel realized, however, that stars, and therefore galaxies, are rich in hydrogen. Hydrogen absorbs radiation with wavelengths shorter than 91.2 nanometers—what astronomers call the Lyman limit. As a result, galaxies are mostly invisible below the Lyman limit, in the far ultraviolet region of the electromagnetic spectrum, but visible above it.

Although light with a wavelength of 91.2 nanometers is not accessible on Earth due to the interference of the atmosphere, Steidel and his colleagues knew that the expansion of the Universe would stretch the length of the waves until they were visible. And, they knew a wave of light with a length of 91.2 nanometers that traveled 12 billion lightyears would have stretched to a wavelength observable with ground-based telescopes. If they could observe these distant objects and detect a sharp cutoff, or break, at that wavelength, they would know the objects were galaxies.

After outlining their approach in papers now considered classics, Steidel and his colleagues discovered their first batch of distant galaxies, called Lyman Break Galaxies, in October 1995, using the Keck I telescope and its Low Resolution Imaging Spectrograph.

“My entire scientific focus came to be during my first nights on the Keck telescope in 1995. Ever since then, I think of Keck as an extension of where I work, almost like an extended family,” Steidel said. His team’s observations using his new technique were the first to show that galaxies were common, even at such an early point in the Universe’s evolution.

“Using Keck, Chuck Steidel has revolutionized our understanding of how galaxies in the early Universe form and change over cosmological time. His work is very deserving of this prestigious award,” said Taft Armandroff, the director of the W. M. Keck Observatory.

Steidel’s award is the second Gruber Prize for Cosmology given to an astronomer whose scientific discoveries were made using data taken with the Keck telescopes. In 2007, two teams led by Saul Perlmutter and Brian Schmidt, respectively, received the award to recognize their observations revealing that the expansion of the Universe is accelerating. Their discovery led to the idea of an expansion force, called dark energy.

In the past five years, Steidel has extended his study of galaxy formation by moving somewhat forward in time, to the period about 10 to 12 billion years ago—a peak era for star formation, supernova explosions, and the accumulation of gas by supermassive black holes. This year he is publishing his first paper about a new technique that uses multiple “skewers” of one-dimensional views through the Universe to create a composite 3-D view of these highly active galaxies spewing gas into intergalactic space. Using this method, Steidel and his team have discovered that a galaxy can influence a region in space one hundred times the diameter of the galaxy itself.

Click here to listen to Dr. Steidel discuss his award and his research using Keck Observatory.