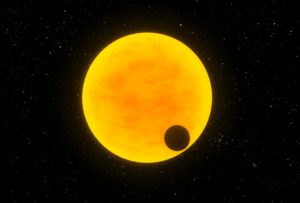 Transit of a Planet Across the Disk of a Star

MAUNA KEA, Hawaii (March 29th, 2000) With the number of planets discovered orbiting suns beyond our Solar system now at 30 and counting, astronomers at the W.M. Keck Observatory have made an astonishing advance in the hunt for extra-solar planets.
In a press conference today (Wednesday, March 29, 2000) at NASA headquarters in Washington, D.C., the team of astronomers headed by Paul Butler, Geoff Marcy and Steve Vogt announced the discovery of two planets that may be smaller in mass than Saturn.

Saturn is one-third the mass of Jupiter. Of the 30 extrasolar planets around Sun-like stars detected to date, all have been the size of Jupiter or larger. The existence of these Saturn-sized candidates suggests that many stars harbor smaller planets, in addition to the Jupiter-sized ones.

And in important step forward in the tumultuous field of planetary-formation theories, finding Saturn-sized planets reinforces the theory that planets form by a snowball effect of growth from small ones to large, in a star-encircling dust disk. The 20-year-old theory predicts there should be more smaller planets than large planets, and this is a trend the researchers are beginning to see in their data.

“It’s like looking at a beach from a distance,” explained Geoff Marcy of the University of California at Berkeley. “Previously we only saw the large boulders, which were Jupiter-sized planets or larger. Now we are seeing the ‘rocks,’ Saturn-sized planets or smaller. We still don’t have the capability of detecting Earth-like planets, which would be equivalent to seeing pebbles on the beach.”

Since Jupiter alone is three times the mass of Saturn, this fact has left the nagging possibility open that some of the extrasolar planets might really be stillborn stars, called brown dwarfs, which would form like stars through the collapse of a gas cloud. But now researchers are better assured these “Jupiters” are only the tip of the iceberg, and there are many more planets to be found that are the mass of Saturn or smaller.

“Now we are confident we are seeing a distinctly different population of bodies that formed out of dust disks like the disks Hubble Space Telescope has imaged around stars,” said Marcy.

The discovery was made by planet-sleuths Geoff Marcy of San Francisco State and UC-Berkeley; Paul Butler of the Carnegie Institution of Washington; and Steve Vogt of the University of California, Santa Cruz, using the 10-meter Keck I telescope on Mauna Kea, Hawaii.

Their planet-hunting project is supported by NASA and the National Science Foundation and is a key element of the NASA Origins project to identify other planetary systems. The proposed Keck Interferometer on Mauna Kea will continue the explorations of these other planetary systems by enabling astronomers to find even smaller planets and further identify common characteristics among these other Solar systems.

The newly-discover Saturn-mass planets orbit very close to their stars. They whirl around their parent stars with periods of 3.02 days and 75 days respectively. This allowed for their relatively rapid discovery.

The astronomers detected the small wobble of a star caused by the gravitational tug of the unseen planets. For the past five years Marcy and Butler have used this technique successfully to catalog 21 extrasolar planets. Boosted by the light-gathering power of Keck, they have steadily increased the precision of their measurements so they can look for the gravitational effects of ever-smaller bodies. In this latest detection, the change in a star’s velocity—rhythmically moving toward and then away from Earth—is only 36 feet per second, a little faster than a human sprint.

They probably formed at a farther distance from the star, where they could accumulate cool gas, and then migrated into their present orbits. Along the way they would have disrupted the orbits of any smaller terrestrial planets like Earth. These “marauding” gas giants seem more the rule than the exception among the planets surveyed so far, because Marcy and Butler’s detection technique favors finding massive planets in short-period orbits. This seems to be the case for approximately six percent of the stars surveyed so far.