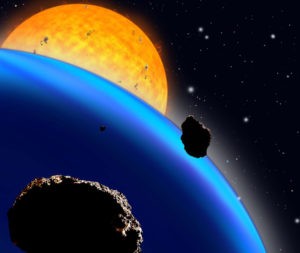 david a. aguilar, harvard-smithsonian center for astronomy
The Keck I 10-meter telescope confirmed the discovery of a planet that crosses in front of its parent star, as seen from earth. This artist's conception of planet TrES-1, was the first to be discovered in a survey conducted by a network of small, relatively inexpensive telescopes. The telescopes provided the most promising candidates, and follow up observations at the W. M. Keck Observatory confirmed the detection.

MAUNA KEA, Hawaii (August 24th, 2004) Fifteen years ago, the largest telescopes in the world had yet to locate a planet orbiting another star. Today telescopes no larger than those available in department stores are proving capable of spotting previously unknown worlds. A newfound planet detected by a small, 4-inch-diameter telescope demonstrates that we are at the cusp of a new age of planet discovery. Soon, new worlds may be located at an accelerating pace, bringing the detection of the first Earth-sized world one step closer.

“This discovery demonstrates that even humble telescopes can make huge contributions to planet searches,” says Guillermo Torres of the Harvard-Smithsonian Center for Astrophysics (CfA), a co-author on the study.

This research study will be posted online at http://arxiv.org/abs/astro-ph/0408421 and will appear in an upcoming issue of The Astrophysical Journal Letters.

This is the very first extrasolar planet discovery made by a dedicated survey of many thousands of relatively bright stars in large regions of the sky. It was made using the Trans-Atlantic Exoplanet Survey (TrES), a network of small, relatively inexpensive telescopes designed to look specifically for planets orbiting bright stars. A team of scientists co-led by David Charbonneau (CfA/Caltech), Timothy Brown of the National Center for Atmospheric Research (NCAR) and Edward Dunham of Lowell Observatory developed the TrES network. Initial support for the TrES network came from NASA’s Jet Propulsion Laboratory and the California Institute of Technology.

Although the small telescopes of the TrES network made the initial discovery, follow-up observations at other facilities were required. Observations at the W.M. Keck Observatory which, for the University of California, Caltech, and NASA, operates the world’s two largest telescopes in Hawaii, were particularly crucial in confirming the planet’s existence.

The newfound planet is a Jupiter-sized gas giant orbiting a star located about 500 light-years from the Earth in the constellation Lyra. This world circles its star every 3.03 days at a distance of only 4 million miles, much closer and faster than the planet Mercury in our solar system.

Astronomers used an innovative technique to discover this new world. It was found by the “transit method,” which looks for a dip in a star’s brightness when a planet crosses directly in front of the star and casts a shadow. A Jupiter-sized planet blocks only about 1/100th of the light from a Sun-like star, but that is enough to make it detectable.

To be successful, transit searches must examine many stars because we only see a transit if a planetary system is located nearly edge-on to our line of sight. A number of different transit searches currently are underway. Most examine limited areas of the sky and focus on fainter stars because they are more common, thereby increasing the chances of finding a transiting system. However the TrES network concentrates on searching brighter stars in larger swaths of the sky because planets orbiting bright stars are easier to study directly.

“All that we have to work with is the light that comes from the star,” says Brown. “It’s much harder to learn anything when the stars are faint.”

“It’s almost paradoxical that small telescopes are more efficient than the largest ones if you use the transit method, since we live in a time when astronomers already are planning 100-meter-diameter telescopes,” says lead author Roi Alonso of the Astrophysical Institute of the Canaries (IAC), who discovered the new planet.

Most known extrasolar planets were found using the “Doppler method,” which detects a planet’s gravitational effect on its star spectroscopically by breaking the star’s light into its component colors. However, the information that can be gleaned about a planet using the Doppler method is limited. For example, only a lower limit to the mass can be determined because the angle at which we view the system is unknown. A high-mass brown dwarf whose orbit is highly inclined to our line of sight produces the same signal as a low-mass planet that is nearly edge-on.

“When astronomers find a transiting planet, we know that its orbit is essentially edge-on, so we can calculate its exact mass. From the amount of light it blocks, we learn its physical size. In one instance, we’ve even been able to detect and study a giant planet’s atmosphere,” says Charbonneau.

The TrES survey examined approximately 12,000 stars in 36 square degrees of the sky (an area half the size of the bowl of the Big Dipper). Roi Alonso, a graduate student of Brown’s, identified 16 possible candidates for planet transits. “The TrES survey gave us our initial line-up of suspects. Then, we had to make a lot of follow-up observations to eliminate the imposters,” says co-author Alessandro Sozzetti (University of Pittsburgh/CfA).

After compiling the list of candidates in late April, the researchers used telescopes at CfA’s Whipple Observatory in Arizona and Oak Ridge Observatory in Massachusetts to obtain additional photometric (brightness) observations, as well as spectroscopic observations that eliminated eclipsing binary stars.

In a matter of two month’s time, the team had zeroed in on the most promising candidate. High-resolution spectroscopic observations by Torres and Sozzetti using time provided by NASA on the 10-meter-diameter Keck I telescope in Hawaii clinched the case.

“Without this follow-up work the photometric surveys can’t tell which of their candidates are actually planets. The proof of the pudding is an orbit for the parent star, and we got that using the Doppler method. That’s why the Keck observations of this star were so important in proving that we had found a true planetary system,” says co-author David Latham (CfA).

The planet, called TrES-1, is much like Jupiter in mass and size (diameter). It is likely to be a gas giant composed primarily of hydrogen and helium, the most common elements in the Universe. But unlike Jupiter, it orbits very close to its star, giving it a temperature of around 1500 degrees F.

Astronomers are particularly interested in TrES-1 because its structure agrees so well with theory, in contrast to the first discovered transiting planet, HD 209458b. The latter world contains about the same mass as TrES-1, yet is around 30% larger in size. Even its proximity to its star and the accompanying heat don’t explain such a large size.

“Finding TrES-1 and seeing how normal it is makes us suspect that HD 209458b is an `oddball’ planet,” says Charbonneau.

TrES-1 orbits its star every 72 hours, placing it among a group of similar planets known as “hot Jupiters.” Such worlds likely formed much further away from their stars and then migrated inward, sweeping away any other planets in the process. The many planetary systems found to contain hot Jupiters indicate that our solar system may be unusual for its relatively quiet history.

Both the close orbit of TrES-1 and its migration history make it unlikely to possess any moons or rings. Nevertheless, astronomers will continue to examine this system closely because precise photometric observations may detect moons or rings if they exist. In addition, detailed spectroscopic observations may give clues to the presence and composition of the planet’s atmosphere.

This joint announcement is being issued simultaneously by CfA, IAC, NCAR, the University of Pittsburgh, and Lowell Observatory.

The W.M. Keck Observatory is operated by the California Association for Research in Astronomy, a scientific partnership of the California Institute of Technology, the University of California, and the National Aeronautics and Space Administration.

Headquartered in Cambridge, Mass., the Harvard-Smithsonian Center for Astrophysics (CfA) is a joint collaboration between the Smithsonian Astrophysical Observatory and the Harvard College Observatory. CfA scientists, organized into six research divisions, study the origin, evolution and ultimate fate of the universe.