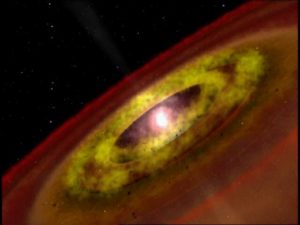 The linked telescopes at the W.M. Keck Observatory on Mauna Kea, known as the Keck Interferometer, comprise the world’s largest optical telescope system. The observation was made of DG Tau, a young star that has not yet begun to burn hydrogen in its core. Such stars are called T-Tauri objects. Observations of DG Tau were made on October 23, 2002, and February 13, 2003, and the findings will appear in an upcoming issue of the Astrophysical Journal Letters.

“We’re trying to measure the size of the hot material in the dust disc around DG Tau, where planets may form,” said Dr. Rachel Akeson, leader of the study team and an astronomer at the Michelson Science Center at the California Institute of Technology in Pasadena. “Studies like this teach us more about how stars form, either alone or in pairs, and how planets eventually form in discs around stars.”

The Keck Interferometer observations revealed a gap of 18 million miles between DG Tau and its orbiting dust disc. Akeson notes that of the extra-solar planets – planets orbiting other stars – discovered so far, roughly one in four lies within 10 million miles of the parent star. Since planets are believed to form within a dust disc, either DG Tau’s disc has a larger-than-usual gap, or the lose-in planets form farther from the star and migrate inward.

“T-Tauri objects had been observed with other instruments, but only the brightest ones were detectable until now,” Akeson said. “With the larger telescopes and greater sensitivity of the Keck Interferometer, we can look at fainter T-Tauri objects, like this one.”

The Keck Interferometer gathers light waves with two telescopes and then combines the waves so they interact, or” interfere” with each other. It’s like throwing a rock into a lake and watching the ripples, or waves, and then throwing in a second rock. The second set of waves either bumps against the first set and changes its pattern, or both sets join together to form larger, more powerful waves. With interferometry, the idea is to combine light waves from multiple telescopes to simulate a much larger, more powerful telescope.

In its ability to resolve fine details, the Keck Interferometer is equivalent to an 85-meter (279-foot)telescope. “The system transports the light gathered by the two telescopes to an optical laboratory located in the central building,” said Dr. Mark Colavita of NASA’s Jet Propulsion Laboratory (JPL), Pasadena, interferometer system architect and lead author of the paper. “In the lab, a beam combiner and infrared camera combine and process the collected light to make the science measurement.”

To make these measurements, the interferometer’s optical system adjusts the light paths to a fraction of a wavelength of light, and adaptive optics on the telescopes remove the distortion caused by Earth’s atmosphere.

“This research represents the first scientific application of an interferometer with telescopes that use adaptive optics,” said Dr. Peter Wizinowich, interferometer team lead for the W.M. Keck Observatory and co-author of the paper.

The development of the Keck Interferometer is managed by JPL for NASA’s Office of Space Science, Washington. JPL is a division of the California Institute of Technology in Pasadena. The W.M. Keck Observatory is funded by Caltech, the University of California and NASA, and is managed by the California Association for Research in Astronomy, Kamuela, Hawaii.