KECK PICTURES OF URANUS SHOW BEST VIEW FROM THE GROUND 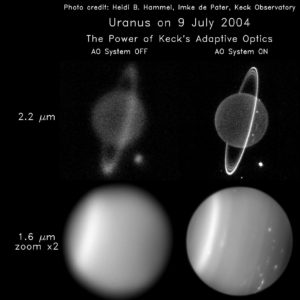 heidi hammel, space science institute, boulder, co/imke de pater, university of california, berkeley/ w. m. keck observatory
The Power of Keck’s Adaptive Optics is demonstrated in two sets of exposures that compare Keck AO system off (left) to Keck AO system on (right). Upper: Uranus, its rings and moon Miranda at near infrared wavelengths of 2.2 microns. Lower: Uranus and its atmospheric details as seen in near infrared wavelengths of 1.6 microns. The image has been doubled in size. Date is Universal Time.

MAUNA KEA, Hawaii (November 10th, 2004) Observations of Uranus conducted at the W. M. Keck Observatory in Hawaii are surprising astronomers with the level of detail they can see from the ground. Two separate teams of astronomers, one from Berkeley/SSI and one from Wisconsin, used advances in Keck adaptive optics (AO) to help make major scientific discoveries regarding the planet’s atmosphere and ring system. The results are a powerful example of how ground-based telescopes are helping astronomers study planets in the outer solar system that once could only be studied from space. Early results were announced today at the 36th meeting of the American Astronomical Society’s Division for Planetary Sciences.

“We are stunned by the quality and detail of these images,” said Dr. Frederic Chaffee, director of the W. M. Keck Observatory in Hawaii. “These are the best pictures of Uranus that have ever been produced by a telescope, and they are opening new windows of understanding for this unique and special world.”

The most recent observations of Uranus show the planet as it approaches its southern autumnal equinox, which takes place in 2007 (the length of the year on Uranus is 84 Earth years). The two teams used narrow filters at infrared wavelengths to study features in the atmosphere and ring sets, both of which are enormously enhanced by the Keck adaptive optics system. Ground-based telescopes are helping astronomers track climatic changes in the planet’s atmosphere.

“People may think that Uranus is relatively inactive, but these images show that Uranus is definitely changing, and perhaps quite dramatically,” said Imke de Pater, professor of astronomy at University of California, Berkeley, lead investigator for the team responsible for the Berkeley observations. “What is causing it, no one knows for sure. Only time will tell.”

The new images are the result of many general improvements to the Keck adaptive optics system. A new calibration technique removes artifacts previously present in the images when measuring the atmospheric distortion with a planet instead of a point source of light. Another major improvement is a new wavefront reconstructor to improve the data processing within the AO system. This dramatically reduces the effect that “noise” or errors in measuring the atmospheric distortion have on the image quality.

A dramatic visualization of the power of adaptive optics (Figure 1) was made by Dr. Heidi Hammel of the Space Science Institute in Boulder, Colorado and Dr. Imke de Pater of UC Berkeley, California. They took images of Uranus and its rings with the second-generation Near Infrared Camera (NIRC2) behind the AO system on the Keck II telescope, first with the AO system off, and then with the AO system on. In this figure, the ring system is more readily visible through the 2.2-micron filter because methane absorption at this wavelength renders the planet extremely dark except for a few high altitude clouds. In contrast, the 1.6-micron image shows deeper atmospheric cloud structure, including many discrete features peppering the planet’s northern hemisphere. At 1.6 microns, the rings are just barely visible as a faint streak across the planet’s northern hemisphere.

“The differences are stunning,” said Hammel. “The detail provided by Keck’s AO system for the atmosphere and the rings of Uranus fundamentally changes the science we can achieve.”

Later observations conducted by the team at University of Wisconsin-Madison, also with the Keck II AO system, were formed into a composite image in which the highest clouds appear white, the middle level clouds appear bright green, and the lower clouds appear darker blue (Figure 2). The color balance used to reveal the cloud structure in these infrared exposures, which are not normally visible to human eyes, makes the ring system appear red in these images and is an artifact of the process. The higher clouds are most abundant in the planet’s northern hemisphere.

Dr. Lawrence Sromovsky, principal investigator for the Wisconsin observations said, “Twenty years ago we simply couldn’t see the types of details in the outer solar system the way we can today with large, ground-based telescopes like Keck. These images actually reveal many more cloud features than the Voyager spacecraft found after traveling all the way to Uranus.”

Until recently, little was known about the oddball planet, which gets its name from the Greek word “Ouranos,” a mythological god who personifies the heavens. Uranus lies tipped on its side, probably the result of an ancient cosmic collision, and its magnetic field lays strangely off-set from and tilted with respect to the planet’s rotational pole. In 1986, the Voyager 2 spacecraft sent pictures to earth of what appeared to be a non-descript ball suspended in space. At that time, Uranus’ South Pole was pointed almost directly at the sun, and the North Pole pointed away. Now, more than 18 years later, the planet is drawing near the point in its orbit where the planet’s equator will be pointing toward the Sun, and both poles will get about 17 hours of sunlight a day.

On Earth, the massive storms captured in the new pictures of Uranus would engulf nations as large as the continental United States, about 3 million square miles. But at a distance of more than 1.6 billion miles, even such large storms are barely detectable and require the use of the world’s most powerful telescopes.

The W. M. Keck Observatory is operated by the California Association for Research in Astronomy (CARA), a non-profit 501 (c) (3) corporation whose board of directors includes representatives from the California Institute of Technology, the University of California, and the National Aeronautics and Space Administration. For more information, please visit www.keckobservatory.org.