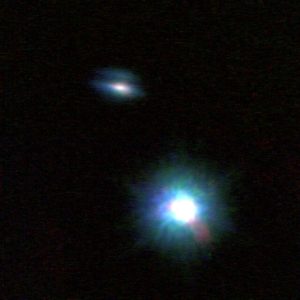 w.m. keck observatory
First light image of the Keck LGS AO system. The lens-like nebula at upper left is a disk of dust and gas surrounding the young star HK Tau B. The star is hidden from direct view, seen only in light reflected off the upper and lower surfaces of the disk.

KAMUELA, Hawaii (October 7th, 2003) A major milestone in astronomical history took place last month at the W.M. Keck Observatory when scientists, for the first time, used a laser to create an artificial guide star on the Keck II 10-meter telescope to correct the blurring of a star with adaptive optics (AO). Laser guide stars have been used on smaller telescopes, but this is their first successful use on the current generation of the world’s largest telescopes. The resulting image (Figure 1), captured by the NIRC2 infrared camera, was the first demonstration of a laser guide star adaptive optics (LGS AO) system on a large telescope. When complete, the LGS AO system will mark a new era of astronomy in which astronomers will be able to see virtually any object in the sky with the clarity of adaptive optics.

“This is one of the most gratifying moments in all my years at Keck,” remarked Dr. Frederic Chaffee, director of the W.M. Keck Observatory the evening the observations were made. “Like any positive first light result, there is much to be done before the system can be considered operational. But also like any positive first light result, it shows that it can be done, and gives us great optimism that our goals are not impossible dreams, but are instead attainable realities.”

Adaptive optics is a technique that has revolutionized ground-based astronomy through its ability to remove the blurring of starlight caused by the earth’s atmosphere. Its requirement of a relatively bright “guide star” in the same field of view as the scientific object of study has generally limited the use of AO to about one percent of the objects in the sky.

To overcome this restriction, in 1994 the W.M. Keck Observatory began working with Lawrence Livermore National Labs (LLNL) to develop an artificial guide star system. By using a laser to create a “virtual star,” astronomers can study any object in the vicinity of much fainter (up to 19th magnitude) objects with adaptive optics and reduce its dependence on bright, naturally occurring guide stars. Doing so will increase sky coverage for the Keck adaptive optics system from an estimated one percent of all objects in the sky, to more than 80 percent.

“This new capability of using a laser guide star with a large telescope has invited astronomers to start exploring the night sky in a much more comprehensive manner,” said Adam Contos, optics engineer at the W.M. Keck Observatory.“In the future, I would expect most major observatories to be installing similar systems to take advantage of this incredible enhancement to their AO capabilities.”

In January 2001, after more than seven years in development, the Keck and LLNL teams celebrated the completion of the Keck laser guide star system. The artificial star results when light from a 15-watt dye laser causes a naturally occurring layer of sodium atoms to glow about 90 km (56 miles) above the earth’s surface. It would take another two years of sophisticated research and design before the laser system could be integrated into the Keck II adaptive optics system.

In the early morning hours of September 20th, all subsystems finally came together to reveal the unique capability of the Keck LGS AO system and its potential to resolve extremely faint objects. The system locked on a 15th magnitude star, a member of a well-known T Tauri binary called HK Tau and revealed details of the circumstellar disk of the companion star. It was the first time an adaptive optics system on a very large telescope had ever used an artificial guide star to resolve a faint object.

A key challenge the LGS AO team faced was how successful the efforts would be to integrate and achieve good performance measurements for each required sub-system. Concerns about the power of the laser and its spot quality, operation of the laser traffic control system, the ability of the new sensors to lock on fainter guide stars, and being able to optimize the image quality through an accurate understanding of the aberrations that could not be measured by using the laser guide star, were all factored into the evening’s observing.

“First light was a superb team effort,” said Dr. Peter Wizinowich, team leader for the adaptive optics team at W.M. Keck Observatory. “It was very satisfying to have each of the many subsystems perform so well on our first attempt. To quote Virgil, ‘Audentes Fortuna Juvat,’ fortune favors the bold.”

The quality of the LGS AO first light images was extremely high. While locked on a 14th magnitude star, the Keck LGS AO system recorded “Strehl ratios” of 36 percent (at 2.1 micron wavelength, 30-second exposure time, Figure 3), compared to four percent for uncorrected images. Strehl ratios measure the degree to which an optical system approaches “diffraction-limited” perfection, or the theoretical performance limit, of the telescope.

Another performance metric, the “full width at half maximum” (FWHM), for this 14th magnitude star was 50 milli-arcseconds, compared to 183 milli-arcseconds for the uncorrected image. FWHM measurements help astronomers determine the actual edges of an object, where the detection may be imprecise or difficult to determine. The measurement of 50 milli-arcseconds is about equivalent to being able to distinguish a pair of car headlights in New York while standing in Los Angeles.

Throughout the evening, the laser guide star held steady and bright, shining at an approximate magnitude of 9.5, about 25 times fainter than what the human eye can see, but ideal for the Keck adaptive optics system to measure and correct for atmospheric distortions

“Even with just this first test, astronomers are already clamoring to use the laser guide star system to study distant galaxies with an unprecedented resolution and power,” said Dr. David Le Mignant, adaptive optics instrument scientist at the W.M. Keck Observatory, California Association for Research in Astronomy. “By next year, adaptive optics will be used to study the rich formation history of early galaxies.”

The importance of this breakthrough to worldwide astronomy was summed up by Dr. Matt Mountain, the director of the Gemini Observatory, which operates twin 8-meter telescopes, one on Mauna Kea and one on Cerro Pachon in Chile: “This is a critical milestone for all ground-based astronomy, not just for our current generation of eight to 10-meter class telescopes, but also for our dreams of 30 meter telescopes.”

The W.M. Keck Observatory is operated by the California Association for Research in Astronomy, a scientific partnership of the California Institute of Technology.