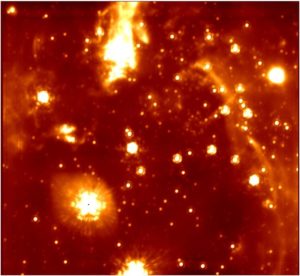 w. m. keck observatory
Narrow-field image of the Galactic Center at 3.8 microns (L prime) obtained with the Keck Laser Guide Star System on July 26, 2004. Strehl ratio at this wavelength was measured at 75%, double the previous performance at this wavelength. A Strehl ratio of 100% represents a perfect, fully-corrected image. The resolution is 82 milliarcseconds, the equivalent of being able to distinguish a pair of headlights in New York while standing in Los Angeles.

MAUNA KEA, Hawaii (September 17th, 2004) The Laser Guide Star Adaptive Optics system at the W. M. Keck Observatory is exceeding performance expectations and is poised to revolutionize many fields of astronomy. The new guide star system, the only one of its kind on a very large telescope, allows astronomers to use adaptive optics to study astronomical objects with unprecedented resolution anywhere in the night sky. The system also opens the door to wide-field imaging with adaptive optics.

“We are just thunderstruck with this new capability,” said Dr. Frederic Chaffee, director of the W. M. Keck Observatory in Hawaii. “Laser guide stars on large telescopes are a remarkable breakthrough for ground-based astronomy and we look forward to providing this astonishing capability to Keck astronomers as quickly as possible.”

The dramatic boost in telescope performance is due to a new laser system that allows adaptive optics (AO) to make precise atmospheric corrections to a scientific target. Before the laser guide star (LGS) system, Keck astronomers had to rely on the availability of a relatively bright, naturally-occurring star to measure and correct for atmospheric distortions. However, such relatively bright stars are available in only about one percent of the sky. The new astronomical laser removes these limitations and gives almost full access to the sky for study with adaptive optics.

“It is a tremendous achievement to turn one of the most technically complex prototypes in astronomy into a facility-class instrument on an operational telescope, said Dr. Peter Wizinowich, head of the Adaptive Optics group at the W. M. Keck Observatory. “It is a significant accomplishment for the team.”

Image blurring has plagued astronomy since the invention of the telescope nearly 400 years ago and has prevented ground-based astronomers from studying structural details of faint objects such as spiral arms in distant old galaxies.

“Telescopes in space and on the ground have analyzed the light from galaxies for years, but now we can actually see the structure and stellar population inside those galaxies,” said Dr. David Le Mignant, instrument scientist for the adaptive optics system at the W. M. Keck Observatory. “It is as if the Keck telescope were in space!”

With the atmospheric blurring removed by the Keck adaptive optics system, and the large diameter of a 10-meter mirror, the Keck II telescope is now more powerful than even the largest space-based telescope for looking at the cosmos in the near infrared.

“Keck’s achievement in bringing this new technology to fruition marks nothing less than a renaissance in ground based infrared astronomy, equivalent to the day Galileo first turned his telescope to look at the night sky,” said Dr. Matt Mountain, director of the Gemini Observatory, which operates twin 8-meter telescopes. “A profound impact of these results is that it can enable a whole new class of extremely large 30 meter to 100 meter telescopes to obtain diffraction-limited images from the ground.”

Studying the center of our home galaxy, the Milky Way, is another of the key scientific drivers for developing adaptive optics systems and improving their performance. “The center of our galaxy is a very difficult region to study from Hawaii because it rises only about 44 degrees above the horizon,” said Dr. Antonin Bouchez, adaptive optics researcher at the W. M. Keck Observatory. “The Galactic Center is also a region in the sky heavily obscured by interstellar dust, and only a few dim stars are available in that area for us to use as reference stars to guide the adaptive optics system.”

Despite these observing difficulties, which limited the ability to correct the image blur, astronomers were previously able to use a guide star 30 arcseconds away from the Galactic Center to study the motion of individual stars in the very central region. This work helped confirm the presence of a massive black hole at the center of our galaxy.

“With the laser guide star, we can place a far brighter reference star right on top of the black hole and suddenly we’ve removed that 30 arcsecond penalty,” added Dr. Bouchez.

The new guide star images show many more point sources in the central region of the Galactic Center, and these stars are much better resolved (Figure 1). Now, the black hole at the center of our galaxy is easy to distinguish from other sources, even allowing scientists to witness a giant flare as plasma material fell into the black hole. (Figure 2). The new system can also be used to generate large, panoramic views of the sky because it creates its own reference star in any given field. For the Galactic Center, AO-corrected images over a large field of view (80 arcseconds) were assembled to study stars within five light years of the central black hole region (Figure 3).

“Past studies have shown that several of the stars orbiting the black hole seem surprisingly young, yet this is a paradox because stars cannot be born in such a violent, turbulent region,” said Andrea Ghez, head of the Galactic Center group and professor of physics and astronomy at the University of California, Los Angeles. “This wide-field image lets us study how the young and old stars are distributed in relation to their position to the black hole. With the laser guide star, we can do this on a much larger scale than before.”

The laser guide star adaptive optics system was funded by the W. M. Keck Foundation. The artificial laser guide star system was developed and integrated in a partnership between the Lawrence Livermore National Labs (LLNL) and the W. M. Keck Observatory. The laser was integrated at Keck with the help of Dee Pennington, Curtis Brown and Pam Danforth.

The NIRC2 near-infrared camera was developed by CalTech, UCLA and the W. M. Keck observatory (P.I. Keith Matthew from CalTech). The W. M. Keck Observatory is managed by the California Association for Research in Astronomy (CARA), a non-profit 501 (c) 3 corporation whose board of directors includes members from the California Institute of Technology, the University of California and the National Aeronautics and Space Administration (NASA). For more information and accompanying figures, please visit www.keckobservatory.org. 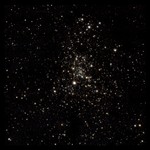 Credit: W. M. Keck Observatory
A wide-field image of the Galactic Center region. This image is 80 arcseconds wide and combines expsoures taken at 3.8 and 2.1 microns. Click the image to enlarge.