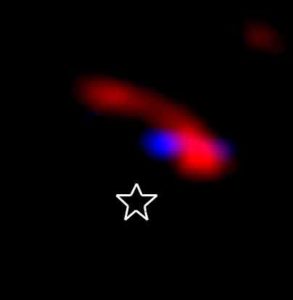 lkca 15
An expanded view of the central part of the cleared region around LkCa 15, showing a composite of two reconstructed images (blue: 2.1 microns, from November 2010; red: 3.7 microns) for LkCa 15. The location of the central star is also marked. CREDIT: KRAUS & IRELAND, 2011

Using Subaru Telescope and W. M. Keck Observatory, the team obtained and analyzed data for an infant Sun-like star named LkCa 15. Previous studies using an advanced interferometry method had inferred that three infant planets were orbiting this star. However, for this method, determining exactly how much light comes from a planet versus other sources like a disk can be particularly difficult. New Subaru and Keck Observatory data appear to solve this mystery; most of the light thought to come from the three candidate planets appears to originate from a disk of gas and dust.

“LkCa 15 is a highly complex system,” said Thayne Currie, lead author of the study and astrophysicist at NASA-Ames Research Center and the Subaru Telescope. “Prior to analyzing our Keck & Subaru data and given the same prior aperture masking data, we also would have concluded that LkCa 15 has three detected superjovian planets.”

The team’s results will soon be published in The Astrophysical Journal Letters; a preprint is available here: https://arxiv.org/abs/1905.04322 .

LkCa 15 is surrounded by a massive protoplanetary disk made of gas and dust, which are the building blocks of planets. Early analysis of this disk showed it has a large cavity depleted of dust – a tell-tale sign that much of the disk material has already been incorporated into massive, developing planetary embryos, or “protoplanets.” While the study rules out very bright superjovian planets, Currie says it is likely that fainter, less massive planets may be in the LkCa 15 system: perhaps those like Jupiter and Saturn.

“The planets in this infant solar system could actually be a lot more like our own solar system than previously thought.  They are certainly there somewhere, possibly embedded in the disk. We will keep trying to find them,” said Currie.

The team also obtained a ‘before-and-after’ view of the system by accessing the Keck Observatory Archive (KOA) to find NIRC2 data taken for LkCa 15 from 2009 – over eight years before the most recent SCExAO/CHARIS and NIRC2 images. KOA is a publicly accessible repository of all the high-value data obtained at the Observatory and is operated by Keck Observatory in partnership with the NASA Exoplanet Science Institute (NExScI) at Caltech.

The combined data showed that most of the light surrounding LkCa 15 originates from an extended arc-like structure – the visible edge of another component of LkCa 15’s disk. This arc has the same brightness previously attributed to planets around LkCa 15.

The nearly decade-old KOA data for LkCa 15 play a unique role in understanding this planetary system.  When compared with new Keck Observatory and Subaru Telescope data, the KOA data also showed that light emitted from LkCa 15’s arc-like structure is static over the course of eight years.

“This is consistent with a fixed, disk-like structure. Without the KOA, we would not have been able to know this key fact,” said Currie.

“It’s great to see this new data from Keck and Subaru combined with data from the KOA,” said John O’Meara, chief scientist at Keck Observatory. “This result shows the importance of the KOA, and is a great demonstration of how new discoveries can be made with ‘old’ data.”

The team will continue its search for protoplanets in LkCa 15, as it is widely regarded as a superb laboratory for studying planet formation. Though finding these obscured planets and separating their light from LkCa 15’s disk will be challenging, there is a clear path forward.

Recently, Keck Observatory has substantially improved the planet imaging capability of NIRC2 as a part of the Keck Planet Imager and Characterizer (KPIC) project. The system was outfitted with a new camera to better sharpen images of red, faint, distant stars like LkCa 15 and coronagraphs to better block the glare of starlight that prevents us from easily seeing planets.

Similarly, SCExAO is also being further upgraded with additional cameras to better identify fainter planets close to their stars. These enhancements could allow KPIC and SCExAO to see faint Jupiter-like planets on Saturn-like orbits moving against the background of LkCa 15’s disk.

Further in the future, a successor to SCExAO and KPIC on the upcoming Thirty Meter Telescope on Maunakea – the Planetary Systems Imager – could image and characterize even lower-mass, fainter planets around LkCa 15 on Mars-to-Jupiter like orbits.

State-of-the-art planet-imaging instruments like SCExAO and KPIC “open the door to better understanding the origin and evolution of planetary systems, and whether our own solar system’s history is common or rare,” said Motohide Tamura, the Director of the Astrobiology Center of National Institutes of Natural Sciences in Japan and coauthor of this study.