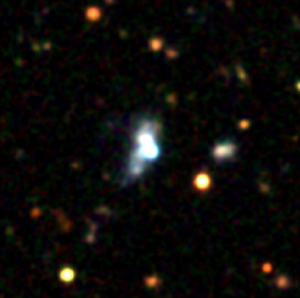 Maunakea, Hawaii – Astronomers using two Maunakea Observatories – Subaru Telescope and W. M. Keck Observatory – combined with the power of machine learning, have discovered a nearby galaxy that has broken the record for having the lowest level of oxygen ever seen. The researchers measured its oxygen abundance at only 1.6 percent that of the Sun, suggesting the galaxy, named HSC J1631+4426, only recently started making stars.

The study will be published in the August 3, 2020 issue of The Astrophysical Journal and is available in preprint format on arXiv.org.

Young galaxies like HSC J1631+4426 are rare; most galaxies in the modern universe are already mature. Standard Cosmology predicts there may still be a few star-forming galaxies today, but they are difficult to detect.

“To find these very faint, rare galaxies, deep, wide-field imaging data taken with the Subaru Telescope was indispensable,” said Takashi Kojima of the University of Tokyo Institute for Cosmic Ray Research and lead author of the study.

However, the wide-field data detected 40 million objects. To comb through the vast amount of data and zero in on galaxies that are just beginning to form stars, the research team developed a new machine learning method. They ‘taught’ a computer to repeatedly learn the galaxy colors expected from theoretical models and select only galaxies in the early stage of galaxy formation. 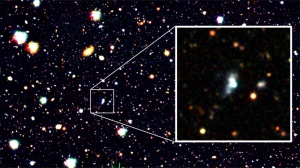 AN IMAGE OF HSC J1631+4426, AN EXTREMELY METAL-POOR NEARBY GALAXY THAT BROKE THE RECORD FOR HAVING THE LOWEST OXYGEN ABUNDANCE. Credit: NAOJ/Kojima et al.

The spectroscopic data revealed that one of them, HSC J1631+4426, is an extremely metal-poor galaxy with the lowest oxygen abundance ever reported. The researchers also determined its location to be relatively close – just 430 million light-years away in the constellation Hercules – and that the galaxy is tiny.

“What’s surprising is the stellar mass of the HSC J1631+4426 galaxy is very small, 0.8 million solar masses, which is only about 1/100,000 of our Milky Way, and comparable to the mass of a star cluster in our galaxy,” said co-author Masami Ouchi, a professor at the National Astronomical Observatory of Japan and the University of Tokyo.

“Low-mass, young, metal-poor galaxies found near us are important because they resemble primordial galaxies, making HSC J1631+4426 one of the best local labs for studying in detail what the first galaxies were like in the early universe, shortly after the Big Bang,” said John O’Meara, chief scientist at Keck Observatory.

The Big Bang created two main elements: hydrogen and helium. As such, the earliest galaxies are expected to have few ‘metals’ like oxygen (in astronomy, elements heavier than hydrogen and helium are called ‘metals’). Oxygen-poor galaxies found today serve as analogs for galaxies born shortly after the Big Bang, thus helping astronomers better understand how galaxies formed and evolved in the early universe.

The research team finds two interesting indications from the discovery of HSC J1631+4426. First, it provides evidence supporting the Standard Cosmology prediction that young, star-forming galaxies do in fact exist in the present universe.

Second, the study indicates this could be the latest epoch of the cosmic history where we may witness a newborn galaxy. The Standard Cosmology suggests the density of matter drops as the expansion of the universe accelerates. This would lead to a future universe where matter does not assemble by gravity, and new galaxies won’t be born. Thus, HSC J1631+4426 may be the last generation galaxy of its kind in the long cosmic history.