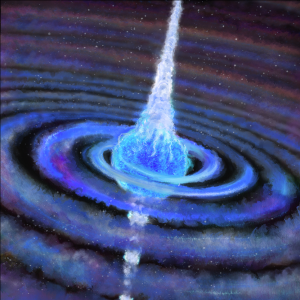 this illustration shows a massive star that is about to explode. the explosion was triggered after its dead-star companion (a black hole or neutron star) plunged into the star's core. scientists say that the black hole or neutron star rammed into the massive star, and then, as it traveled inward over the course of centuries, ejected a spiral of material from the star's atmosphere (pictured surrounding the star). when it reached the star's core, material from the core rapidly fell onto the stellar corpse and this led to the launching of a pair of jets at nearly the speed of light. in this artist's depiction, the jets are shown tunneling through the star, and will soon set off the supernova explosion. after a few years, the supernova will crash through the bulk of the ejected spiral, which extends to about 10,000 times the size of the star. this will create the luminous transient radio source observed by the very large array.
Credit: Chuck Carter

Maunakea, Hawaiʻi – In 2017, a particularly luminous and unusual source of radio waves was discovered in data taken by the Very Large Array (VLA) Sky Survey, a project that scans the night sky in radio wavelengths. Now, led by Caltech graduate student Dillon Dong, a team of astronomers has established that the bright radio flare was caused by a black hole or neutron star crashing into its companion star in a never-before-seen process.

“Massive stars usually explode as supernovae when they run out of nuclear fuel,” says Gregg Hallinan, professor of astronomy at Caltech. “But in this case, an invading black hole or neutron star has prematurely triggered its companion star to explode.” This is the first time a merger-triggered supernova has ever been confirmed.

A paper about the findings, which includes data from W. M. Keck Observatory on Maunakea in Hawaiʻi, appears in the journal Science on September 3.

Bright Flares in the Night Sky

Hallinan and his team look for so-called radio transients—short-lived sources of radio waves that flare brightly and burn out quickly like a match lit in a dark room. Radio transients are an excellent way to identify unusual astronomical events, such as massive stars that explode and blast out energetic jets or the mergers of neutron stars.

Using Keck Observatory’s Low Resolution Imaging Spectrometer (LRIS), the team then made follow-up optical observations of the radio source’s home galaxy and discovered a massive outflow of material ejected from a central location, suggesting there was an energetic explosion of a massive star.

As Dong sifted through the VLA’s massive dataset, he singled out an extremely luminous source of radio waves from the VLA survey called VT 1210+4956. This source is tied for the brightest radio transient ever associated with a supernova.

Dong determined that the bright radio energy was originally a star surrounded by a thick and dense shell of gas. This gas shell had been cast off the star a few hundred years before the present day. VT 1210+4956, the radio transient, occurred when the star finally exploded in a supernova and the material ejected from the explosion interacted with the gas shell. Yet, the gas shell itself, and the timescale on which it was cast off from the star, were unusual, so Dong suspected that there might be more to the story of this explosion. 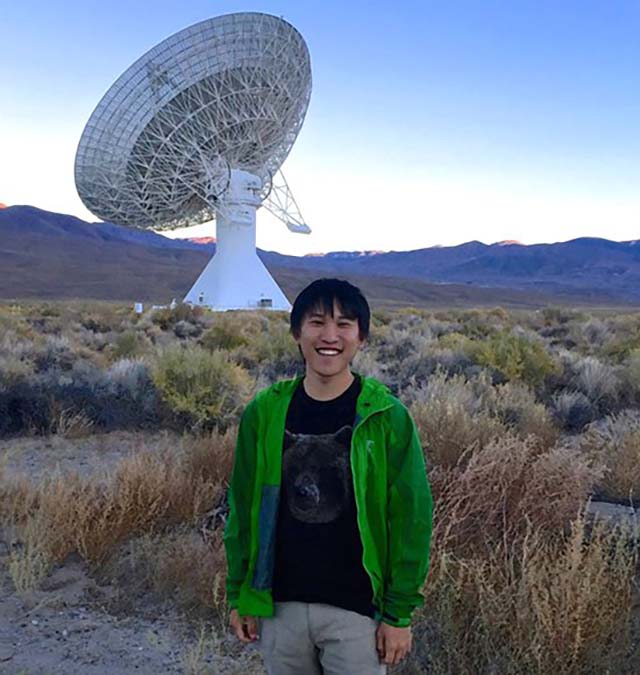 Following Dong’s discovery, Caltech graduate student Anna Ho (PhD ’20) suggested that this radio transient be compared with a different catalog of brief bright events in the X-ray spectrum. Some of these X-ray events were so short-lived that they were only present in the sky for a few seconds of Earth time. By examining this other catalog, Dong discovered a source of X-rays that originated from the same spot in the sky as VT 1210+4956. Through careful analysis, Dong established that the X-rays and the radio waves were likely coming from the same event.

“The X-ray transient was an unusual event—it signaled that a relativistic jet was launched at the time of the explosion,” says Dong. “And the luminous radio glow indicated that the material from that explosion later crashed into a massive torus of dense gas that had been ejected from the star centuries earlier. These two events have never been associated with each other, and on their own they’re very rare.”

So, what happened? After careful modeling, the team determined the most likely explanation—an event that involved some of the same cosmic players that are known to generate gravitational waves.

They speculated that a leftover compact remnant of a star that had previously exploded—that is, a black hole or a neutron star—had been closely orbiting around a star. Over time, the black hole had begun siphoning away the atmosphere of its companion star and ejecting it into space, forming the torus of gas. This process dragged the two objects ever closer until the black hole plunged into the star, causing the star to collapse and explode as a supernova.

The X-rays were produced by a jet launched from the core of the star at the moment of its collapse. The radio waves, by contrast, were produced years later as the exploding star reached the torus of gas that had been ejected by the inspiraling compact object. 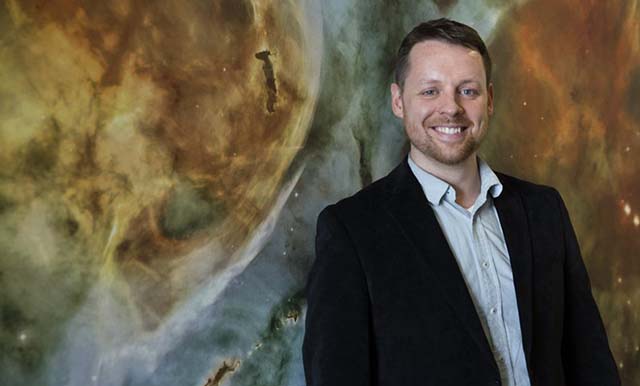 Astronomers know that a massive star and a companion compact object can form what is called a stable orbit, in which the two bodies gradually spiral closer and closer over an extremely long period of time. This process forms a binary system that is stable for millions to billions of years but that will eventually collide and emit the kind of gravitational waves that were discovered by LIGO in 2015 and 2017.

However, in the case of VT 1210+4956, the two objects instead collided immediately and catastrophically, producing the blasts of X-rays and radio waves observed. Although collisions such as this have been predicted theoretically, VT 1210+4956 provides the first concrete evidence that it happens.

The VLA Sky Survey produces enormous amounts of data about radio signals from the night sky, but sifting through that data to discover a bright and interesting event such as VT 1210+4956 is like finding a needle in a haystack. Finding this particular needle, Dong says, was, in a way, serendipitous.

“We had ideas of what we might find in the VLA survey, but we were open to the possibility of finding things we didn’t expect,” explains Dong. “We created the conditions to discover something interesting by conducting loosely constrained, open-minded searches of large data sets and then taking into account all of the contextual clues we could assemble about the objects that we found. During this process you find yourself pulled in different directions by different explanations, and you simply let nature tell you what’s out there.”