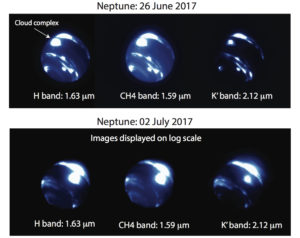 n. molter/i. de pater, uc berkeley/c. alvarez, w. m. keck observatory
Images of Neptune taken during twilight observing revealed an extremely large bright storm system near Neptune’s equator (labeled ‘cloud complex’ in the upper figure), a region where astronomers have never seen a bright cloud. The center of the storm complex is ~9,000 km across, about 3/4 the size of Earth, or 1/3 of Neptune’s radius. The storm brightened considerably between June 26 and July 2, as noted in the logarithmic scale of the images taken on July 2.

Maunakea, Hawaii – Striking images of a storm system nearly the size of Earth have astronomers doing a double-take after pinpointing its location near Neptune’s equator, a region where no bright cloud has ever been seen before.

“Seeing a storm this bright at such a low latitude is extremely surprising,” said Ned Molter, a graduate student at University of California, Berkeley, who spotted the storm complex during a test run of twilight observing at W. M. Keck Observatory on Maunakea, Hawaii. “Normally, this area is really quiet and we only see bright clouds in the mid-latitude bands, so to have such an enormous cloud sitting right at the equator is spectacular.”

This massive storm system is about 9,000 kilometers in length, or 1/3 the size of Neptune’s radius, spanning at least 30 degrees in both latitude and longitude. Molter observed it getting much brighter between June 26 and July 2. 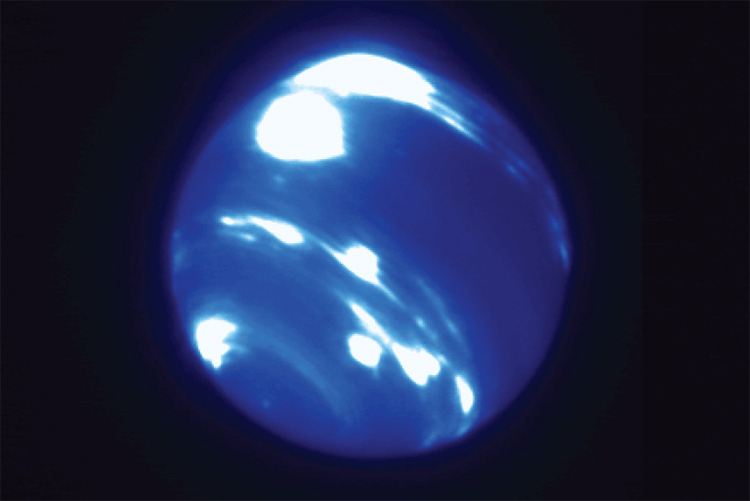 “Historically, very bright clouds have occasionally been seen on Neptune, but usually at latitudes closer to the poles, around 15 to 60 degrees north or south,” said Molter’s advisor, Professor Imke de Pater of UC Berkeley’s Astronomy Department. “Never before has a cloud been seen at, or so close to the equator, nor has one ever been this bright.” 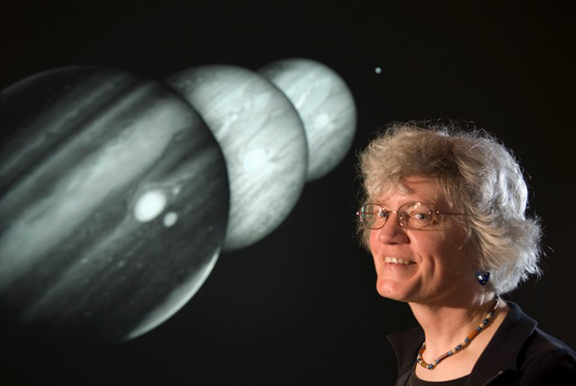 At first, de Pater (pictured to the right) thought it was the same Northern Cloud Complex seen by the Hubble Space Telescope in 1994, after the iconic Great Dark Spot, imaged by Voyager 2 in 1989, had disappeared. But de Pater says measurements of its locale do not match, signaling that this cloud complex is different from the one Hubble first saw more than two decades ago.

A huge, high-pressure, dark vortex system anchored deep in Neptune’s atmosphere may be what’s causing the colossal cloud cover. As gases rise up in a vortex, they cool down. When its temperature drops below the condensation temperature of a condensable gas, that gas condenses out and forms clouds, just like water on Earth. On Neptune we expect methane clouds to form.

As with every planet, winds in Neptune’s atmosphere vary drastically with latitude, so if there is a big bright cloud system that spans many latitudes, something must hold it together, such as a dark vortex. Otherwise, the clouds would shear apart.

“This big vortex is sitting in a region where the air, overall, is subsiding rather than rising,” said de Pater. “Moreover, a long-lasting vortex right at the equator would be hard to explain physically.”

If it is not tied to a vortex, the system may be a huge convective cloud, similar to those seen occasionally on other planets like the huge storm on Saturn that was detected in 2010. Although one would also then expect the storm to have smeared out considerably over a week’s time.

“This shows that there are extremely drastic changes in the dynamics of Neptune’s atmosphere, and perhaps this is a seasonal weather event that may happen every few decades or so,” said de Pater.

Neptune is the windiest planet in our solar system, with the fastest observed wind speeds at the equator reaching up to a violent 1000 miles per hour. To put this into perspective, a Category 5 hurricane has wind speeds of 156 miles per hour. Neptune orbits the Sun every 160 years, and one season is about 40 years.

The discovery of Neptune’s mysterious equatorial cloud complex was made possible by the Keck Visiting Scholars Program, a new program launched this summer that gives graduate students and post-doctoral researchers experience working at the telescope, while contributing to Keck Observatory and its scientific community.

“This result by Imke and her first year graduate student, Ned, is a perfect example of what we’re trying to accomplish with the Keck Visiting Scholars Program,” said Anne Kinney, chief scientist at Keck Observatory. “Ned is our first visiting scholar, and his incredible work is a testament to the value of this program. It’s just been an outrageous success.” 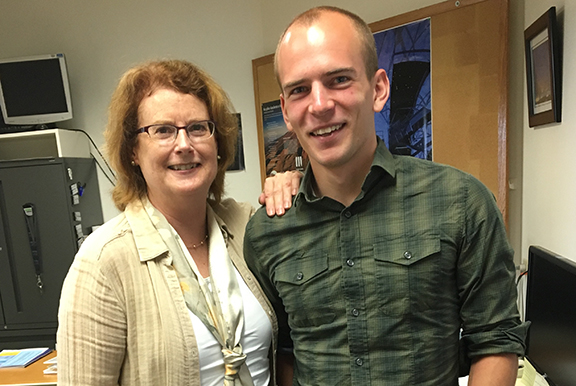 Molter (pictured to the left with Kinney) is one of eight scholars accepted into the program this year. His assignment during his six-week stay at the Observatory was to develop a more efficient method for twilight observing, making use of time that otherwise might not be used. Most observers in the Keck Observatory community peer deep into the night sky and cannot observe their targets during the ‘Twilight Zone.’

“Ned had never observed before, and he’s very bright, so when Anne told me about the program, I knew he would be the perfect student for it,” said de Pater. “Now that we’ve discovered this interesting cloud complex in Neptune, Ned has a running start on a nice paper for his PhD thesis.”

“I loved being at Keck. Everyone was extremely friendly and I had a ton of personal interaction with the support astronomers and observing assistants,” said Molter. “Being able to go behind the scenes to see how they run the telescopes and instruments every day, getting 10 nights of observing and engineering time on the telescopes, and going up to the summit twice to see the incredible engineering behind this gigantic machine has turned me from a student to an actual observer. It was an incredible opportunity.”

Molter and De Pater will continue to analyze their data and propose for more twilight observing time at Keck Observatory this fall so they can learn more about the nature of this storm and get an idea of what it will be doing over time.

Having a better understanding of Neptune’s atmosphere will help give astronomers a clearer picture of this icy giant’s global circulation. This has become increasingly more important in the exoplanet realm, as a majority of exoplanets found so far are nearly the size of Neptune. While scientists can calculate their size and mass, not much is currently known about exoplanets’ atmosphere.

The W. M. Keck Observatory operates the most scientifically productive telescopes on Earth. The two, 10-meter optical/infrared telescopes on the summit of Maunakea on the Island of Hawaii feature a suite of advanced instruments including imagers, multi-object spectrographs, high-resolution spectrographs, integral-field spectrometers, and world-leading laser guide star adaptive optics systems. The Observatory is a private 501(c) 3 non-profit organization and a scientific partnership of the California Institute of Technology, the University of California, and NASA.