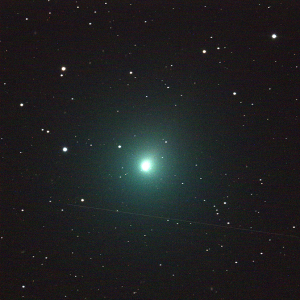 Maunakea, Hawaii – Astronomers are being treated to an exciting view of Comet 46P/Wirtanen at W. M. Keck Observatory, with sharper-than-ever data images of this icy and rocky space visitor.

A group of comet scientists led by Boncho Bonev, Physics Research Assistant Professor at American University, just completed their two-night observation of the comet as it made its long-anticipated closest approach to Earth.

“It is very exciting because the comet is so close and sufficiently bright for detailed astronomical studies,” said Bonev. “Comet Wirtanen is only 30 lunar distances from our planet, meaning that it is about 30 times the distance to the moon. That is nothing compared to the vast distances astronomers typically work with.”

NASA awarded Bonev’s team telescope time on Sunday and Monday, December 16-17, at Keck Observatory to study Comet Wirtanen. The researchers used the Observatory’s Near-Infrared Spectrograph (NIRSPEC) for the first time on a comet since this powerful instrument’s recent major upgrade. 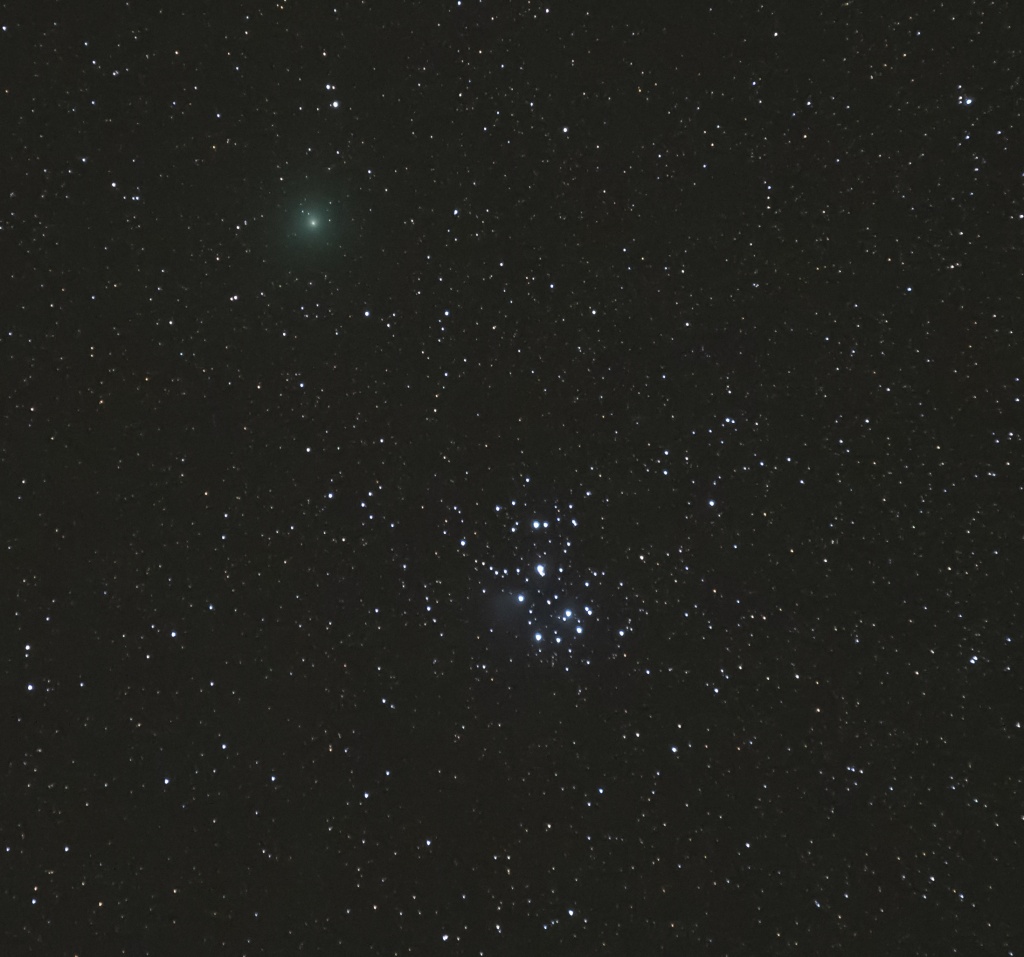 Comet 46P/Wirtanen, pictured here in the upper-left near the Pleiades, a star cluster in the constellation Taurus, is nicknamed the ‘Christmas Comet’ due to its fuzzy, bright green glow and the timing of its holiday flyby. 46P/Wirtanen made its closest approach on Sunday, December 16, at just 7.1 million miles from Earth. This is the closest the comet has come to our planet in centuries. CREDIT: BARBARA SCHAEFER

“In the two decades since we delivered NIRSPEC to Keck Observatory in 1999, the technology for digital infrared cameras has greatly improved,” said UCLA Physics and Astronomy Distinguished Professor Ian McLean, the original principal investigator who was instrumental in commissioning NIRSPEC at Keck Observatory in 1999. “So we installed more sensitive detectors, replacing the digital imaging devices, along with other mechanisms and optics, with brand new ones to give the instrument a new lease of life.”

“It’s very sensitive. The new detector will allow us to see about an order of magnitude fainter objects in the sky,” said NIRSPEC Instrument Master Greg Doppmann, an astronomer at Keck Observatory. “It has the new Hawaii 2RG Teledyne chip so it has more pixels – the pixels are smaller and they’re much more sensitive – which means much more improvement in the results we get when we operate NIRSPEC on the telescope.”

“We’re excited about the NIRSPEC upgrade,” said Keck Observatory Chief Scientist John O’Meara. “It’s going to produce amazing gains in efficiency. You can look at many more objects or get better data for the same amount of time on the sky. It’s like doubling the gas mileage on your car.” 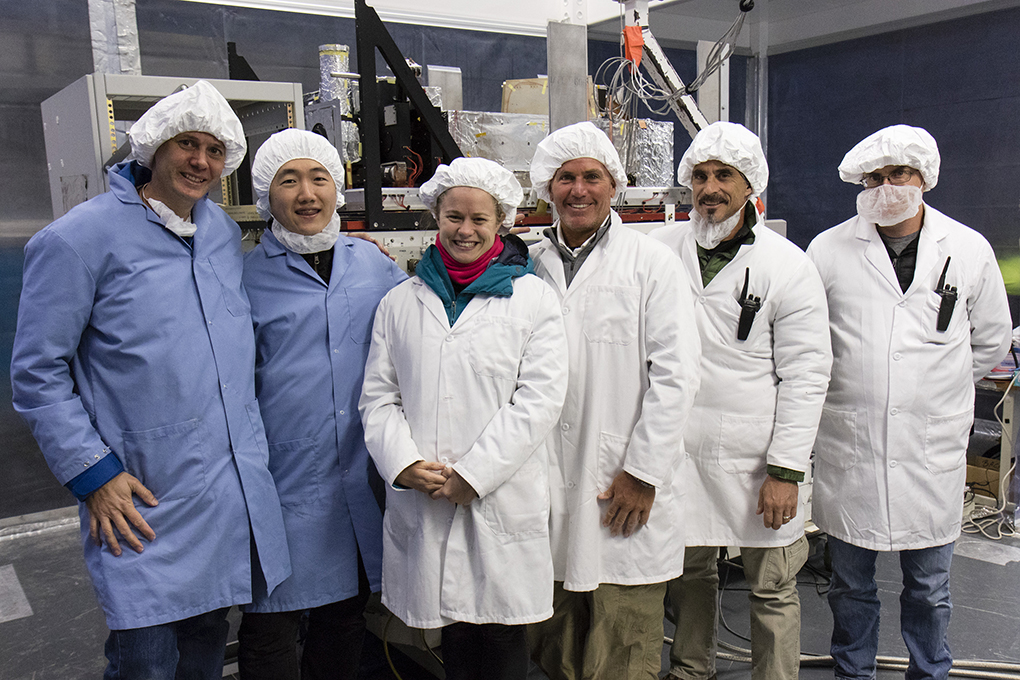 The improvements were specifically completed in time for the comet’s historic flyby. Within just the first scan, the researchers successfully captured spectra of Comet Wirtanen, marking first science for the new NIRSPEC.

“This comet passage is particularly important because of its proximity to the Earth as it passes,” said UCLA Physics and Astronomy Associate Professor Michael Fitzgerald, the principal investigator of the NIRSPEC upgrade. “Comets are relics of the solar system; this should allow us to get a detailed understanding of the chemical make-up of this building block of the solar system, and ultimately paint a picture of how planetary systems came to be.”

“I’m really excited that NIRSPEC is already being used for such a critical science mission designed to meet one of NASA’s science goals,” said NIRSPEC Instrument Scientist and Keck Visiting Scholar Emily Martin, now a National Science Foundation postdoctoral fellow at the University of California, Santa Cruz. “It’s possible that we’ll see exotic molecular species that have never been observed on a comet before, and this is only possible because we upgraded NIRSPEC.” 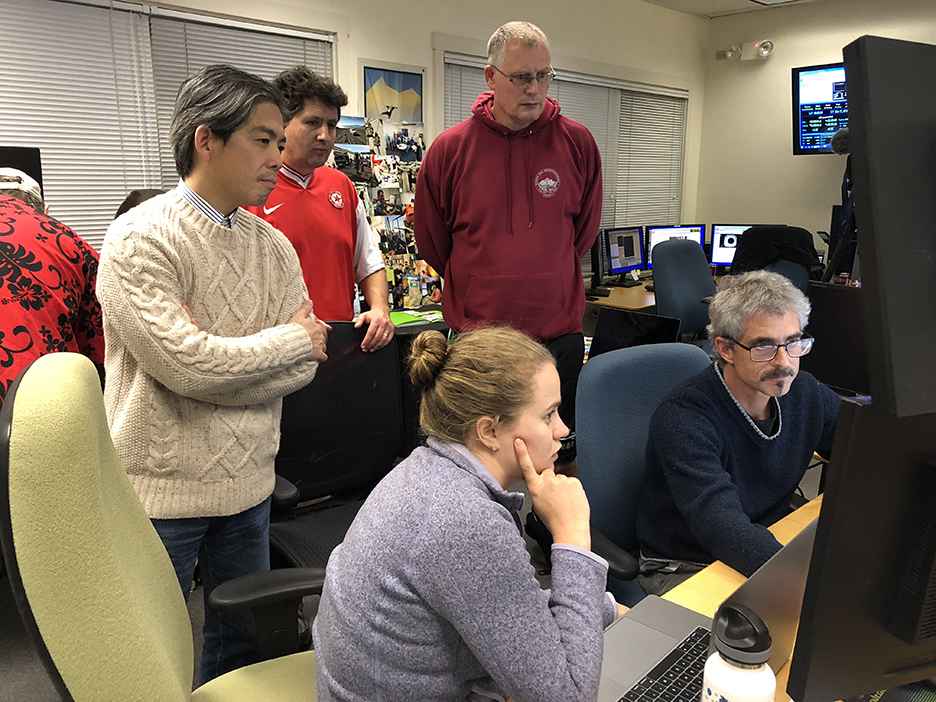 Bonev’s team is specifically looking for what are called prebiotic molecules, such as water, ammonia, hydrocarbons, and other organic compounds that are precursor ingredients to forming life.

“We’re so thankful to the NIRSPEC team for their hard work in making the upgrades a reality for us. This allows us to search for these key molecules, which ultimately helps us find answers to our origins,” said Bonev. “Though our goal is to characterize Comet Wirtanen’s chemical composition, there is always the possibility to see something unexpected or discover something new that will raise new questions to address. That’s what makes science so exciting!” 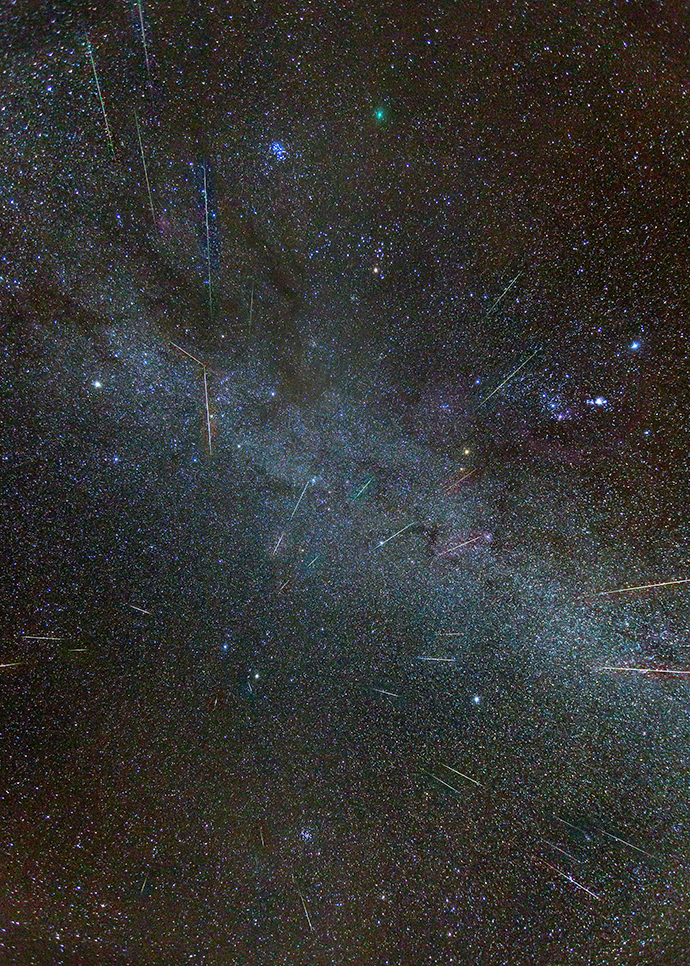 The Near-Infrared Spectrograph (NIRSPEC) is a unique, cross-dispersed echelle spectrograph that captures spectra of objects over a large range of infrared wavelengths at high spectral resolution. Built at the UCLA Infrared Laboratory by a team led by Prof. Ian McLean, the instrument is used for radial velocity studies of cool stars, abundance measurements of stars and their environs, planetary science, and many other scientific programs. A second mode provides low spectral resolution but high sensitivity and is popular for studies of distant galaxies and very cool low-mass stars. NIRSPEC can also be used with Keck II’s adaptive optics (AO) system to combine the powers of the high spatial resolution of AO with the high spectral resolution of NIRSPEC. Support for this project was provided by the National Science Foundation, University of California, and the Heising-Simons Foundation.

The W. M. Keck Observatory telescopes are the most scientifically productive on Earth. The two, 10-meter optical/infrared telescopes atop Maunakea on the Island of Hawaii feature a suite of advanced instruments including imagers, multi-object spectrographs, high-resolution spectrographs, integral-field spectrometers, and world-leading laser guide star adaptive optics systems. The data presented herein were obtained at Keck Observatory, which is a private 501(c) 3 non-profit organization operated as a scientific partnership among the California Institute of Technology, the University of California, and the National Aeronautics and Space Administration. The Observatory was made possible by the generous financial support of the W. M. Keck Foundation. The authors recognize and acknowledge the very significant cultural role and reverence that the summit of Maunakea has always had within the Native Hawaiian community. We are most fortunate to have the opportunity to conduct observations from this mountain.