Researchers Solve Mystery at the Center of the Milky Way 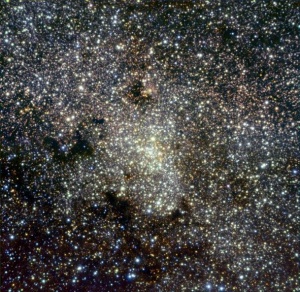 Astronomers from Lund University in Sweden have now found the explanation to a recent mystery at the center of the Milky Way galaxy: the high levels of scandium discovered last spring near the galaxy’s giant black hole were in fact an optical illusion.

Maunakea, Hawaii – Last spring, researchers published a study about the apparent presence of astonishing and dramatically high levels of three different elements in red giant stars, located less than three light years away from the supermassive black hole at the center of our galaxy.

Various possible explanations were presented, for example that the high levels were a result of earlier stars being disrupted as they fall into the black hole, or a result of debris from the collisions of neutron stars.

Now another group of astronomers from Lund University among others, in collaboration with UCLA in California, have found an explanation for the high levels of scandium, vanadium and yttrium.

They argue that the so-called spectral lines presented last spring were actually an optical illusion. Spectral lines are used to find out which elements a star contains – by using its own light.

“These giant red stars have used up most of their hydrogen fuel and their temperatures are therefore only half of the sun’s,” says Brian Thorsbro, lead author of the study and doctoral student in astronomy at Lund University.

The results were recently published in The Astrophysical Journal.

These results followed another Keck Observatory study conducted by the same team in late 2017 that showed the abundance of iron in the Nuclear Star Cluster is not extremely high, as previous studies had suggested.

“The abundance of iron in these stars, only a few light years from the Milky Way’s black hole, is no more than three times what is seen in the Sun,” says UCLA astronomer R. Michael Rich, who led the 2017 study along with Lund University astronomer Nils Ryde. “Most are similar to those stars in the central bulge of our galaxy, only 1-2 times the sun’s iron abundance.”

According to the new study, the lower temperatures of the giant stars helped to create the optical illusion that appeared in the measurements of spectral lines.

Specifically, it means that the electrons in the elements behave differently at different temperatures, which in turn can be misleading when measuring the spectral lines of elements in different stars.

The conclusion is the result of a close collaboration between astronomers and atomic physicists.

Thorsbro and his colleagues have had the world’s largest telescope, at the W. M. Keck Observatory on Maunakea, Hawaii, at their disposal, thanks to their collaboration with Rich.

Using the Near-Infrared Spectrograph (NIRSPEC) on the Keck II telescope, the research team is currently conducting a comprehensive mapping of the central areas of the Milky Way, exploring the spectral lines in the light from different stars to find out which elements they contain.

The purpose is to gain an understanding of the events that have occurred in the history of the Milky Way, but also to understand how galaxies in general have formed.

“Our research collaboration is world-leading in terms of systematically mapping the elements contained in the huge central star cluster – the star cluster that surrounds the black hole,” says Ryde.

The spectral lines for different elements are recorded in a high-resolution spectrometer – an advanced camera that generates a rainbow of the starlight.

The research team has studied the part of the spectrum consisting of near-infrared light, i.e. the heat radiation emitted by the stars.

The reason for this is that infrared light can penetrate the dust that obstructs the line-of-sight between us and the center of the Milky Way, approximately 25,000 light years away. The technology for recording this light is very advanced, and has only recently become available to astronomers.

“We have only started to map the stellar compositions in these central areas of the Milky Way,” says Ryde.

ABOUT NIRSPEC
The Near-Infrared Spectrograph (NIRSPEC) is a unique, cross-dispersed echelle spectrograph that captures spectra of objects over a large range of infrared wavelengths at high spectral resolution. Built at the UCLA Infrared Laboratory by a team led by Prof. Ian McLean, the instrument is used for radial velocity studies of cool stars, abundance measurements of stars and their environs, planetary science, and many other scientific programs. A second mode provides low spectral resolution but high sensitivity and is popular for studies of distant galaxies and very cool low-mass stars. NIRSPEC can also be used with Keck II’s adaptive optics (AO) system to combine the powers of the high spatial resolution of AO with the high spectral resolution of NIRSPEC. Support for this project was provided by the Heising-Simons Foundation.

ABOUT W. M. KECK OBSERVATORY
The W. M. Keck Observatory telescopes are the most scientifically productive ground-based telescopes on Earth. The two, 10-meter optical/infrared telescopes atop Maunakea on the Island of Hawaii feature a suite of advanced instruments including imagers, multi-object spectrographs, high-resolution spectrographs, integral-field spectrometers, and world-leading laser guide star adaptive optics systems. The data presented herein were obtained at Keck Observatory, which is a private 501(c) 3 non-profit organization operated as a scientific partnership among the California Institute of Technology, the University of California, and the National Aeronautics and Space Administration. The Observatory was made possible by the generous financial support of the W. M. Keck Foundation. The authors recognize and acknowledge the very significant cultural role and reverence that the summit of Maunakea has always had within the Native Hawaiian community. We are most fortunate to have the opportunity to conduct observations from this mountain.