Possible new type of Supernovae puts Calcium in your Bones 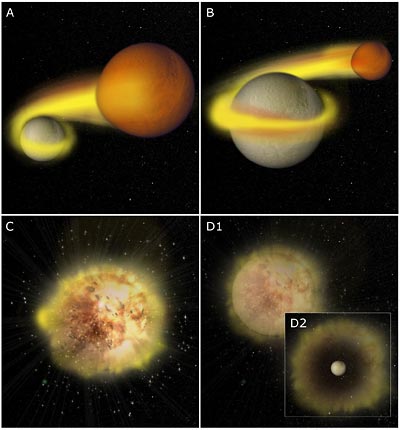 One theory of this new exploding system, shown in the simulation images (above), is that a white dwarf steals helium from a companion until the mass thief becomes very hot and dense and a nuclear explosion occurs. The helium is transformed into elements such as calcium and titanium, eventually producing the building blocks of life for future generations of stars. Credit: Avishay Gal-Yam, Weizmann Institute of Science.

New data from several telescopes, including the W. M. Keck Observatory, suggest astronomers may have identified a new type of supernovae. The stellar death is thought to have originated in a star that was a low-mass white dwarf accumulating helium from a companion star. When the white dwarf exploded, about half of the mass ejected from the supernova was in the form of calcium.

The finding suggests that a couple of supernovae like this exploding every 100 years would produce the high abundance of calcium observed in galaxies like the Milky Way, and the calcium present in life on Earth.

The supernova, SN 2005E, was discovered five years ago by the University of California, Berkeley’s Katzman Automatic Imaging Telescope (KAIT), and is one of only eight known “calcium-rich supernovae” that appear to be distinct from the two main classes of supernovae: the Type Ia supernovae, thought to be old, white dwarf stars that accrete matter from a companion until they undergo a thermonuclear explosion that blows them apart entirely; and Type Ib/c or Type II supernovae, thought to be hot, massive and short-lived stars that explode and leave behind black holes or neutron stars.

In the past decade, robotic telescopes have turned astronomers’ attention to scads of strange exploding stars, one-offs that may or may not point to new and unusual physics. “With the sheer numbers of supernovae we’re detecting, we’re discovering weird ones that may represent different physical mechanisms compared with the two well-known types, or may just be variations on the standard themes,” said Alex Filippenko, KAIT director and UC Berkeley professor of astronomy. “But SN 2005E was a different kind of ‘bang.’ It and the other calcium-rich supernovae may be a true suborder, not just one of a kind.”

Filippenko is coauthor of a paper appearing in the May 20 issue of the journal Nature describing SN 2005E and presenting evidence that the original star was a low-mass white dwarf stealing helium from a binary companion until the temperature and pressure ignited a thermonuclear explosion – a massive fusion bomb – that blew off at least the outer layers of the star and perhaps blew the entire star to smithereens. The team of astronomers was led by Hagai Perets, now at the Harvard-Smithsonian Center for Astrophysics, and Avishay Gal-Yam of the Weizmann Institute of Science in Rehovot, Israel.