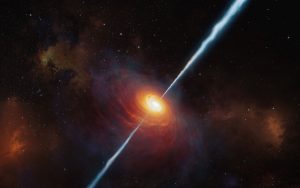 this artist’s impression shows how the distant quasar p172+18 and its radio jets may have looked. to date (early 2021), this is the most distant quasar with radio jets ever found. it is so distant that light from it has travelled for about 13 billion years to reach us: we see it as it was when the universe was only about 780 million years old.
Credit: ESO/M. Kornmesser

Maunakea, Hawaii – An international team of astronomers has pinpointed the most distant radio-bright quasar known so far.

Using various telescopes around the world, including W. M. Keck Observatory on Maunakea in Hawaii, the research team led by the Max Planck Institute for Astronomy and the European Southern Observatory has discovered the quasar, named P172+18, dates back to when the universe was just 780 million years old – about 100 million years earlier than the previous record holder.

The study is published in The Astrophysical Journal.

Based on high-precision observations from several infrared telescopes, including data captured using Keck Observatory’s Near Infrared Echellette Spectrograph (NIRES), the researchers calculated the quasar’s distance at a redshift of z = 6.82. The data also revealed that P172+18 is one of the fastest-growing supermassive black holes known to date, emitting about 580 times as much energy as the entire Milky Way. 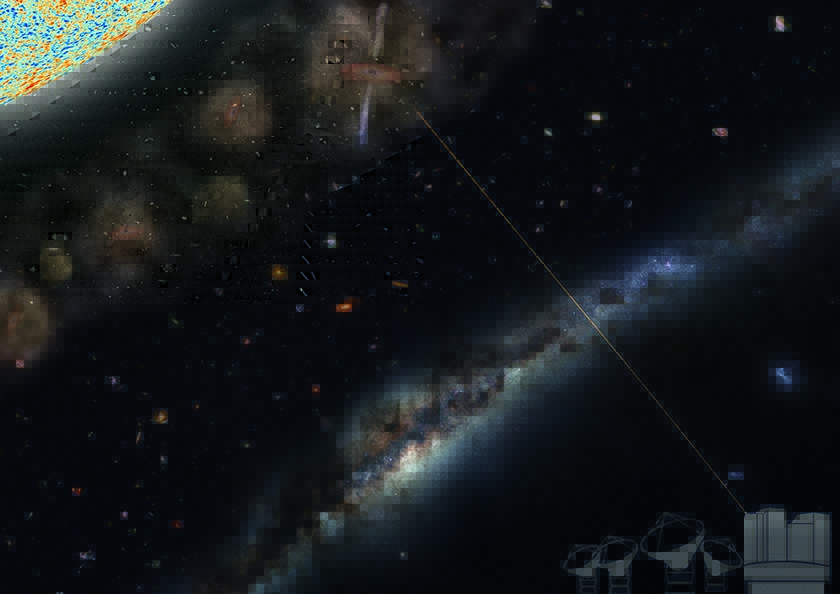 The illustration depicts observations of the most distant radio-source currently known, the quasar P172+18. Telescopes see it just 780 million years after the Big Bang. The radiation emitted by quasars during the first hundreds of millions of years after the Big Bang helps astronomers investigate the matter in the foreground. Using the radio wave emission of radio-loud quasars with jets like P172+18 as background sources, astronomers can study the distribution of neutral hydrogen gas clouds in the early universe. Those clouds may be the precursors to galaxies and help probe early galaxy formation and clustering depending on cosmic age. Credit: MPIA Graphics Department

Quasars are among the most luminous objects in the universe, powered by supermassive black holes feeding on material at the centers of distant galaxies. Only 10 percent of known quasars are radio-loud, meaning that they shine exceptionally bright at radio frequencies. Only three radio-loud quasars with redshifts of z = 6 or more were known, until now.

Such distant radio-loud quasars are essential for studying the formation and evolution of massive galaxies and black holes in the young universe.