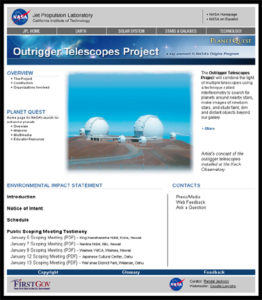 WASHINGTON, D. C. (August 5th, 2005) NASA has released its Record of Decision concerning the Outrigger Telescopes Project, selecting the W.M. Keck Observatory on Mauna Kea as the site for the project.

In its decision, NASA states: “No alternate site matches the scientific capability of the W. M. Keck Observatory on Mauna Kea, which hosts the world’s two largest and most powerful telescopes. The W.M. Keck Observatory is found to offer the highest overall scientific potential, as well as the lowest technical and programmatic risk.”

NASA retains the option of going to an alternative site if, for any reason, the project is unable to proceed at Mauna Kea. Assuming that the Outrigger Telescopes Project does come to Mauna Kea, NASA will ensure that all mitigation and monitoring measures detailed in the Final Environmental Impact Statement (FEIS) will be carried out. Among these measures is a commitment to fund a $2 million initiative directed to the preservation and protection of historic and cultural resources on Mauna Kea and to the educational needs of Hawaiians. The FEIS also contains an extensive set of mitigation measures to protect the Wekiu bug, a candidate for listing as an endangered species. Among these are commitments to avoid construction impacts, restore previously damaged habitat, monitor Wekiu bug activity, and fund a study of the bug’s life cycle and environmental requirements.

In its decision, NASA also states that it will ensure compliance with conditions imposed on the project through the State of Hawaii permitting and approval process.

In commenting on NASA’s decision, Rolf Kudritzki, Director of the University of Hawaii Institute for Astronomy stated that he was “extremely pleased that NASA has selected Mauna Kea, the scientifically superior site, for the Outrigger Project. NASA has made this decision based on the extensive studies and consultations that were carried out for the EIS”.

The Outrigger Telescopes Project is still being reviewed by the UH Office of Mauna Kea Management, and requires UH approval before it can proceed.

For more information on the Outrigger Telescope Project, including a copy of the Record of Decision, please visit: