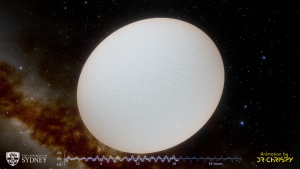 Maunakea, Hawaii – By “listening” to the “beating hearts” of stars, an international team of astronomers, including researchers from the University of Hawai’i Institute for Astronomy (UH IfA), detected a rhythm of life for a class of stellar objects that puzzled scientists until now.

The findings are an important contribution to the overall understanding of what goes on inside trillions of stars across the cosmos.

“The signals from these stars have been a mystery for over a hundred years,” Huber said. “We knew that brightness variations in these stars are caused by sound waves traveling in their interior, but we just couldn’t make any sense of them.”

The international team led by Professor Tim Bedding at the University of Sydney used data from NASA’s Transiting Exoplanet Survey Satellite (TESS), a space telescope used to detect planets around nearby stars. It provided the team with brightness measurements of thousands of stars, allowing them to find 60 whose pulsations were ripe for study.

“NASA’s TESS data has delivered precise detections in a much larger number of these stars than we had before. This has now finally cleared up the picture, and we were able to identify regular structures. It’s like notes of a song finally falling into place to play a beautiful melody,” Huber explained.

Simulation of pulsations in the Delta Scuti variable star called HD 31901, based on brightness measurements by NASA’s Transiting Exoplanet Survey Satellite (TESS). The simulation has been sped up by a factor of 2646 so that 24 hours of TESS data lasts 33 seconds. CREDIT: C. BOSHUIZEN/S. MURPHY/T. BEDDING

A WINDOW TO OUR PAST

The stars analyzed in the study are about 1.5 to 2.5 times more massive than the Sun and are known as Delta Scuti stars. Within the past few decades, astronomers have been able to detect the internal oscillations of stars, revealing their structure by studying stellar pulsations using careful and precise measurements of changes in light output. Over periods of time, brightness variations reveal intricate—and often regular—patterns, allowing researchers to stare into the very heart of the massive nuclear furnaces that light the universe. This branch of science, known as asteroseismology, enables astronomers to understand the insides of distant stars similar to how earthquakes are used to decipher the interior structure of our planet.

The research team’s identification of regular patterns in Delta Scuti stars will dramatically expand the reach of asteroseismology.

“Young stars like these are among the most intriguing and important objects in astronomy,” said Gaidos. “They allow us to see how stars and their planets form and change with time much as the Solar System did more than 4 billion years ago. They are a window into our past.”

“Our observations with Keck showed that most Delta Scuti stars with regular patterns appear to be spinning slower than normal,” Huber said. “We believe that this is one of the key pieces to explain their clear frequency patterns, and this will be critical to find more of them in the future.”

“This is really exciting work,” said John O’Meara, chief scientist at Keck Observatory. “It uses the combination of HIRES and TESS, data usually focused on finding exoplanets, to look deep into the hearts of stars and start to solve another mystery about them. I look forward to more of these types of measurements as the TESS mission goes on; Keck and HIRES are ready.”

NASA has funded multiple TESS-related research projects at UH totaling nearly one million dollars at the university since the launch of the TESS telescope in April 2018.