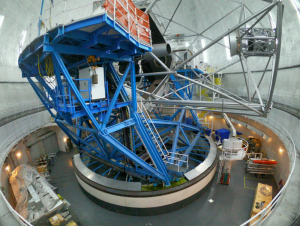 The pier supporting the telescope is pictured here covered with white drywall.

KAMUELA, HI – W. M. Keck Observatory officials yesterday notified the Hawaii Department of Health (HDOH) that they detected a small seepage of oil from the hydraulic system supporting the Keck I telescope and have acted immediately to contain the oil.

“We are taking this situation very seriously and have engaged all appropriate authorities,” said Richard Matsuda, chief of operations for Keck Observatory.

In the course of unrelated maintenance, observatory technicians discovered the hydraulic oil seepage on the pier wall supporting the Keck I telescope on April 19 on an area normally concealed behind drywall inside the telescope facility.Keck Observatory technicians removed all remaining drywall from the pier at the base of Keck I on Monday, June 4. Close inspection found a total of six potential areas on the pier supporting Keck I where slow seepage may be occurring.

On June 4, technicians extracted samples of cinder from a narrow isolation joint, or seam, in the floor of Keck I. The cinder sample appeared to be wet; Keck Observatory sent an immediate notification to HDOH.

“While we took immediate steps to contain the initial oil seepage, we were slow to launch a full investigation, a delay that I regret and for which I take full responsibility,” said Hilton Lewis, Keck Observatory director. “We are now giving this investigation the full attention it requires as the top priority for the observatory.”

Keck Observatory officials have retained the environmental, geotechnical and hydrogeological consulting and engineering firm Masa Fujioka and Associates to conduct an independent investigation of the seepage and recommend appropriate remedial measures, if necessary, in consultation with HDOH and Office of Maunakea Management.

Keck Observatory is acting in accordance with the procedures set forth in the Hazard Evaluation and Emergency Response (HEER) Office of the Hawaii Department of Health (HDOH) technical guidance manual.

Additional updates will be issued as the investigation progresses and will be posted to www.keckobservatory.org/responsibility.